BOULDER—A new analysis of the unusually long solar cycle that ended in 2008 suggests that one reason for the long cycle could be a stretching of the Sun’s conveyor belt, a current of plasma that circulates between the Sun’s equator and its poles. The results should help scientists better understand the factors controlling the timing of solar cycles and could lead to better predictions.

The study was conducted by Mausumi Dikpati, Peter Gilman, and Giuliana de Toma, all scientists in the High Altitude Observatory at the National Center for Atmospheric Research (NCAR), and by Roger Ulrich at the University of California, Los Angeles. It appeared on July 30 in Geophysical Research Letters. The study was funded by the National Science Foundation, NCAR’s sponsor, and by NASA's Living with a Star Program.

The Sun goes through cycles lasting approximately 11 years that include phases with increased magnetic activity, more sunspots, and more solar flares, than phases with less activity. The level of activity on the Sun can affect navigation and communications systems on Earth. Puzzlingly, solar cycle 23, the one that ended in 2008, lasted longer than previous cycles, with a prolonged phase of low activity that scientists had difficulty explaining.

The new NCAR analysis suggests that one reason for the long cycle could be changes in the Sun’s conveyor belt. Just as Earth’s global ocean circulation transports water and heat around the planet, the Sun has a conveyor belt in which plasma flows along the surface toward the poles, sinks, and returns toward the equator, transporting magnetic flux along the way.

“The key for explaining the long duration of cycle 23 with our dynamo model is the observation of an unusually long conveyor belt during this cycle,” Dikpati says. “Conveyor belt theory indicates that shorter belts, such as observed in cycle 22, should be more common in the Sun.”

Recent measurements gathered and analyzed by Ulrich and colleagues show that in solar cycle 23, the poleward flow extended all the way to the poles, while in previous solar cycles the flow turned back toward the equator at about 60 degrees latitude. Furthermore, as a result of mass conservation, the return flow was slower in cycle 23 than in previous cycles. 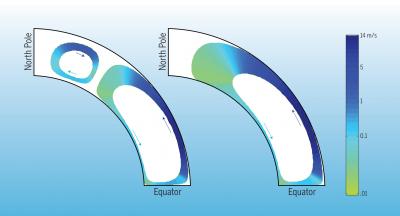 An NCAR model of magnetic flux below the Sun’s surface, developed by Mausumi Dikpati and colleagues, shows the extended reach of flux transport during the solar cycle that ended in 2008 (right), compared to the previous cycle (left). The larger loop is believed to be related to the extended duration of the cycle. (Image courtesy UCAR.) News media terms of use*

In their paper, Dikpati, Gilman, and de Toma used simulations to model how the solar plasma conveyor belt affected the solar cycle. The authors found that the longer conveyor belt and slower return flow could have caused the longer duration of cycle 23.

The NCAR team’s computer model, known as the Predictive Flux-transport Dynamo Model, simulates the evolution of magnetic fields in the outer third of the Sun’s interior (the solar convection zone). It provides a physical basis for projecting the nature of upcoming solar cycles from the properties of previous cycles, as opposed to statistical models that emphasize correlations between cycles. In 2004, the model successfully predicted that cycle 23 would last longer than usual.

According to Dikpati, the duration of a solar cycle is probably determined by the strength of the Sun’s meridional flow. The combination of this flow and the lifting and twisting of magnetic fields near the bottom of the convection zone generates the observed symmetry of the Sun’s global field with respect to the solar equator.

“This study highlights the importance of monitoring and improving measurement of the Sun’s meridional circulation,” Ulrich says. “In order to improve predictions of the solar cycle, we need a strong effort to understand large-scale patterns of solar plasma motion.”

Title: Impact of changes in the Sun's conveyor-belt on recent solar cycles