BOULDER—In a bid to unlock longstanding mysteries of the Sun, including the impacts on Earth of its 11-year cycle, an international team of scientists has successfully probed a distant star. By monitoring the star’s sound waves, the team has observed a magnetic cycle analogous to the Sun’s solar cycle.

The study, conducted by scientists at the National Center for Atmospheric Research (NCAR) and colleagues in France and Spain, is being published this week as a “Brevia” in Science.

Distant star's inner secrets revealed by sound waves. Using data captured by the French-led Convection Rotation and planetary Transits (CoRoT) satellite, scientists have successfully probed a distant star, using a technique called stellar seismology to monitor changes in the star's sound waves. Using that technique, the international team detected "starspots"—areas of intense magnetic activity on the surface that are similar to sunspots. While scientists had previously observed these magnetic cycles in other stars, this was the first time astronomers have discovered such a cycle using stellar seismology.

This video includes observations of the Sun and animations illustrating the research findings. Observations have shown that the magnetism of the Sun is constantly rearranging itself, ejecting hot gas out into the solar system that can interfere with satellites and damage electrical grids on Earth.

The Sun's magnetic field gets stronger and weaker on an 11-year cycle, and similar magnetic cycles have been observed in dozens of other stars.

The CoRoT satellite was launched in 2006 to study the oscillations of stars similar to our Sun, and to search for planets circling those stars.

CoRoT monitored a star known as HD49933 for more than 180 days, revealing a magnetic cycle much shorter than the Sun's. It's the shortest cycle ever observed in another star—less than a year. In comparison, the Sun's cycle lasts 11 years; only about half of it is shown in this video.

The side-by-side animation compares the much shorter HD49933 cycle (at left) with about half of the 11-year solar cycle of our Sun (at right). The distant HD49933 is actually much larger than our nearby star, the Sun.

If such short cycles turn out to be common, NASA's Kepler mission will find them in many more stars—providing valuable data to help astronomers understand the inner workings of our own star.

Reporters may contact Rachael Drummond for high-resolution version. (Produced by the Institute of Astrophysics of the Canaries (IAC) and the National Center for Atmospheric Research.)

The scientists studied a star known as HD49933, which is located 100 light years from Earth in the constellation Monoceros, the Unicorn, just east of Orion. The team examined the star’s acoustic fluctuations, using a technique called “stellar seismology.” They detected the signature of “starspots,” areas of intense magnetic activity on the surface that are similar to sunspots. While scientists have previously observed these magnetic cycles in other stars, this was the first time they have discovered such a cycle using stellar seismology.

“Essentially, the star is ringing like a bell,” says NCAR scientist Travis Metcalfe, a co-author of the new study. “As it moves through its starspot cycle, the tone and volume of the ringing changes in a very specific pattern, moving to higher tones with lower volume at the peak of its magnetic cycle.”

“We’ve discovered a magnetic activity cycle in this star, similar to what we see with the Sun,” says co-author and NCAR scientist Savita Mathur. “This technique of listening to the stars will allow us to examine potentially hundreds of stars.”

The team hopes to assess the potential for other stars in our galaxy to host planets, including some perhaps capable of sustaining life.

“Understanding the activity of stars harboring planets is necessary because magnetic conditions on the star’s surface could influence the habitable zone, where life could develop,” says CEA-Saclay scientist Rafael Garcia, the study’s lead author.

Studying many stars with stellar seismology could help scientists better understand how magnetic activity cycles can differ from star to star, as well as the processes behind such cycles. The work could especially shed light on the magnetic processes that go on within the Sun, furthering our understanding of its influence on Earth’s climate. It may also lead to better predictions of the solar cycle and resulting geomagnetic storms that can cause major disruption to power grids and communication networks.

In addition to NCAR, the team’s scientists are from France’s Center for Nuclear Studies of Saclay (CEA-Saclay), Paris/Meudon Observatory (OPM), the University of Toulouse, and Spain’s Institute of Astrophysics of the Canaries (IAC). The research was funded by the National Science Foundation, which is NCAR’s sponsor, the CEA, the French Stellar Physics National Research Plan, and the Spanish National Research Plan. 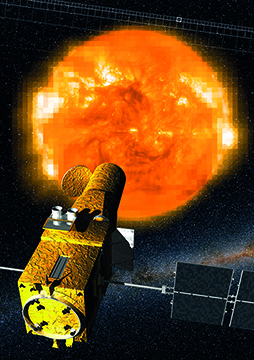 Listening to a star's secrets. Using data captured by the French-led Convection Rotation and planetary Transits (CoRoT) satellite, scientists have successfully probed a distant star, using a technique called stellar seismology to monitor the star's acoustic fluctuations. They detected "starspots"—areas of intense magnetic activity on the surface that are similar to sunspots. While scientists had previously observed these magnetic cycles in other stars, this was the first time they discovered such a cycle using stellar seismology. (Image courtesy Institute of Astrophysics of the Canaries, IAC).

Launched on December 27, 2006, CoRoT was developed and is operated by the French National Center for Space Studies (CNES) with contributions from Austria, Belgium, Brazil, Germany, Spain, and the European Space Agency. CoRoT is equipped with a 27-centimeter (11-inch) diameter telescope and a 4-CCD (charge-coupled device) camera sensitive to tiny variations in the light intensity from stars.

The study authors found that HD49933 is much bigger and hotter than the Sun, and its magnetic cycle is much shorter. Whereas past surveys of stars have found cycles similar to the 11-year cycle of the Sun, this star has a cycle of less than a year.

This short cycle is important to scientists because it may enable them to observe an entire cycle more quickly, thereby gleaning more information about magnetic patterns than if they could only observe part of a longer cycle.

The scientists plan to expand their observations by using other stars observed by CoRoT as well as data from NASA’s Kepler mission, launched in March 2009. Kepler is seeking Earth-sized planets to survey. The mission will provide continuous data over three to five years from hundreds of stars that could be hosting planets.

“If it turns out that a short magnetic cycle is common in stars, then we will potentially observe a large number of full cycles during Kepler’s mission,” says Metcalfe. “The more stars and complete magnetic cycles we have to observe, the more we can place the Sun into context and explore the impacts of magnetic activity on possible planets hosted by these stars.”

The team has spent the past six months exploring the structure and dynamics of HD49933 and classifying its size. They will next verify their observations using ground-based telescopes to confirm the magnetic activity of the star. When the star reemerges from behind the Sun in September, they hope to measure the full length of the cycle. The CoRoT mission was designed to collect up to 150 days of continuous data at a time, which was not enough to determine the exact length of the star’s cycle.