BOULDER—A new study sheds light on why the Sun’s outer atmosphere, or corona, is about 200 times hotter than its surface. The research, led by the National Center for Atmospheric Research (NCAR), may bring scientists a step closer to understanding the solar cycle and the Sun’s impacts on Earth.

The study uses satellite observations to reveal that magnetic oscillations carrying energy from the Sun’s surface into its corona are far more vigorous than previously thought. These waves are energetic enough to heat the corona and drive the solar wind, a stream of charged particles ejected from the Sun that affects the entire solar system.

“We now understand how hot mass can shoot upward from the solar interior, providing enough energy to maintain the corona at a million degrees and fire off particles into the high-speed solar wind,” says Scott McIntosh, the study’s lead author and a scientist in NCAR’s High Altitude Observatory. “This new research will help us solve essential mysteries about how energy gets out of the Sun and into the solar system.”

The study, published this week in the journal Nature, was conducted by a team of scientists from NCAR, Lockheed Martin Solar and Astrophysics Lab, Norway’s University of Oslo, and Belgium’s Catholic University of Leuven. It was funded by NASA. NCAR is sponsored by the National Science Foundation.

(repeating 2-second loop)
Researchers pushed the resolution capabilities of the Atmospheric Imaging Assembly's telescope to the limit. These closeups of 2 seconds of data (looped repeatedly) zoom in on an area spanning about 27,000 by 27,000 miles (43,500 by 43,500 km), the same area highlighted by the white box at upper left in the righthand panel of Movie 1. The resulting grainy images provide the first-ever view of data confirming the role of Alfvén waves in transporting a significant amount of energy through the corona. The waves cause high-speed jets of hot material associated with spicules to sway, or wiggle side to side. These new satellite observations have revealed that the wiggling waves are over a hundred times stronger than previously measured, with amplitudes on the order of 12 miles per second (20 km/sec)—enough to heat the Sun’s outer atmosphere to over a million degrees and drive the solar wind. (Visualizations by Scott McIntosh, NCAR, of data from the Atmospheric Imaging Assembly, a package of instruments aboard NASA’s Solar Dynamics Observatory. ©UCAR. This video is freely available for media and nonprofit use.) | More images >

The flow of mass and energy from the corona influences how much ultraviolet radiation reaches Earth. It also drives upper-atmospheric disturbances known as geomagnetic storms, which can disrupt technologies ranging from telecommunications to electrical transmission.

The new study focuses on the role of oscillations in the corona, known as Alfvén waves, in moving energy through the corona.

Alfvén waves were directly observed for the first time in 2007. Scientists recognized them as a mechanism for transporting energy upward along the Sun’s magnetic field into the corona. But the 2007 observations showed amplitudes on the order of about 1,600 feet (0.5 kilometers) per second, far too small to heat the corona to its high levels or to drive the solar wind.

The new satellite observations used in the current study reveal Alfvén waves that are over a hundred times stronger than previously measured, with amplitudes on the order of 12 miles (20 km) per second—enough to heat the Sun’s outer atmosphere to millions of degrees and drive the solar wind. The waves are easily seen in high-resolution images of the outer atmosphere as they cause high-speed jets of hot material, called spicules, to sway.

“The new satellite observations are giving us a close look for the first time at how energy and mass move through the Sun’s outer atmosphere,” McIntosh says.

The research builds on ongoing efforts to study the connection between spicules and Alfvén waves. Scientists have known about spicules for decades but were unable to determine if their mass got hot enough to provide heat for the corona until earlier this year, when McIntosh and colleagues published research in the journal Science that used satellite observations to reveal that a new class of the phenomenon, dubbed “Type II” spicules, moves much faster and reaches coronal temperatures. (Related news release, January 2011.)

The new study reveals the role of Alfvén waves. These oscillations play a critical role in transporting heat from the Sun by riding on the spicules and carrying energy into the corona. 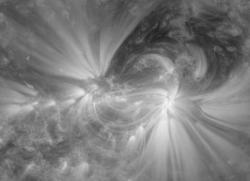 A satellite-derived image, looking down on a layer of the Sun's atmosphere, or corona, at which the temperature is 1 million degrees kelvin (1MK, or 1.8 million degrees Fahrenheit). In this cropped, still image from Movie 1, the curved lines are coronal loops, most likely composed of hot plasma flowing along magnetic field lines. Some coronal loops are so long that their tops extend beyond the field of view. (Visualization by Scott McIntosh, NCAR, of data from the Atmospheric Imaging Assembly, a package of instruments aboard NASA’s Solar Dynamics Observatory. ©UCAR. This image is freely available for media and nonprofit use.) |More images >

The critical satellite observations described in the study come from the Atmospheric Imaging Assembly, a package of instruments aboard NASA’s Solar Dynamics Observatory, which was launched in 2010. The instruments boast high spatial and temporal resolution, enough to detect structures and motions across regions of the Sun as small as 310 miles (500 km) and generate images every 12 seconds at different wavelengths.

“It’s like getting a microscope to study the Sun’s corona, giving us the spatial and temperature coverage to focus in on the way mass and energy circulate.” McIntosh says.

Now that the real power of the waves has been revealed in the corona, the next step in unraveling the mystery of its extreme heat is to study how the waves lose their energy, which is transferred to plasma. To do that, scientists will need to develop computer models that are fine enough in detail to capture how the jets and waves work together to power the atmosphere. By studying the Sun’s underlying physics with these tools, scientists could better understand the Sun’s 11-year sunspot cycle and its impacts on Earth. 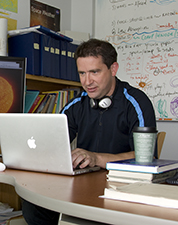 Scott McIntosh, NCAR scientist. (©UCAR. Photo by Carlye Calvin. This image is freely available for media and nonprofit use.)