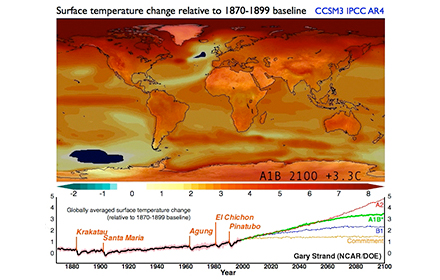 Climate Change Simulation, 1870–2100
This animation depicts global surface warming as simulated by the NCAR-based Community Climate System Model (CCSM). It shows warming and cooling compared to average temperatures at the end of the 19th century. (These departures from the average are called temperature anomalies.) The map shows warming and cooling over the entire globe; the graph displays the global average temperature, year by year. Several major volcanic eruptions (such as Agung on the island of Bali in 1963) are noted in the graph and the subsequent cooling is seen in the animation. Click here to open a Web page where the animation can be launched in a variety of formats. (©UCAR.) News media terms of use* 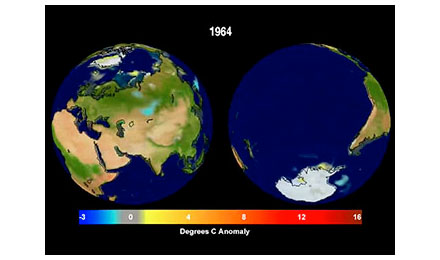 Dual-globe View, Climate Change Simulation, 1870–2100
This animation depicts global surface warming as simulated by the NCAR-based Community Climate System Model (CCSM). It shows warming and cooling compared to average temperatures at the end of the 19th century. (These departures from the average are called temperature anomalies.) The greater difference from average at the poles is due to "polar amplification," a warming feedback loop as sea ice melts, warm water migrates poleward, and open water absorbs more sunlight. Click here or on the image to open a Web page where the animation can be launched in a variety of formats. (©UCAR.) News media terms of use* 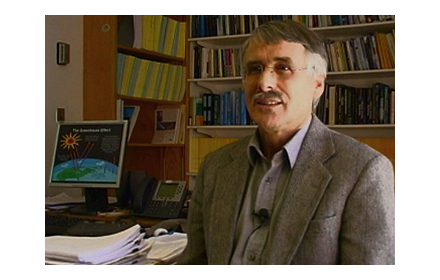 NCAR scientist discusses 2007 IPCC report
Kevin Trenberth, a senior scientist at NCAR and one of the major authors of the 2007 assessment by the Intergovernmental Panel for Climate Change, explains why the IPCC reports are an authoritative source of climate change information. The IPCC, a group representing over 180 governments, conducts assessments of global climate change by hundreds of scientists who are experts in the field. It operates under the auspices of the U.N. Environment Programme and the World Meteorological Organization. Click here or on the image to launch the webcast. (©UCAR; running time: 4 minutes.) News media terms of use* 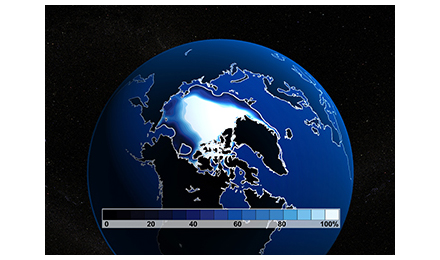 Arctic Sea Ice, Summer Minimum, 1990–2049
This animation, based on simulations produced by the NCAR-based Community Climate System Model, show the year-to-year variability of Arctic sea ice. For much of the 20th century, the model accurately captures the expansion and contraction of the area covered by sea ice from one late summer to the next, based on natural climate cycles. By the end of the 20th century, however, the ice began to retreat significantly because of global warming.Within a few decades or sooner, the model simulations show that the ice is likely to shrink abruptly, losing about two-thirds of its area over the course of about a decade. By about 2040, the Arctic may be nearly devoid of sea ice during the late summer unless greenhouse gas emissions are significantly curtailed. Click here or on the image to open a Web page with two stills and the animation, which can be launched in a variety of formats. (©UCAR.) News media terms of use*

Climate Change: Fitting the Pieces Together
Is global warming real? Why should we care? What can be done about it? This interactive, illustrated online course, originally created for broadcast meteorologists, is also a great introduction for the general public. Free registration required to view this interactive course. Produced by UCAR's COMET Program. (©UCAR.) COMET terms of use 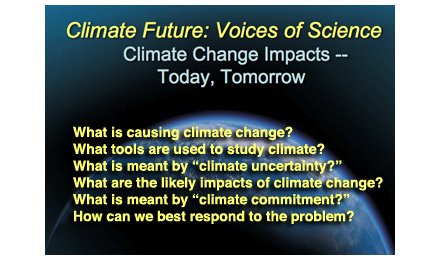 Climate Future: Voices of Science
Some of NCAR's most prominent scientists weigh in on key questions about climate change in these short interviews, produced by NCAR Education and Outreach. Click here or on the image to open a Web page where the webcast can be launched. (©UCAR.) News media terms of use* 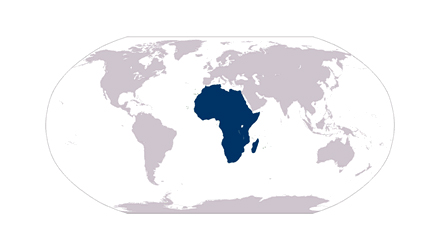 Maps highlighting potential environmental impacts of climate change. The selected impacts are based on the region-by-region analysis conducted by IPCC Working Group II. The IPCC has assigned "high confidence" to these projected impacts unless otherwise stated. Click here or on the image to open a new page with the maps and descriptions. (©UCAR. News media terms of use.) 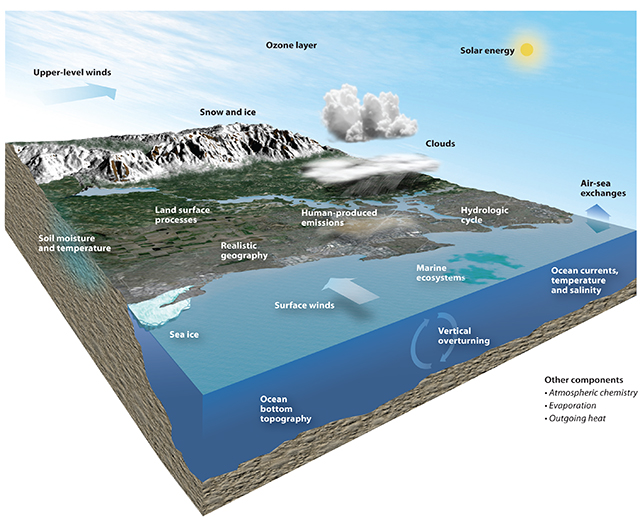 The NCAR-based Community Earth System Model (CESM) is one of the world’s most sophisticated models of global climate. Created by scientists at NCAR, the Department of Energy, and collaborators, this powerful model simulates the many processes in our climate system, ranging from clouds and atmospheric chemicals to ice to marine ecosystems. Click here or on the image for descriptions. (©UCAR. This image is freely available for media and nonprofit use)

The complexity of global climate models has increased enormously over the last four decades, as shown in this graphic. The most powerful models, such as the Community Earth System Model (developed by scientists at the Department of Energy and NCAR with colleagues at other organizations), now have the capability of simulating a broad range of atmospheric processes, such as the impact of marine ecosystems on the atmosphere. Click here or on the image to enlarge. (©UCAR. This image is freely available for media and nonprofit use*) 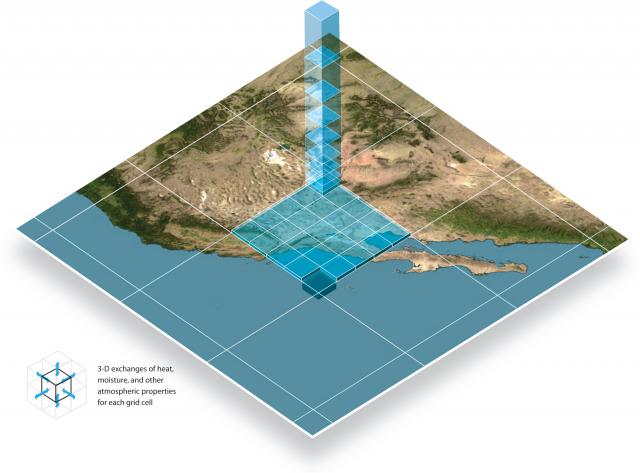 Computer models reach high into a virtual atmosphere and deep into the ocean. They simulate climate by dividing the world into into 3-dimensional grid boxes, measuring physical processes such as temperature at each grid point. Models can be used to simulate changes in climate over years, decades, or even centuries. (©UCAR. This image is freely available for media use. For more information, see  News media terms of use*) 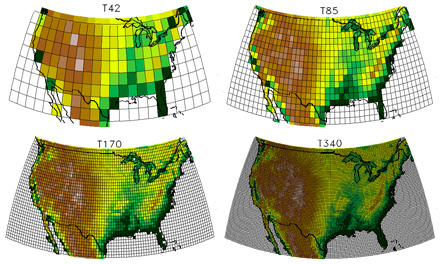 This illustration shows how the amount of detail in climate models has increased in recent years, largely because of the calculation power provided by newer supercomputers. In the 1990s, high-resolution global climate models operated on the T42 resolution scheme (upper left). At this resolution, temperature, moisture, and other features were tracked in grid boxes that each spanned about 200 by 300 kilometers at midlatitudes (120 x 180 miles), an area roughly as large as West Virginia.

In more recent modeling that led up to the 2007 IPCC Working Group I report, the NCAR-based Community Climate System Model (CCSM) routinely operated at T85 resolution (upper right), with midlatitude grid points of about 100 by 150 km (60 x 90 miles)—the size of Connecticut.

Better resolution not only provides a more true-to-life depiction of atmospheric processes, but also allows for more realistic topography, which makes regional climate projections more accurate. For example, the highest Rocky Mountains appear as two coarse grid points at T42 but as a more diverse assortment of high peaks at T170 (lower left). Enhancements in computing power will help scientists explore the use of higher resolutions, such as T170 and T340 (lower right). Click here or on the image to enlarge. (©UCAR, illustration courtesy Warren Washington, NCAR.) News media terms of use*

Find visuals to illustrate climate change in the NCAR|UCAR Image and Multimedia Gallery.