Weather’s role in determining when people will become infected

July 9, 2014 | Warmer temperatures, higher humidity, and less rain are correlated with an earlier start and peak of each year’s Lyme disease season, researchers have found. Using the dates of Lyme disease cases reported to the U.S. Centers for Disease Control and Prevention (CDC) and meteorological data from 1992 to 2007, researchers at NCAR and the CDC have for the first time analyzed the timing of the warm-season ramp-up of Lyme disease transmission. The research should help forecasters develop predictions of the onset and peak of future Lyme disease seasons. 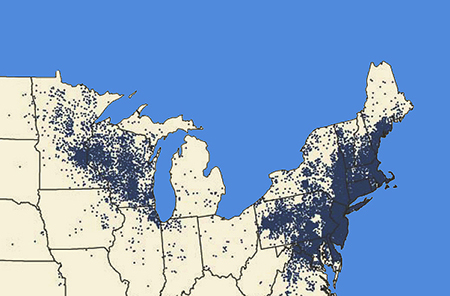 Lyme disease is a tick-borne illness primarily found in the northeastern United States (from southern Maine to northern Virginia) and Wisconsin and Minnesota. The start and peak of the human infection season occur earlier in the spring in southern states, and later in northern states, but vary overall from year to year.

The researchers found that for all but the northernmost states, higher cumulative temperatures above a baseline of 50°F (10°C) measured from the beginning of the year were reliably associated with an earlier start to the Lyme disease season. For all regions, a greater amount of precipitation accumulating from the start of the year was consistently associated with a later beginning to the season. The start of the Lyme disease season (defined as the week the number of Lyme disease cases increased most rapidly) varied by up to 6 weeks in the same state over the 16-year period analyzed. The average season begins in late May and lasts for 14 weeks.

The team of researchers, led by Sean Moore, a former public health and climate postdoctoral fellow at NCAR and the CDC, published the findings earlier this year in the American Journal of Tropical Medicine and Hygiene. NCAR scientist Andrew Monaghan supervised the team’s meteorological analysis.

“While you can predict the Lyme season more accurately as the beginning of the season nears, we found that, by looking at the daily temperatures out to the 10th week of the year, we could predict the start of the season almost as well as waiting until the 20th week,” Monaghan said. With more validation, the CDC could eventually use the analysis to provide public warnings about the likelihood of encountering ticks bearing Lyme disease, he said.

Lyme disease is the most common vector-transmitted disease in the United States. It may progress from causing a characteristic bull’s-eye rash to triggering serious neurological or heart problems, meningitis, or arthritis, if left untreated. It is caused by a bacterial spirochete that is primarily transmitted by Ixodid ticks. The ticks pass on the bacteria when they attach to mammals to obtain the blood they need to complete each of three developmental stages. Nymphal ticks, which are about the size of a poppy seed, cause most of the cases of Lyme disease in humans because their small size makes them very hard to find and remove.

Nymphal ticks develop faster with warmer temperatures, and more actively seek hosts for a blood meal between late spring and fall when there are warmer temperatures, higher humidity, and the absence of heavy precipitation. These same weather conditions are also ones that encourage people to spend more time outside, the researchers noted. The availability of other hosts, such as rodents and deer, also plays a role in maintaining tick populations and may increase the transmission of Lyme disease.