BOULDER – Scientists at the National Center for Atmospheric Research (NCAR) and partner organizations are launching a major field project across the northern Front Range of Colorado this month to track the origins of summertime ozone, an invisible but harmful pollutant.

The public is invited to visit with the pilots, engineers, and scientists working on the Front Range Air Pollution and Photochemistry Experiment, or FRAPPÉ. Please wear close-toed shoes and bring up to 3 children per adult, 6 years and older. More info >

The researchers will use specially equipped aircraft, mobile radars, balloon-mounted sensors, and sophisticated computer simulations to measure local and far-flung pollution sources. Results from the month-long study will provide needed information to officials seeking to ensure that air in the region is healthy to breathe.

It marks one of the largest research projects to look at summertime air pollution on the northern Front Range, including Denver, which often exceeds federal standards for safe levels of ground-level ozone pollution despite efforts to reduce emissions. Ozone can lead to increased asthma attacks and other respiratory ailments. It also damages vegetation, including crops. 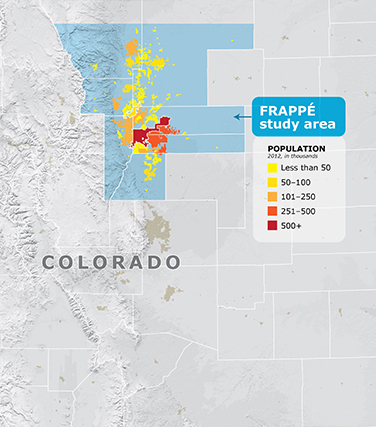 FRAPPÉ will sample and examine the atmospheric conditions pertaining to air quality across the northern Front Range of Colorado, including the urban corridor from south of Denver to Fort Collins as well as the adjacent plains and mountains. Study area is indicated in blue. (©UCAR. This image is freely available for media & nonprofit use.)

“Our goal is to produce an accurate and detailed view of all the diverse sources of ozone pollution along the Front Range,” said NCAR scientist Gabriele Pfister, a principal investigator on the project. “We want to fingerprint where the pollution comes from and analyze what happens when it mixes in the atmosphere.”

Known as the Front Range Air Pollution and Photochemistry Experiment (FRAPPÉ), the study will track emissions from both human-related activities and natural sources. It will focus on the urban corridor from south of Denver, north to Fort Collins, as well as the adjacent plains and mountains. Scientists also want to determine how much pollution comes from upwind areas, including other states and countries.

Funded through a federal-state partnership, FRAPPÉ is supported by the Colorado Department of Public Health and Environment and by the National Science Foundation, which is NCAR’s sponsor.

To provide additional detail across the region, scientists will closely coordinate FRAPPÉ with a second air quality mission taking place on the Front Range at the same time. DISCOVER-AQ (Deriving Information on Surface Conditions from Column and Vertically Resolved Observations Relevant to Air Quality) is a major study led by NASA that seeks to improve the ability of satellites to usefully assess our air quality.

“What we learn from these flights will help us to better interpret satellite remote sensing of air quality from geostationary orbit in the future,” said NASA scientist Jim Crawford, a principal investigator on DISCOVER-AQ. “It also will help us to define the best combination of instruments on the ground to connect air quality monitoring networks with satellite information.”

The DISCOVER-AQ flights and ground observations will focus on the northern Front Range, while FRAPPÉ will gather measurements from the surrounding region.

In all, approximately 200 scientists, technicians, pilots, and students from around the country will converge on the Front Range for the combined projects.

The researchers will quantify emissions from industrial facilities, power plants, motor vehicles, agricultural operations, oil and gas drilling, fires, and other sources. They also will measure naturally occurring emissions from trees and other plants that then combine with emissions generated by human activity to form ozone and other pollutants.

Colorado, like other states, relies on a limited number of ground-based stations to monitor air quality and help guide statewide policies and permitting. But a full, three-dimensional picture of the processes that affect air quality, including conditions far upwind and high up in the atmosphere, requires a three-pronged approach with measurements from aircraft, satellites, and the ground. 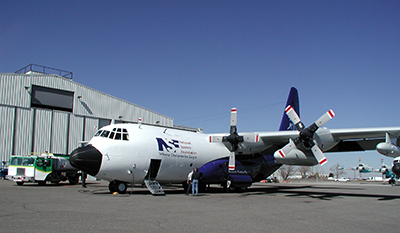 The NSF/NCAR C-130 aircraft, one of the aircraft involved in FRAPPÉ, is based at NCAR’s Research Aviation Facility (RAF) at Rocky Mountain Metropolitan Airport in Broomfield, Colorado. RAF develops and operates instrumented research aircraft for the atmospheric science community. (©UCAR, photo by Carlye Calvin. This image is freely available for media & nonprofit use.)

“By bringing together aircraft, satellites, and ground-based instruments, we can analyze the amounts and types of pollutants that are emitted in the Front Range as well as transported from other places, how they evolve, and how air circulation patterns near the mountains move them around,” said NCAR scientist Frank Flocke, a principal investigator on FRAPPÉ.

During the projects, which run from July 16 to mid-August, Front Range residents may notice occasional low-flying research aircraft that are taking measurements of the atmosphere. The aircraft will spiral down at times, taking samples of air as they spiral directly above ground instruments that will be measuring air at the surface and observing the atmosphere above.

Ozone, a principal component of smog, forms from the reaction of hydrocarbons and carbon monoxide in the presence of nitrogen oxides (NOx) and sunlight. It peaks during summer months when sunlight is strongest and air conditions are more likely to be stagnant.

Although the scientists will focus on ozone, they will also measure the size and chemical composition of airborne particles to better quantify particle pollution and track its sources. Microscopic airborne particles can have a major impact on people’s respiratory health.

The data gathered by the projects will go through a quality assurance process and then become publicly available in about six months. Scientists will use the data to begin publishing research results in about a year.

An armada of instruments

FRAPPÉ and DISCOVER-AQ will use similar payloads for their aircraft. The teams will conduct wingtip-to-wingtip intercomparison flights several times during the project, sampling air in the same place to make sure the instrument readings are comparable.

A network of instruments on towers, rooftops, and other sites will continuously monitor ozone and the gases that react to form it. Other ground-based activities, such as measurements from tethered balloons and from lidars (laser-based radars), will be closely coordinated with the flights. The researchers will draw on forecasts and nowcasts of both weather and air quality from a large number of computer models to assess daily conditions and make final decisions on when to fly and where to gather atmospheric samples.

“This is a unique opportunity for the state to work with others on a study that combines ground-based measurements with aircraft-borne sensing,” said Will Allison, director of the Colorado Department of Public Health and Environment’s Air Pollution Control Division. “It will help us more fully understand complex questions such as the factors contributing to ozone formation in the region. And that will help us continue to implement effective measures to reduce air pollution.”

“FRAPPÉ is a major collaborative study that will produce the most complete picture ever of summertime air pollution on the Front Range,” said Thomas Bogdan, president of the University Corporation for Atmospheric Research, which manages NCAR. “This effort will dramatically advance our understanding of air quality and its potential impacts. The results have the potential to help not only people living on Colorado's Front Range, but residents of other metropolitan areas with similar conditions, too.”