BOULDER -- Unregulated trash burning around the globe is pumping far more pollution into the atmosphere than shown by official records. A new study led by the National Center for Atmospheric Research estimates that more than 40 percent of the world’s garbage is burned in such fires, emitting gases and particles that can substantially affect human health and climate change.

The new study provides the first rough estimates, on a country-by-country basis, of pollutants such as particulates, carbon monoxide, and mercury that are emitted by the fires. Such pollutants have been linked to serious medical issues.

Unlike emissions from commercial incinerators, the emissions from burning trash in open fires often go unreported to environmental agencies and are left out of many national inventories of air pollution. For that reason, they are not incorporated into policy making.

“Air pollution across much of the globe is significantly underestimated because no one is tracking open-fire burning of trash,” said NCAR scientist Christine Wiedinmyer, lead author of the new study. “The uncontrolled burning of trash is a major source of pollutants, and it’s one that should receive more attention.”

Quantifying the extent of burning trash may change how policy makers track emissions, as well as how scientists incorporate air pollution into computer models used to study the atmosphere.

Because trash burning is unregulated and unmonitored, Wiedinmyer said that actual emissions could be larger or smaller than the study’s estimates by a factor of two. Still, the analysis represents the most comprehensive effort to date to account for emissions from trash burning.

The new study, published in Environmental Science & Technology, was funded by the National Science Foundation, which is NCAR’s sponsor. It was co-authored by scientists from the University of Montana and the U.S. Environmental Protection Agency who were also involved in measuring the composition of trash-burning emissions. 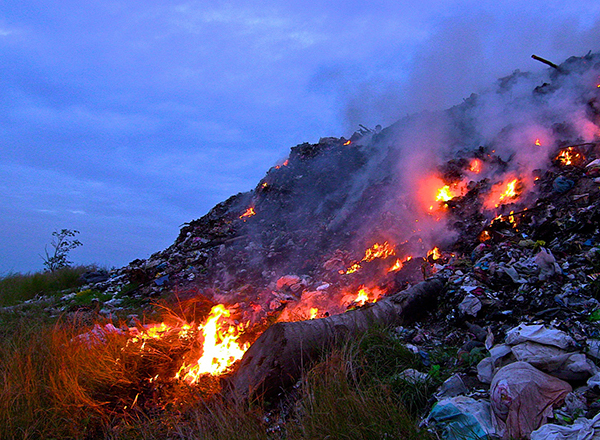 Trash burning is a global phenomenon. But it is most prevalent in developing countries where there are fewer trash disposal facilities, such as landfills and incinerators.

The amount of garbage burned in remote villages and crowded megacities is likely on the rise, as more people worldwide are consuming more goods. The trash often contains discarded plastics and electronics as well as traditional materials such as food scraps and wood.

Wiedinmyer began wondering about the impact of burning trash while visiting remote villages in Ghana. The villages were shrouded in smoke caused in part from trash fires that smoldered all day.

To estimate emissions from trash fires, Wiedinmyer and her co-authors compared population figures and per capita waste production with official tallies of trash disposal for each country in the world. They estimated that 1.1 billion tons (1 billion metric tons), or 41 percent, of the total waste generated worldwide is disposed of through unregulated burning every year.

The countries that produce the most total waste, according to the study’s methods, are heavily populated countries with various levels of industrial development: China, the United States, India, Japan, Brazil, and Germany. But the study concluded that the nations with the greatest emissions from trash burning are populous developing countries: China, India, Brazil, Mexico, Pakistan, and Turkey.

By analyzing consumption patterns in each country, the research team then estimated the type and amount of pollutants from the fires.

The study concluded that the fires produce emissions equivale­­­nt to as much as 29 percent of officially reported human-related global emissions of small particulates (less than 2.5 microns in diameter), as well as 10 percent of mercury and 64 percent of a group of gases known as polycyclic aromatic hydrocarbons (PAHs). These pollutants have been linked to such significant health impacts as decreased lung function, neurological disorders, cancer, and heart attacks.

Trash burning in some countries accounts for particularly high quantities of certain types of pollutants. In China, for example, the emissions are equivalent to 22 percent of reported emissions of larger particles (those up to 10 microns in diameter).

The global impact on greenhouse gas emissions appears to be less, though still significant, with burning trash producing an amount of carbon dioxide equal to an estimated 5 percent of reported human-related emissions. (By comparison, the Kyoto Protocol strove for a global 5 percent cut among industrialized countries in greenhouse-gas emissions derived from fossil fuels.) In certain developing countries—such as Lesotho, Burundi, Mali, Somalia, and Sri Lanka—the trash burning produces more carbon dioxide than is tallied in official inventories. This discrepancy can be important in international negotiations over reducing greenhouse gas emissions.

Wiedinmyer said the next step in her research will be to track the pollutants to determine where they are having the greatest impacts.

“This study was a first step to put some bounds on the magnitude of this issue,” she said. “The next step is to look at what happens when these pollutants are emitted into the atmosphere—where are they being transported and which populations are being most affected.”

Note - August 27, 2014 | The discussion of statistics in paragraphs 15–17 has been revised to clarify that the estimates of emissions from open fires are being compared to preexisting emission estimates that did not include the fires. The percentage value shown for PAHs was also revised accordingly.