More accurate forecasts could save hundreds of millions of dollars

BOULDER, Colo. — A cutting edge forecasting system developed by a national team of scientists offers the potential to save the solar energy industry hundreds of millions of dollars through improved forecasts of the atmosphere.

The new system, known as Sun4CastTM, has been in development for three years by the National Center for Atmospheric Research (NCAR) in collaboration with government labs, universities, utilities, and commercial firms across the country. Funded by the U.S. Department of Energy SunShot Initiative, the system greatly improves predictions of clouds and other atmospheric conditions that influence the amount of energy generated by solar arrays.

After testing Sun4Cast at multiple sites, the research team has determined that it can be up to 50 percent more accurate than current solar power forecasts. This improved accuracy will enable utilities to deploy solar energy more reliably and inexpensively, reducing the need to purchase energy on the spot market. 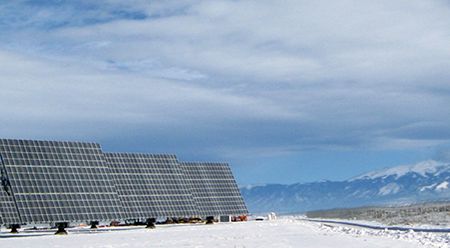 The amount of energy gathered by solar panels — such as these in Colorado's San Luis Valley — is influenced by factors including the position and types of clouds, the amount of snow on the ground, and relative humidity. The new Sun4Cast system greatly improves solar irradiance predictions, enabling utilities to deploy solar energy more reliably and inexpensively. (©UCAR. Photo by Sue Ellen Haupt, NCAR. This image is freely available for media & nonprofit use.)

As a result, utilities across the United States may be able to save an estimated $455 million through 2040 as they use more solar energy, according to an analysis by NCAR economist Jeffrey Lazo.

NCAR, which does not provide operational forecasts, makes the technology available so it can be adapted by utilities or private forecasting companies. The research is being highlighted in more than 20 peer-reviewed papers.

The work builds on NCAR’s expertise in highly detailed atmospheric prediction, including the design of an advanced wind energy forecasting system.

"This type of research and development is important because it contributes to the reduction in costs for solar and wind energy and makes it easier for utilities to integrate renewables into the electrical grid," said William Mahoney, Deputy Director of NCAR's Research Applications Laboratory. "When it comes to balancing demand for power with supply, it's vital to be able to predict sources of energy as accurately as possible."

Xcel Energy is already beginning to use the system to forecast conditions at several of its main solar facilities.

“Our previous experience with the National Center for Atmospheric Research in developing a wind forecasting system has saved millions of dollars and has been highly beneficial for our customers," said Drake Bartlett, senior trading analyst for Xcel Energy – Colorado. "It is our sincere hope and belief that we will see positive atmospheric forecasting results for predicting solar generation as well, again to the benefit of our Xcel Energy customers."

Energy forecasts out to 72 hours

In addition, forecasts extend out to 72 hours, allowing utility officials to make decisions in advance for balancing solar with other sources of energy.

Solar irradiance is notoriously difficult to predict. It is affected not just by the locations and types of clouds, but also a myriad of other atmospheric conditions, such as the amount of dust and other particles in the air, relative humidity, and air pollution. Further complicating the forecast, freshly fallen snow, nearby steep mountainsides, or even passing cumulus clouds can reflect sunlight in a way that can increase the amount of energy produced by solar panels.

To design a system to forecast solar energy output, NCAR and its partners drew on an array of observing instruments, including satellites, radars, and sky imagers; specialized software; and mathematical and artificial intelligence techniques. Central to Sun4Cast is a new computer model of the atmosphere that simulates solar irradiance based on meteorological conditions. Called WRF-SolarTM, the model is derived from the NCAR-based Weather Research and Forecasting (WRF) model, which is widely used by meteorological agencies worldwide.

The team tested the system in geographically diverse areas, including Long Island, New York; the Colorado mountains; and coastal California.

"We have to provide utilities with confidence that the system maintains a high degree of accuracy year-round in very different types of terrain," said Branko Kosovic, NCAR Program Manager for Renewable Energy.

In addition to aiding the solar power industry, the work can also improve weather forecasting in general because of improved cloud prediction.

NCAR's numerous partners on the project in the public and private sectors included:

About the SunShot Initiative

The U.S. Department of Energy SunShot Initiative is a collaborative national effort that aggressively drives innovation to make solar energy fully cost-competitive with traditional energy sources before the end of the decade. Through SunShot, the Energy Department supports efforts by private companies, universities, and national laboratories to drive down the cost of solar electricity to $0.06 per kilowatt-hour.