Scientists take to the skies to test cloud seeding

February 7, 2017 | Does cloud seeding successfully increase snowfall? This winter, scientists with the National Center for Atmospheric Research (NCAR) are taking part in a field project in Idaho that will help answer the question.

The project, called SNOWIE (Seeded and Natural Orographic Wintertime Clouds — the Idaho Experiment), is taking place from Jan. 7 to March 17 in the Payette Basin region north of Boise. A public-private partnership, SNOWIE is led by scientists at the University of Wyoming and other universities in collaboration with NCAR, with funding from the National Science Foundation (which is NCAR's sponsor) and the Idaho Power Company.

The research team is using airborne and ground-based radars, high-resolution snow gauges, and computer modeling to gain insights into what happens after clouds are seeded with silver iodide. Snow from winter storms develops when ice crystals form on dust and other particles known as "ice nuclei." In cloud seeding, silver iodide is used to make artificial nuclei to encourage snowflakes to form. 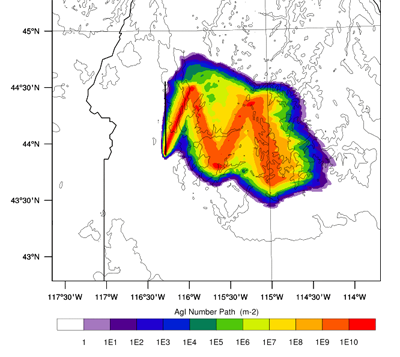 Silver iodide is released during the SNOWIE field project in such a way that it disperses downwind to the east, with its highest concentrations forming a zigzag pattern (shown in red). This allows scientists to fly a research aircraft from west to east through both seeded and unseeded regions and compare differences in ice crystal formation. (Image by Lulin Xue, ©UCAR. This image is freely available for media & nonprofit use.)

NCAR scientists are focusing much of their work on observations taken by a University of Wyoming King Air plane that is flying though plumes of silver iodide released by a seeding aircraft. The silver iodide disperses downwind in a zigzag pattern, enabling the King Air to intercept it multiple times. The scientists will compare the formation of ice crystals in regions of clouds that are seeded with those that are not.

The results can also be used to improve the NCAR-based Weather Research and Forecasting model (WRF), especially its simulation of cloud microphysics related to cloud seeding.

Although scientists think that cloud seeding and other types of weather modification can increase precipitation in certain circumstances, the effects are difficult to quantify.

"NCAR's role in these weather modification experiments is to provide an unbiased viewpoint," said NCAR scientist Sarah Tessendorf, a principal investigator on SNOWIE. "The project uses observations and computer models to determine what is happening during a cloud seeding program and whether it is effective as a water augmentation tool."

For more about the project, see the NSF news release.