From GOES-16 to the world

UCAR and NCAR to disseminate data from revolutionary new satellite

The first of a series of next-generation National Oceanic and Atmospheric Administration (NOAA) satellites, GOES-16 was launched in November and is expected to become fully operational late this year. It will immediately improve weather forecasts with its rapid, high-resolution views of hurricanes, thunderstorms, and other severe events, as well as provide a breakthrough lightning mapping system and more detailed monitoring of geomagnetic disturbances caused by the Sun.

"Scientists are rightfully excited because this is a revolutionary system," said Mohan Ramamurthy, director of UCAR's Unidata Program. "It's going to truly transform weather forecasting and research." 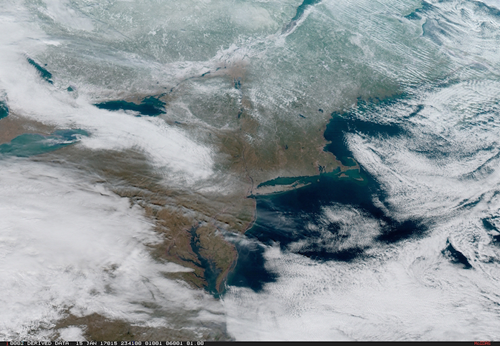 GOES-16 captured this view of the mid-Atlantic and New England states on Jan. 15. (Image by National Oceanic and Atmospheric Administration.)

Data from GOES-16 will be transmitted to a new downlink facility at the NCAR Mesa Lab. Unidata, which provides data, software tools, and support to enhance Earth system science education and research, will then make that data widely available.  As the only open-access and free source of GOES data in real time, Unidata's services have become indispensable to scientists as well as to operational forecasters in regions that lack their own downlink facilities, such as parts of Latin America.

More data than ever

For years, NCAR and UCAR have provided real-time data from a series of NOAA satellites known as GOES (Geostationary Operational Environmental Satellite). These satellites, which provide views of the Americas and adjoining ocean regions, are part of a global network of satellites whose observations are shared by forecasters and researchers worldwide.

But the advantages of GOES-16 also create new challenges. The satellite has three times as many spectral channels as its predecessors, each with four times more resolution. It can scan the entire Western Hemisphere every 15 minutes and simultaneously generate images of severe weather every 30-60 seconds. All this data will amount to about 1 terabyte per day, more than 100 times the amount of data produced by an existing GOES satellite. And even more data can be expected when NOAA launches additional advanced GOES satellites in coming years.

Thanks to a NOAA grant, UCAR and NCAR have installed a direct broadcast receiving station to receive the data, as well as the computers and electronics needed to process and transmit it. In addition to Unidata and EOL, NCAR's Research Applications Laboratory helps operate the downlink facilities for existing GOES satellites and relies on satellite data for the development of specialized forecasting products.

The volume of information means that Unidata will continue to move toward making data available in the cloud. It will store GOES-16 data for about 10 days and is in discussions with Amazon over long-term storage options.

EOL will customize GOES-16 observations for worldwide field projects, which advance understanding of Earth system science, including weather, climate, and air quality. Such projects deploy teams of scientists with aircraft, ships, ground-based instruments, and other tools. They rely on detailed forecasts and real-time updates about evolving atmospheric conditions.

"The data from GOES 16 will provide invaluable information for flight planning and decision making during field projects," said EOL director Vanda Grubišić. "This will enable scientists to gather additional observations, further advancing our understanding of the atmosphere and related aspects of the Earth system."

EOL will also include the GOES data in their field catalog, along with measurements from field campaigns and other observations. This catalog is widely used by scientists when analyzing results from past campaigns or planning new ones.

Other scientists say they are looking forward to the new capabilities that GOES-16 offers.

"The observations collected by the Geostationary Lightning Mapper on GOES-16 have the potential to help advance our understanding of hurricanes and their intensity changes," said Kristen Corboseiero, a professor in the Department of Atmospheric and Environmental Sciences at the University of Albany-SUNY. "Being able to access this data through Unidata will streamline and expedite our research."

In Costa Rica, agencies are planning to use the GOES-16 data from Unidata for weather forecasting and research. In addition, the data will help with monitoring water levels for hydropower to avoid possible power cuts during the dry season, as well as for observing volcanic ash that can affect aviation and farming near San Jose.

"Several institutions will be using the new GOES-16 data in ways that will help safeguard society from potential natural disasters as well as avoiding energy shortages," said Marcial Garbanzo Salas, an atmospheric sciences professor at the Universidad de Costa Rica (University of Costa Rica). "This is extremely important to us, and we're very pleased that Unidata will be making it available."