New research can help efforts to protect lives and property

WASHINGTON, D.C. — Scientists and fire experts are making landmark progress in developing new tools to improve the management and prediction of wildland fires, a panel of experts said at a congressional briefing today. The developments offer the potential of better protecting vulnerable residents and property from these extreme events, as well as reducing their costs.

"We're at a turning point where new technologies and advances in basic research are enabling us to tackle a major real-world problem," said UCAR President Antonio J. Busalacchi. "Federal and state agencies, firefighters, and scientists are all working together to develop a new generation of tools that will keep firefighters safer, reduce the costs of these massive conflagrations, and better safeguard lives and property." 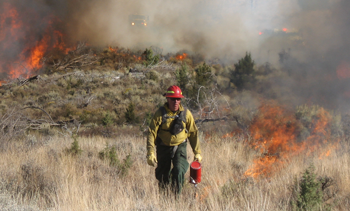 UCAR is a consortium of 110 universities that manages the National Center for Atmospheric Research (NCAR) on behalf of the National Science Foundation. NCAR's wildland fire research includes working with Colorado on an advanced prediction system.

The costs of forest, grass, and other types of wildland fires are increasing dramatically.

In 2016 alone, more than 67,000 wildfires consumed 5.5 million acres across the nation. The U.S. Forest Service spends more than $2.5 billion annually on fire management, an increase of more than 60 percent over the last decade. The total losses can run many times higher: Last year's Chimney Tops 2 fire in Gatlinburg, Tennessee, left 14 people dead and destroyed more than 2,400 structures at a cost of $500 million.

"The money spent by the federal government on suppressing the fires is only a fraction of the overall costs, such as the destruction of houses and other property," said Michael Gollner, assistant professor at the University of Maryland's Department of Fire Protection Engineering. "There are more large-scale fires than there used to be, and those are the most dangerous blazes that are particularly expensive and destructive."

Donald Falk, assistant professor of the University of Arizona's School of Natural Resources and the Environment, warned that decades of fire suppression coupled with drier and warmer temperatures in some regions will lead to longer fire seasons and more major fires.

"The problem is not going away," he said. "It's going to get bigger, and we're going to have to live with it without breaking the bank."

Wildland fires are extremely difficult to predict because they are influenced by local topography and vegetation, as well as by atmospheric conditions that, in turn, are affected by a blaze's heat and smoke. To better anticipate fire risk as well as predict a fire once it has started, scientists are harnessing new technologies. These include specialized satellite instruments and unmanned aerial vehicles to observe the blazes, as well as specialized computer models that incorporate weather-fire interactions, the density and condition of vegetation, landscape features such as elevation and topography, and the physics of fires.

The researchers are working with federal and state agencies, emergency managers, and firefighters to adapt the new capabilities for real-time decision support.

"Practitioners and scientists are bringing their expertise and knowledge to the table in order to create new evolutions of technology that will result in safer and more effective firefighting, enhance how we predict events and their potential impacts, and better plan for ways to prevent those wildfires we consider harmful," said Todd Richardson, state fire management officer of the Bureau of Land Management's Colorado office.

The event is the latest in a series of UCAR congressional briefings that draw on expertise from the university consortium and public-private partnerships to provide insights into critical topics in the Earth system sciences. Past briefings have focused on predicting space weather, aviation weather safety, the state of the Arctic, hurricane prediction, potential impacts of El Niño, and new advances in water forecasting.