Capturing a detailed portrait of wind

Project in Portugal will observe wind at unprecedented resolution

April 28, 2017 | For two autumns in the early 1980s, researchers covered an isolated, gently sloping hill in Scotland with dozens of scientific instruments to measure the behavior of wind as it blew up and over from the nearby coast.

More than three decades later, the resulting data set gathered on Askervein hill is still the benchmark for validating how well a computer model can simulate winds flowing over complex terrain. 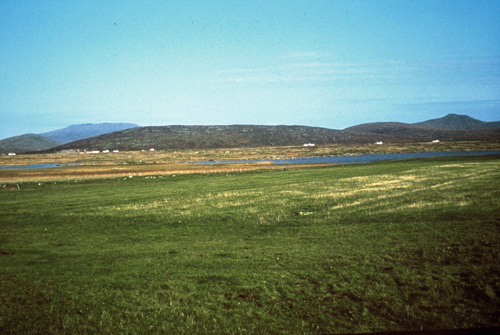 An image of the hill at Askervein. (Image courtesy of York University.)

But that's about to change.

The National Center for Atmospheric Research (NCAR) is partnering with colleagues in Europe and the United States on a field project in Portugal, called Perdigão, that will measure wind at an unprecedented resolution, both in time and space, as it moves through a more topographically diverse study area.

The experiment aims to help scientists improve their understanding of the basic physics of wind in the boundary layer (the lowest few hundred feet of the atmosphere). The completed data set will also serve as a new, more detailed, and more complex benchmark for testing the accuracy of the next generation of wind models.

Having accurate models of wind behavior in the boundary layer, where most weather occurs, is critical for a wide range of applications, from harvesting wind energy to predicting the spread of air pollution to piloting drones.

When scientists selected the Perdigão study area in central Portugal, they were looking for a place more complex than the single hill at Askervein but still relatively simple and easy to model.

Perdigão has two nearly parallel ridgelines that stand just a couple of kilometers apart, and the wind typically hits these ridges at a perpendicular angle, either from the southwest or the northeast. Unlike the Askervein hill, which was covered largely in heather and small shrubs, the landscape at Perdigão includes both forested and agricultural lands. Such differences in terrain and land cover can have important influences on local winds.

For the project, which begins its six-week "intensive operations period" on May 1, NCAR's Earth Observing Lab was tasked with outfitting 47 observational towers with instruments that will collect data on wind speed and direction, as well as temperature and humidity, from a variety of heights. The NCAR team is also in charge of networking all the instruments being used for the field campaign so they can talk to each other and to the researchers.

"This is the largest ground-based project we have ever taken on," said Alison Rockwell, who is managing the project for NCAR. "Networking that many towers with that many instruments — it's no easy feat."

A unique look at the wind's mysteries

The measurements taken by the instruments on the 47 towers outfitted by NCAR, along with those from five additional towers provided by project partners, will be supplemented by observations from a variety of other balloon-borne and ground-based instruments. Those include lidars, which can remotely measure the basic structure of the wind field using laser beams.

"One of the totally unique aspects of this experiment is the use of lidars to measure the main wind field," said NCAR scientist Steve Oncley, a contributing investigator on the project. "It frees up the instruments on the towers to measure the fine-scale turbulence close to the ground."

This ability to measure the wind at multiple scales simultaneously is another reason that data gathered during Perdigão is expected to be a vast improvement over the 1980s data set. While a similar number of towers were deployed at the Askervein hill, the instruments primarily measured wind at only one height, leaving much of the structure of fine-scale turbulence occurring close to ground a mystery.

One of the questions that Oncley hopes the experiment will answer in particular — which the 1980s data could not — is how wind behaves as it blows over the crest of the ridge: "When you have a strong wind, does it actually blow through the trees, down to the soil? Or does it just graze the tops of the trees as it flows over?"

The answer matters for understanding how much momentum is extracted from the wind, as well as how much heat and carbon dioxide are transferred between wind and landscape.

The Perdigão project is part of a larger effort to publish a digital New European Wind Atlas, supported by a European Union funding instrument called ERANET+. The Europeans are particularly interested in the detailed wind velocity data for use in wind energy development.

Data from a long-range wind scanner at the Perdigão site