Eclipse science, then and now

140 years of eclipse photography, and what scientists will watch for on Aug. 21

August 22, 2017 | The Eclipse Megamovie project is gathering still images and video captured by the public to compile a nonstop view of the eclipse as it crossed the continental United States. There is still time to submit your images: the movie will expand with new ones as they are submitted at the Eclipse Megamovie website.

August 15, 2017 | Scientists are eager to capture images of this year's eclipse — but that's nothing new. Researchers have been poring over images of total solar eclipses practically since there were images available to pore over. Thanks to the NCAR High Altitude Observatory (HAO), while you wait for Monday's Great American Eclipse of 2017, you can gaze at those same images, too. The solar scientists at HAO host an online gallery with 140 years of eclipse photos, starting in 1869. You can also see how modern processing techniques have unveiled previously hidden features of the Sun's corona within photos taken as early as 1901 and as recently as 2009. 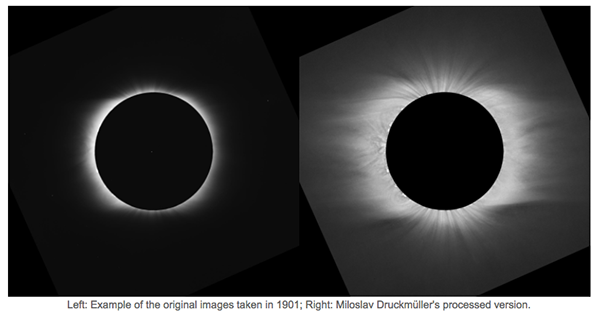 The archive of research-quality images grew out of efforts at NCAR to find and copy the earliest photographic plates available and record details of precisely where they were taken. The researchers then added to the collection with images of eclipses captured by special coronagraph telescopes, first using film cameras and more recently digital ones, during scientific expeditions all over the world.

On August 21, scientists from NCAR and other research organizations will be capturing as much data as they can from the total eclipse as it crosses the United States. In fact, to extend the maximum viewing time during totality beyond two minutes and 40 seconds, an NCAR research team will "chase" the eclipse with the NSF/NCAR HIAPER research jet, a modified Gulfstream V. Specialized instruments aboard the aircraft will take measurements of polarization and infrared heat in the solar corona for about four minutes.

NCAR's High Altitude Observatory has been studying the Sun's corona since 1940, and contributes to advances in specialized telescopes for that purpose, including the Newkirk Coronograph in the 1960s and improvements that have followed. Because a total solar eclipse is even better than a coronagraph, HAO scientists have studied eclipses around the world for decades as well. Learn more about eclipses and HAO's research into the mysteries of the Sun in this short animated video. (©UCAR. Watch on YouTube.)

After a short history of HAO, Mark Miesch (NCAR scientist) describes how citizen scientists can participate in the Eclipse Megamovie. He also talks about the Mobile Earth and Sun Observatory (MESO), which will be in Sutton, Nebraska for the eclipse. Eclipse eye safety and what to watch for round out this short video. (©UCAR. Watch on YouTube.)

More eclipse resources from the UCAR Center for Science Education>