BOULDER, Colo. — Tremendous amounts of soot, lofted into the air from global wildfires following a massive asteroid strike 66 million years ago, would have plunged Earth into darkness for nearly two years, new research finds. This would have shut down photosynthesis, drastically cooled the planet, and contributed to the mass extinction that marked the end of the age of dinosaurs.

These new details about how the climate could have dramatically changed following the impact of a 10-kilometer-wide asteroid will be published Aug. 21 in the Proceedings of the National Academy of Sciences. The study, led by the National Center for Atmospheric Research (NCAR) with support from NASA and the University of Colorado Boulder, used a world-class computer model to paint a rich picture of how Earth’s conditions might have looked at the end of the Cretaceous Period, information that paleobiologists may be able to use to better understand why some species died, especially in the oceans, while others survived.

Scientists estimate that more than three-quarters of all species on Earth, including all non-avian dinosaurs, disappeared at the boundary of the Cretaceous-Paleogene periods, an event known as the K-Pg extinction. Evidence shows that the extinction occurred at the same time that a large asteroid hit Earth in what is now the Yucatán Peninsula. The collision would have triggered earthquakes, tsunamis, and even volcanic eruptions.

Scientists also calculate that the force of the impact would have launched vaporized rock high above Earth's surface, where it would have condensed into small particles known as spherules. As the spherules fell back to Earth, they would have been heated by friction to temperatures high enough to spark global fires and broil Earth's surface. A thin layer of spherules can be found worldwide in the geologic record.

"The extinction of many of the large animals on land could have been caused by the immediate aftermath of the impact, but animals that lived in the oceans or those that could burrow underground or slip underwater temporarily could have survived," said NCAR scientist Charles Bardeen, who led the study. "Our study picks up the story after the initial effects — after the earthquakes and the tsunamis and the broiling. We wanted to look at the long-term consequences of the amount of soot we think was created and what those consequences might have meant for the animals that were left."

Other study co-authors are Rolando Garcia and Andrew Conley, both NCAR scientists, and Owen “Brian” Toon, a researcher at the University of Colorado Boulder. 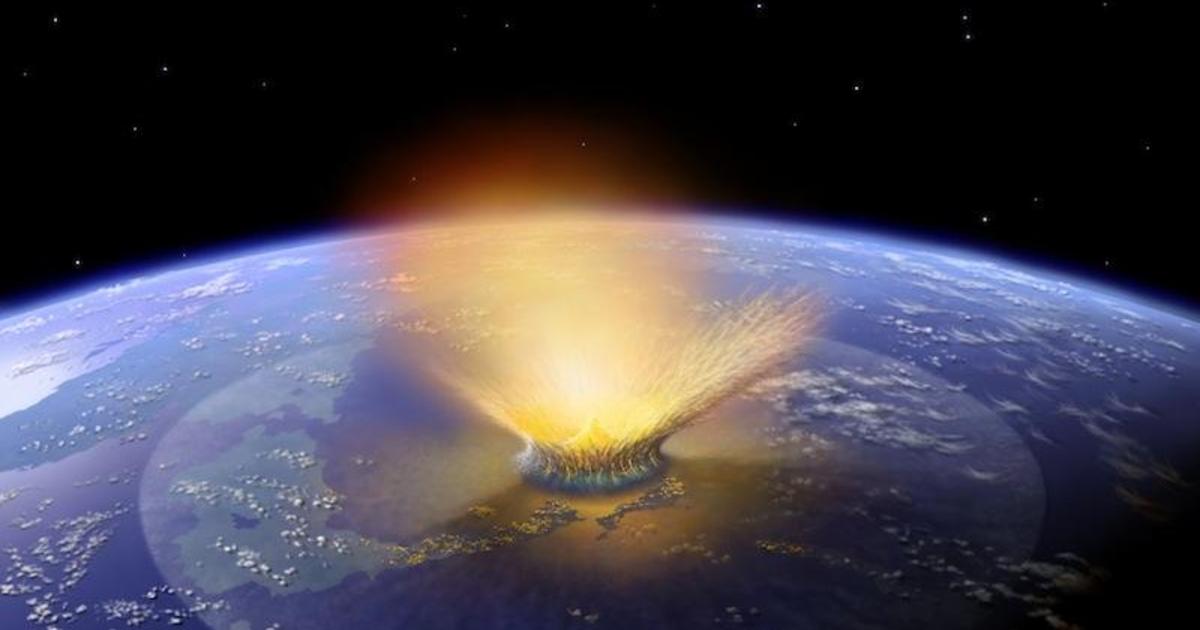 An illustration of an asteroid impacting Earth. (Image courtesy NASA.)

A world without photosynthesis

In past studies, researchers have estimated the amount of soot that might have been produced by global wildfires by measuring soot deposits still preserved in the geologic record. For the new study, Bardeen and his colleagues used the NCAR-based Community Earth System Model (CESM) to simulate the effect of the soot on global climate going forward. They used the most recent estimates of the amount of fine soot found in the layer of rock left after the impact (15,000 million tons), as well as larger and smaller amounts, to quantify the climate's sensitivity to more or less extensive fires.

In the simulations, soot heated by the Sun was lofted higher and higher into the atmosphere, eventually forming a global barrier that blocked the vast majority of sunlight from reaching Earth's surface. “At first it would have been about as dark as a moonlit night," Toon said.

While the skies would have gradually brightened, photosynthesis would have been impossible for more than a year and a half, according to the simulations. Because many of the plants on land would have already been incinerated in the fires, the darkness would likely have had its greatest impact on phytoplankton, which underpin the ocean food chain. The loss of these tiny organisms would have had a ripple effect through the ocean, eventually devastating many species of marine life.

The research team also found that photosynthesis would have been temporarily blocked even at much lower levels of soot. For example, in a simulation using only 5,000 million tons of soot — about a third of the best estimate from measurements — photosynthesis would still have been impossible for an entire year.

While Earth's surface cooled in the study scenarios, the atmosphere higher up in the stratosphere actually became much warmer as the soot absorbed light from the Sun. The warmer temperatures caused ozone destruction and allowed for large quantities of water vapor to be stored in the upper atmosphere. The water vapor then chemically reacted in the stratosphere to produce hydrogen compounds that led to further ozone destruction. The resulting ozone loss would have allowed damaging doses of ultraviolet light to reach Earth's surface after the soot cleared.

The large reservoir of water in the upper atmosphere formed in the simulations also caused the layer of sunlight-blocking soot to be removed abruptly after lingering for years, a finding that surprised the research team. As the soot began to settle out of the stratosphere, the air began to cool. This cooling, in turn, caused water vapor to condense into ice particles, which washed even more soot out of the atmosphere. As a result of this feedback loop — cooling causing precipitation that caused more cooling — the thinning soot layer disappeared in just a few months.

While the scientists think the new study gives a robust picture of how large injections of soot into the atmosphere can affect the climate, they also caution that the study has limitations.

For example, the simulations were run in a model of modern-day Earth, not a model representing what Earth looked like during the Cretaceous Period, when the continents were in slightly different locations. The atmosphere 66 million years ago also contained somewhat different concentrations of gases, including higher levels of carbon dioxide.

Additionally, the simulations did not try to account for volcanic eruptions or sulfur released from the Earth's crust at the site of the asteroid impact, which would have resulted in an increase in light-reflecting sulfate aerosols in the atmosphere.

"An asteroid collision is a very large perturbation — not something you would normally see when modeling future climate scenarios," Bardeen said. "So the model was not designed to handle this and, as we went along, we had to adjust the model so it could handle some of the event's impacts, such as warming of the stratosphere by over 200 degrees Celsius."

These improvements to WACCM could be useful for other types of studies, including modeling a "nuclear winter" scenario. Like global wildfires millions of years ago, the explosion of nuclear weapons could also inject large amounts of soot into the atmosphere, which could lead to a temporary global cooling.

"The amount of soot created by nuclear warfare would be much less than we saw during the K-Pg extinction," Bardeen said. "But the soot would still alter the climate in similar ways, cooling the surface and heating the upper atmosphere, with potentially devastating effects."