December 4, 2017 | The solar seasons — which change every six to 18 months from "bursty" to quiet, and vice versa — have been realistically simulated for the first time in a computer model of the Sun's shear layer beneath the turbulent outer shell, an advance that promises the ability to predict these seasonal fluctuations nearly a year in advance.

Solar seasons, discovered just a few years ago, are periods of greater or lesser solar activity. In what scientists have dubbed the bursty season, sunspots and the flares that can accompany them are more common. In the quiet season they are fewer and farther between.

These seasons are superimposed on the approximately 11-year solar cycle, when the Sun transitions from solar minimum (fewer sunspots) to solar maximum (more sunspots) and back again. The seasons serve to amplify — or dampen — the Sun's background state.

Now, scientists at the National Center for Atmospheric Research have simulated these seasons in a sophisticated solar model, discovering for the first time the physical mechanisms at their root. The new research, led by NCAR scientist Mausumi Dikpati, was published earlier this month in the Nature journal Scientific Reports.

Already, Dikpati and colleagues are working on using the model — fed with observations taken of magnetic fields on the front and back sides of the Sun — to make predictions of seasonal changes up to a year in advance. Such predictions are valuable because the major solar flares and coronal mass ejections that are more likely to occur during the bursty season can cause havoc on Earth, scrambling radio communications, damaging satellites, disabling power grids, and imperiling astronauts.

"Right now, space weather forecasters issue at most a one-day warning — sometimes just a few hours — that a coronal mass ejection might cause a damaging geomagnetic storm here on Earth," Dikpati said. "Having a model that captures the physical mechanisms behind the Sun's seasons can better equip scientists to forecast these storms." 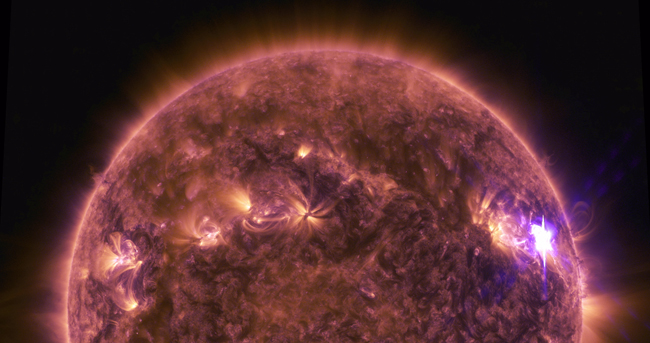 NASA's Solar Dynamics Observatory captured a solar flare exploding from the face of the Sun on April 17, 2016. (Image courtesy NASA.)

In the new study, the scientists find that the solar seasons owe their origin to the interaction between two phenomena tied to the Sun's magnetic fields: Rossby waves and differential rotation.

Rossby waves, only recently discovered in observations of the Sun, are large-scale planetary waves that can also be found in Earth's atmosphere and oceans.

Differential rotation refers to the fact that the Sun's equator rotates more quickly than its poles. This difference allows the solar magnetic field to twist and tangle, sometimes combining into ropes of magnetic field lines that can burst from the Sun's surface.

Dikpati and her colleagues found that when the Rossby waves are tilted in a particular direction, they can feed on energy from the Sun's differential rotation. Once the Rossby waves have extracted all the available energy, the waves begin to straighten and feed energy back to the differential rotation, eventually tilting to the opposite direction. Then the cycle repeats.

This back-and-forth exchange of energy marks the changing of the solar seasons. The Sun's bursty season coincides with the period when Rossby waves have their maximum energy. During these times, the Rossby waves deform the surface of the Sun’s shear layer into bulges and depressions. When the bulges coincide with a rope of magnetic field lines, they provide an opportunity for those magnetic field lines to more easily break through the Sun's surface, often creating flares and coronal mass ejections, including very strong ones that affect Earth.

Bursty seasons — no matter whether they occur during a solar cycle that is stronger or weaker than normal — contain the most dangerous space weather events. For example, one of the strongest solar storms ever observed was generated in July 2012 during the current solar cycle, which is considered weak. The solar storm narrowly missed hitting Earth. If it had, solar scientists say that the impact on our modern, technology-driven society could have been devastating.

"The Sun is remarkably complex, and this modeling effort has given us some insight into the structures of the seemingly chaotic magnetic field," Dikpati said. "More complex modeling, with assimilation of more observations, will allow us to continue to work on improving prediction of dangerous solar storms."

The research was funded by the National Science Foundation, NCAR's sponsor. The model simulations for the study were run on both the Yellowstone and Cheyenne supercomputers at the NCAR-Wyoming Supercomputing Center. Other co-authors of the study are Paul Cally (Monash University Clayton in Australia), Scott McIntosh (NCAR), and Eyal Heifetz (Tel Aviv University in Israel).

Title: The Origin of the "Seasons" in Space Weather