The life of a legendary meteorologist

5 March 2010  •  Atmospheric scientists around the world are mourning the loss of Joanne Simpson. The 87-year-old researcher, who upended stereotypes and made landmark contributions to meteorology, died on 4 March in Washington, DC. "We have a lost a great scientist and a true friend," said retired radar meteorologist David Atlas, a longtime colleague. 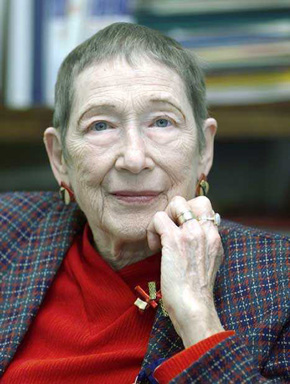 As noted in her NASA biography, Simpson overcame a difficult childhood and persistent gender-based barriers on her way to remarkable achievements. The first woman to earn a doctorate in meteorology (at the University of Chicago), Simpson clarified the role of "hot towers"-narrow, intense updrafts within thunderstorms-in global circulation and hurricane dynamics. She also led the scientific planning for the Tropical Rainfall Measuring Mission (TRMM), which has gathered crucial radar data by satellite above the tropics and subtropics.

Along with serving as president of the American Meteorological Society in 1989, Simpson received the AMS's highest honor, the Carl-Gustaf Rossby Research Medal, in 1983, and was granted membership to the National Academy of Engineering in 1988.

Simpson was candid about the sacrifices her career entailed. In a 1973 essay for the Annals of the New York Academy of Sciences, she wrote, "I think the difficulties faced by a woman trying to combine top-level achievement with successful marriage and motherhood are close to prohibitive, although I have attempted to build on my experience to advise young women determined to seek those goals." Later on, as the situtation improved both for Joanne and for women in general, she felt more optimistic, according to another longtime colleague, Margaret "Peggy" LeMone (NCAR).

"Joanne in her later years was delighted with her family situation," says LeMone. "She was very fortunate to have the support of a wonderful husband, as well as a satisfying research career and more recognition than obstacles at that point."

There was no doubt about Simpson's dedication to science. In her 1989 interview for the AMS-UCAR oral history project, Simpson said, "I don't like the idea of when I won't be a meteorologist anymore. It's just inconceivable to me."

Simpson is survived by her husband of more than four decades, Robert Simpson, himself an eminent hurricane researcher, as well as three children and six grandchildren. Friends and family are organizing a memorial service in Washington, D.C., scheduled for March 23, which would have been Simpson's 88th birthday. Further details will be posted on this page as they become available.

Below are reflections on Simpson and her legacy from UCAR and NCAR leaders.

The many phases of Joanne Simpson's career include groundbreaking research on "hot towers" at Woods Hole Oceanographic Institution in the 1950s (top); a full professorship at the University of California, Los Angeles, in the 1960s (center), when she developed the first computer model of clouds; and directorship of the Florida Area Cumulus Experiment in 1973 (bottom), one of several field projects in which Simpson played a lead role. (Top and center photos courtesy Joanne Simpson and the Schlesinger Library; bottom photo courtesy Fritz Hoelzl, NOAA.)

Whoever met Joanne, even briefly, always remembered her. Her energy, enthusiasm, intelligence, and support for the people she worked with was remarkable. She was a superb 24-7 scientist, but one who always enjoyed informal social interactions "after science" with her many friends and colleagues. Generous, kind, sparkling, caring, inspirational, vivacious, determined, unpretentious, forgiving, and loving, Joanne was a role model and mentor for all young and not-so-young scientists and humanists. The hot towers in the tropics are shedding tears of love today.

Joanne was an inspiration to women in meteorology for over a half century. I learned from seeing her on television in the 1950s that it was actually possible for a girl to go into meteorology. When we first met in the 1970s, I felt I was seeing a long-lost friend. I learned then, working with her on a study of women in meteorology, that her early years were a struggle, against not only stereotypes, but against severe institutional obstacles like anti-nepotism rules. But Joanne wasn't going to give up. She overcame those obstacles and helped those of us coming after her not only by her example and advice, but also by helping to remove many of those obstacles. And, just as importantly, she shared the joy of discovery and the joy of living with many of us, all while doing pioneering work.

When I reviewed Joanne's early work, I marveled at how much information she could glean—from much more primitive aircraft data than I ever worked with—about the energetics of the tropical boundary layer and the behavior of hurricanes and clouds. But this was only the beginning of a distinguished career, during which she pioneered in the use of computer models to study clouds and then in the use of satellite information to study tropical precipitation. To paraphrase Howard Bluestein, she was not only a pioneer as a woman scientist, she was a pioneer as a scientist, period.

I remember many conversations that I had with Joanne over the years, including providing encouragement to me as a young scientist at the University of Chicago and the University of California, Los Angeles. She was always game for a good and lively scientific debate and reliving past experiences that would thoroughly engage any audience. It gives me a great sense of pride that her photo is hanging on our wall outside the NCAR Damon Room. I will greatly miss her, but her scientific accomplishments and life story will live on and inspire future generations of researchers.

Joanne was one of the giants of tropical meteorology, a remarkable advocate for women in science, a great mentor to many young scientists, and a dear friend. Her professional record stands as an outstanding testament to a lifetime devoted to all aspects of her science: field observation, theoretical insight, and leadership of major projects such as the TRMM satellite. But this was more than equaled by her contributions as a scientific mentor, contributions which live on in her protégés. I personally owe Joanne so much for her advice and mentorship throughout my career.

Joanne was first and foremost an explorer, and this occupied her private life. Whether it was walking in the Himalayas, journeying to the Antarctic, or sailing in remote locations, she was there. There was nothing that she did not tackle full on, and it was very rare that she did not succeed. Joanne was indeed a great scientist, but it is Joanne the person that I remember with fondness.

Correction (7 March 2010): The article has been revised to indicate the correct age for Joanne Simpson, which was 87, and to include her children and grandchildren.