Have it your way: New hydrologic model lets the user decide

June 17, 2015 | Water falls from the sky, runs across the earth, funnels into drainages, and fills rivers.

It seems simple. But total precipitation does not equal total streamflow. Along the way, some of the water gets sucked up by plants, absorbed by the soil, or evaporated into the air. A complex array of factors—from wind speed to geology—influences how much precipitation converts into streamflow and at what speed.

Hydrologic models for predicting streamflow each capture these variables in different ways. This can lead to large disparities in their results and, therefore, large headaches for water managers who depend on the forecasts to plan for the future.

Scientists at the National Center for Atmospheric Research and their collaborators have now developed a way to bring these diverse modeling approaches together, dig into their differences, and ultimately paint a fuller picture of what streamflow may look like in the future, especially in the face of a changing climate.

Led by NCAR scientist Martyn Clark, the research team has developed the Structure for Unifying Multiple Modeling Alternatives. SUMMA allows users to customize the model by making individual decisions about how to treat a vast range of variables, a capability that allows SUMMA to both mimic existing models and create something entirely new. 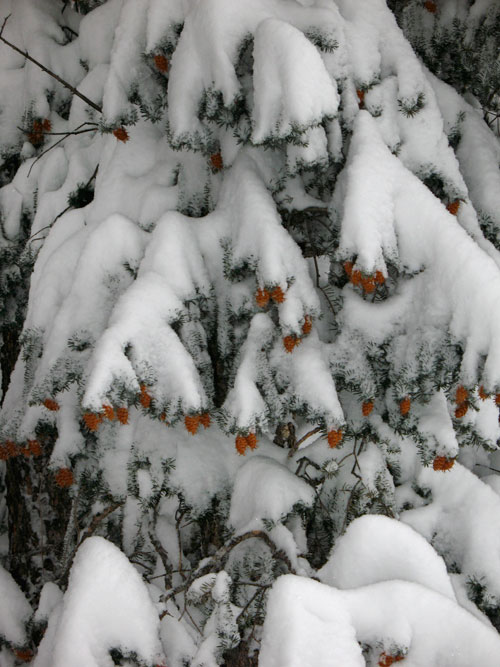 Hydrologic models vary in the way they represent physical processes. For example, they can differ in their assumptions about the temperature at which snow is most prone to stick to the tree canopy. SUMMA allows users to customize how the model treats a range of variables to uncover the impact of any single assumption. (©UCAR. Photo by Carlye Calvin. This image is freely available for media & nonprofit use.)

Flipping the switch on model comparison

Because hydrologic models can vary so drastically in their approaches, water managers sometimes use several different models and then compare the results. When the future scenarios differ significantly, however, it can be difficult to pinpoint the reason. Is it due, for example, to the way the model divides the landscape into smaller units? Or maybe how it connects those units? Something else?

"There can be hundreds of differences between the models," Clark said. "You can make broad conclusions, but you need a more controlled and systematic approach to model evaluation to understand why the differences occurred."

SUMMA, which Clark and his collaborators describe in detail in a pair of papers recently published in Water Resources Research, tackles this problem by allowing researchers to drill down into the construction of existing models.

By essentially flipping switches within SUMMA, a user can recreate the parameters hard-wired into existing hydrologic models. Then, by changing one setting at a time, the user can begin to untangle what actually accounts for differences in the modeling results.

SUMMA will let a user uncover the impact of a single assumption—such as when snow sticks to trees or how water flows through soil—on predictions produced by multiple models, even when those models have dozens of other differences.

"The idea is to be more explicit about the decisions we're making when building models," Clark said. "The result can be more accurate and detailed representations of the watershed."

SUMMA is also a tool that can help scientists grapple with some of the challenges of assessing the impact of climate change on water supplies.

Water resource managers have begun to incorporate climate change into their long-term planning. In order to make good decisions, however, they need to know how confident to be in any one model's results.

Uncertainty can be introduced into projections of future impacts in multiple ways, including when the results from global climate models are downscaled to a single river basin. Uncertainty also trickles in when a hydrologic model doesn't do a good job of representing one particular process that's important in one particular watershed.

Because SUMMA can be easily modified, users can produce an ensemble of future streamflow predictions that characterize how great the uncertainty is—or isn't—by describing an entire range of possible scenarios. Water resource managers can be more confident in the results where the scenarios tend to look the same. Where the scenarios differ, they may need to plan for a wider spectrum of potential future conditions.

"We want to allow for a fuller characterization of model uncertainty so that we can plan for water security," Clark said. "And SUMMA is a way to bring this together." 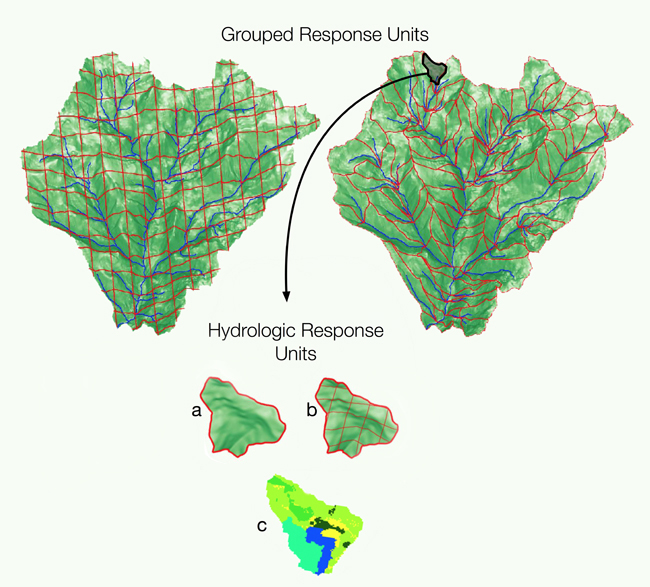 Users of the SUMMA hydrologic model can make myriad choices about how the model functions, such as deciding how to represent the variability across a watershed. For example, users can decide first whether to break a river basin up into a grid (top left), into sub-catchments (top right), or into any other shape. The runoff computed for each of these individual divisions, known as Grouped Response Units is added to the total river flow.

But SUMMA also allows users to further customize each GRU by dividing them into Hydrologic Response Units, which characterize how vegetation, geology, and other variables affect the way water moves through the soil column. Users have the option of treating each GRU as a single HRU (a) or of dividing each GRU into a grid, (b) with each cell representing a different HRU.

Finally, users can exercise even more control over the way the model represents water movement within a GRU by customizing the shape of each HRU so that it reflects as accurately as possible the actual conditions on the ground (c).