July 22, 2015 | A well-knit network of weather stations is critical to making accurate regional forecasts and understanding the long-term impacts of a changing climate. But in parts of the developing world, working weather stations are few and far between.

Technologists Kelly Sponberg and Martin Steinson think the latter is a possibility for filling in the often substantial distances between high-tech weather stations in places like Africa, where the density of stations is eight times lower than recommended by the World Meteorological Organization. Sponberg and Steinson develop new tools for the meteorology community through the Joint Office of Science Support (JOSS), a program of the University Corporation for Atmospheric Research. 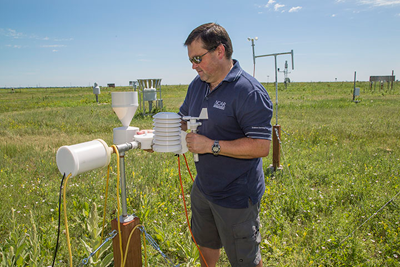 Paul Kucera, an NCAR scientist, holds a wind direction gauge while checking connections and cables for a prototype 3D-printed weather station at a test site outside Boulder. The vertical, vented cylinder at right is a radiation shield containing temperature, humidity, pressure, and altitude sensors. The funnel on the left contains a specially designed precipitation gauge. The horizontal cylinder protruding out the back contains a single-board computer. (©UCAR. Photo by Carlye Calvin. This image is freely available for media & nonprofit use.)

In countries where resources are tight, it's been a long-term challenge to come up with the funds to pay for weather-observing equipment. Even when money is provided, sometimes by international organizations, it's not uncommon for a broken piece of equipment to stay offline since local technicians rarely have the training or specialized parts needed to come up with a fix.

JOSS has been focusing on this problem for years. One past solution involved installing high-end consumer weather stations, each costing around $1,000. These relatively inexpensive installations were good enough to provide some basic observations, but they weren't customizable. When they started to fail, parts couldn't be replaced because the manufacturers had long since quit making them.

So Sponberg and Steinson turned their attention to building a weather station that is affordable, made to order, and easy to fix.

Print it, use it, break it—print it again

The result is the Micro-Manufacturing and Assembly (MMA) project. The idea is to print the pieces of the weather station—which would vary depending on what the national meteorological service in a particular country wants—plug in off-the-shelf sensors, and use Raspberry Pi, a tiny low-cost computer originally developed by a nonprofit foundation to teach basic coding, as the station's brains.

The price of parts and materials is about $200 per weather station. Funding for the project comes from the U.S. Agency for International Development.

As pieces break, or a country's meteorological service decides it wants to tweak or expand the station's capabilities, new parts can be printed and sensors can be easily upgraded.

"This is an open source project," Sponberg said. "You can design the station and build it yourself, and, after a few years, if you decide you want the anemometer to work better or in a different way, for example, you have the tools to just print that yourself."

For the last year, a prototype 3D-printed station has been put through its paces—enduring rain, snow, wind, and the sometimes unrelenting Colorado sunshine—at UCAR's Marshall field site south of Boulder. So far, the materials seem to be holding up well.

Once the prototype has proven both sturdy and reliable, the plan is to begin deploying stations in the field, perhaps late this year.

Determining where stations are installed, however, will be as important as how well the stations work. For a project to be successful, the local community has to support it, Sponberg and Steinson said. Getting buy-in from the local community requires understanding local needs and how better weather observations—which can ultimately create better local forecasts—can help meet those needs, they said. Involving the community in the design process is also essential.

The team is focusing on Zambia for the initial location because they've worked there in the past and can tap into existing relationships to make sure the community is involved.

"The community needs to value the weather observations and the weather station," Sponberg said. "The observation network will only survive if there's a human network behind it." 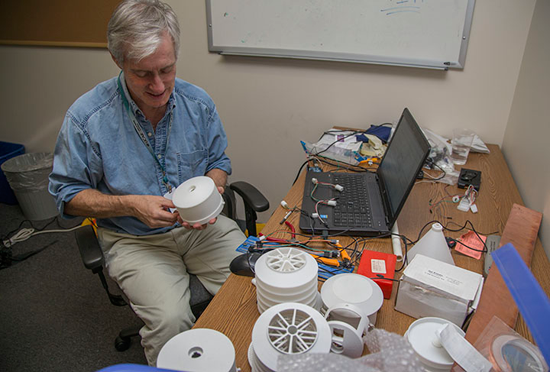 UCAR's Martin Steinson examines a rain gauge, one of the key weather station components produced by 3D printing. (©UCAR. Photo by Carlye Calvin. This image is freely available for media & nonprofit use.)