January 26, 2016 | Weather forecasts have become increasingly more reliable thanks to improvements over the past several decades in computer modeling and observational equipment. However, when it comes to severe weather, that reliability typically begins to deteriorate beyond a two-day forecast.

To provide an accurate severe weather outlook three or more days in advance, forecasters need to capture the fine-scale behavior of clouds, vertical wind shear and other local processes, as well as the global atmospheric conditions surrounding the local region of interest.

Regional models examine fine-scale conditions at high resolution, but they have a difficult time with accuracy between the area of interest and the surrounding region. Errors in these so-called boundary regions can distort the results for the target area. Simulating the entire globe in high resolution would help, but that takes an exorbitant amount of computing time. 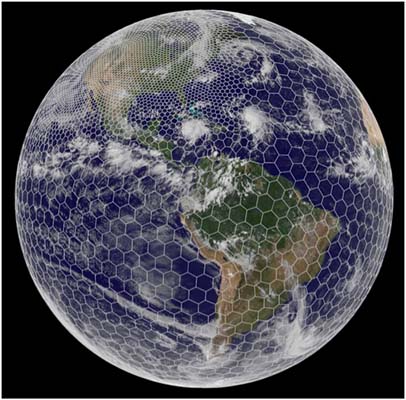 MPAS's variable mesh enables smooth transitions from higher resolution (over North America in this example) to coarser resolution over the rest of the globe. (@UCAR. This image is freely available for media & nonprofit use.)

A global software platform called Model for Prediction Across Scales, or MPAS, aims at resolving those issues. It offers a new way of simulating the atmosphere while providing scientists with more flexibility when focusing on regional conditions. Its development comes at a time when the U.S. National Weather Service wants to increase the lead time and accuracy of forecasts of severe storms, including hurricanes, tornadoes and flash floods, so communities can be better prepared.

Unlike traditional three-dimensional models that calculate atmospheric conditions at multiple points within a block-shaped grid, MPAS uses a hexagonal mesh resembling a soccer ball or honeycomb that can be stretched wide or compressed for higher resolution as needed. "The mesh allows for a smooth transition between areas of coarse and fine resolution, with the goal of eliminating boundary distortions," said NCAR Senior Scientist William Skamarock, one of the developers of MPAS.

Look globally as well as locally

Vertical wind shear, or the change of winds at height, is a critical factor in determining thunderstorm severity. MPAS is able to simulate vertical wind shear at higher resolutions over local areas of interest, as well as cloud behavior and other processes vital to severe weather prediction.

Ocean currents and many other global factors also can alter weather quickly. Global forecasts produced by the National Oceanic and Atmospheric Administration (NOAA) go out to 16 days; for tropical cyclones and hurricanes it's five days, but accuracy declines for the extended forecasts.

"For some weather events, such as tropical cyclones, what's going on at the other side of the globe can influence the forecast for your region," Skamarock said. So forecasters need to portray the global environment surrounding a region that's under threat.

Jointly developed at NCAR and the Los Alamos National Laboratory in New Mexico, MPAS is being groomed especially to improve regional and global weather forecasts, climate modeling, and atmospheric chemistry research, such as regional air-quality forecasts.

Last July, MPAS was selected by NOAA as one of the finalists to become the National Weather Service’s next-generation global weather model. The decision is expected later this year.

"The fact that MPAS is a finalist is an expression of confidence in the model’s capabilities," Skamarock said.

In tests, MPAS has performed well in predicting springtime thunderstorms and other severe weather over the Great Plains. It also has produced realistic simulations of certain tropical cyclones, including Hurricane Sandy of 2012. However, along with other U.S. models, it missed on 2015's Hurricane Joaquin.

NOAA has reported that MPAS provided realistic, fine-scale detail for Hurricane Sandy in 2012 and for 2013 springtime weather over the continental U.S., including the tornado that struck Moore, Okla.  "MPAS also did reasonably well in providing five-day forecasts during a NOAA hazardous weather experiment last May," Skamarock said. 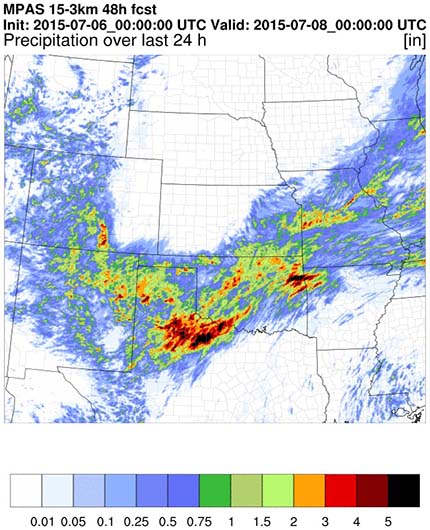 MPAS's 48-hour forecast for July 8, 2015, accurately predicted heavy rain for northern Texas and much of Oklahoma. Abilene wound up getting 8.25 inches, its wettest day since record keeping started in 1885. (@UCAR. This image is freely available for media & nonprofit use.)

In spring 2015, MPAS also won high marks for the accuracy of its three-day forecasts that helped guide research aircraft missions during a major field campaign to study nighttime thunderstorms on the Great Plains, called PECAN (Plains Elevated Convection at Night).

NCAR Project Scientist Stan Trier, who worked as a forecaster on the PECAN campaign, said the MPAS forecasts were usually the first he would look at for planning purposes because MPAS was the only model that had the resolution to indicate possible storm structures beyond 48 hours. Then, as the time to make decisions on overnight field operations approached, he would update these earlier forecasts with new information produced by shorter-range, high-resolution models.

"There were multiple situations where MPAS did quite well at these longer time ranges," Trier said. "Forecasts with two to three days of lead time are less accurate than one-day forecasts. This is expected. But overall, I would definitely say that MPAS was a useful part of the PECAN forecasting process."

Most recently, MPAS has been tested in Antarctica and during the 2015 tropical cyclone season in the Atlantic and Pacific oceans. It also is being used as a component within the NCAR-based Community Earth System Model for long-term climate prediction, and has been tested at the Taiwan Typhoon and Flood Research Institute to predict severe weather events in that country.

Even if MPAS emerges as the National Weather Service’s next-generation weather model, there will still be a role for the Weather Research and Forecasting platform hosted by NCAR. WRF, an open source model used widely worldwide, is especially adept for local and regional weather predictions in the mid-latitudes. And, while MPAS's variable-mesh design conserves computing requirements, as a global model, it still uses more computing resources than WRF.

"With MPAS, we want to predict severe thunderstorms with a mesh spacing of a few kilometers," Skamarock said. "That takes a lot of computer power."