Widespread loss of ocean oxygen to become noticeable in 2030s

BOULDER — A reduction in the amount of oxygen dissolved in the oceans due to climate change is already discernible in some parts of the world and should be evident across large regions of the oceans between 2030 and 2040, according to a new study led by the National Center for Atmospheric Research (NCAR).

Scientists know that a warming climate can be expected to gradually sap the ocean of oxygen, leaving fish, crabs, squid, sea stars, and other marine life struggling to breathe. But it's been difficult to determine whether this anticipated oxygen drain is already having a noticeable impact.

"Loss of oxygen in the ocean is one of the serious side effects of a warming atmosphere, and a major threat to marine life," said NCAR scientist Matthew Long, lead author of the study. “Since oxygen concentrations in the ocean naturally vary depending on variations in winds and temperature at the surface, it's been challenging to attribute any deoxygenation to climate change. This new study tells us when we can expect the impact from climate change to overwhelm the natural variability."

The study is published in the journal Global Biogeochemical Cycles, a publication of the American Geophysical Union. The research was funded by the National Science Foundation, NCAR's sponsor. 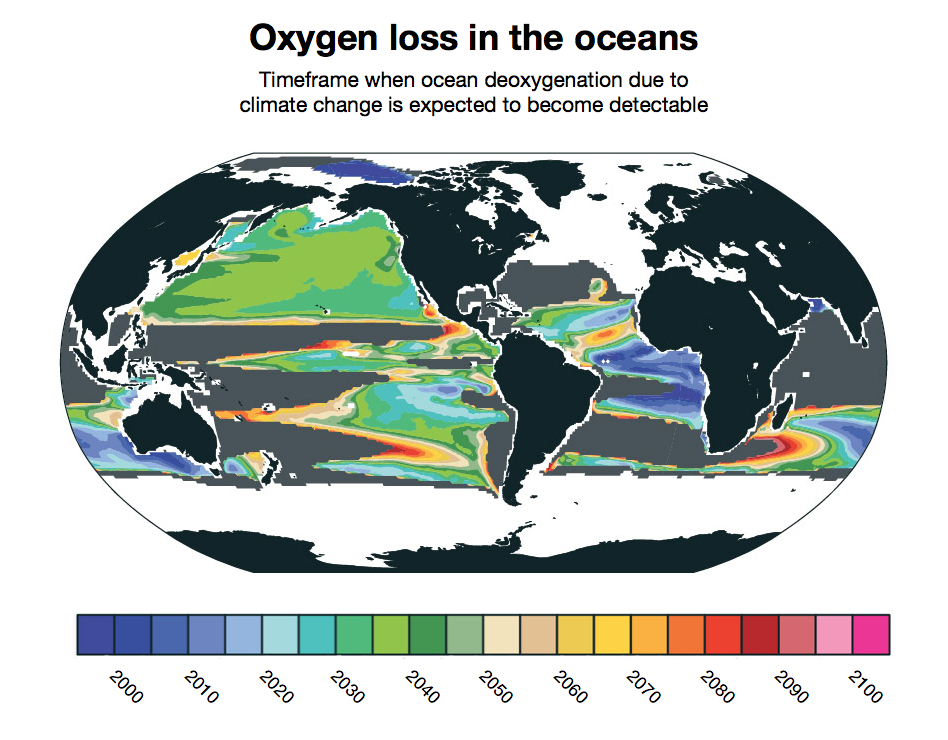 Deoxgenation due to climate change is already detectable in some parts of the ocean. New research from NCAR finds that it will likely become widespread between 2030 and 2040. Other parts of the ocean, shown in gray, will not have detectable loss of oxygen due to climate change even by 2100. (Image courtesy Matthew Long, NCAR. This image is freely available for media & nonprofit use.)

Cutting through the natural variability

The entire ocean—from the depths to the shallows—gets its oxygen supply from the surface, either directly from the atmosphere or from phytoplankton, which release oxygen into the water through photosynthesis.

Warming surface waters, however, absorb less oxygen. And in a double whammy, the oxygen that is absorbed has a more difficult time traveling deeper into the ocean. That's because as water heats up, it expands, becoming lighter than the water below it and less likely to sink.

Thanks to natural warming and cooling, oxygen concentrations at the sea surface are constantly changing—and those changes can linger for years or even decades deeper in the ocean.

For example, an exceptionally cold winter in the North Pacific would allow the ocean surface to soak up a large amount of oxygen. Thanks to the natural circulation pattern, that oxygen would then be carried deeper into the ocean interior, where it might still be detectable years later as it travels along its flow path. On the flip side, unusually hot weather could lead to natural "dead zones" in the ocean, where fish and other marine life cannot survive.

To cut through this natural variability and investigate the impact of climate change, the research team—including Curtis Deutsch of the University of Washington and Taka Ito of Georgia Tech—relied on the NCAR-based Community Earth System Model, which is funded by the National Science Foundation and the U.S. Department of Energy.

The scientists used output from a project that ran the model more than two dozen times for the years 1920 to 2100 on the Yellowstone supercomputer, which is operated by NCAR. Each individual run was started with miniscule variations in air temperature. As the model runs progressed, those tiny differences grew and expanded, producing a set of climate simulations useful for studying questions about variability and change.

Using the simulations to study dissolved oxygen gave the researchers guidance on how much concentrations may have varied naturally in the past. With this information, they could determine when ocean deoxygenation due to climate change is likely to become more severe than at any point in the modeled historic range.

Picking out a global pattern

Using the same model dataset, the scientists created maps of oxygen levels in the ocean, showing which waters were oxygen-rich at the same time that others were oxygen-poor. They found they could distinguish between oxygenation patterns caused by natural weather phenomena and the pattern caused by climate change.

The pattern caused by climate change also became evident in the model runs around 2030, adding confidence to the conclusion that widespread deoxygenation due to climate change will become detectable around that time.

The maps could also be useful resources for deciding where to place instruments to monitor ocean oxygen levels in the future to get the best picture of climate change impacts. Currently ocean oxygen measurements are relatively sparse.

"We need comprehensive and sustained observations of what's going on in the ocean to compare with what we're learning from our models and to understand the full impact of a changing climate," Long said.