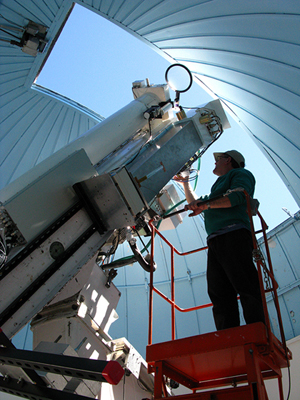 Magnetic fields are difficult to assess within the thin, superheated coronal environment, but CoMP’s highly sensitive infrared sensors have done the job well. The instrument’s 20-centimeter (8-inch) telescope tracks magnetic activity around the entire edge of the Sun, covering much more area than previous instruments and gathering data as often as every 15 seconds.

Among other landmarks, CoMP collected the first-ever coronal observations of Alfvén waves, fast-moving perturbations that emanate from the Sun along magnetic field lines. Previously detected only in the heliosphere, the waves were found to be far more prevalent than expected within the corona, where their influence is subtle. “Alfvén waves can provide us with a window into processes that are fundamental to the workings of the Sun and its impacts on Earth,” noted NCAR principal investigator Steven Tomczyk in 2007, when the findings were published in Science.

In February, NCAR technicians installed CoMP at the center’s Mauna Loa Solar Observatory (MLSO), which monitors solar activity on a year-round basis. Placing CoMP at Mauna Loa will greatly expand the observing opportunities for the instrument, which requires pristine skies. Observers will be able to operate CoMP on more than 300 clear days each year in Hawaii, compared to about 30 in New Mexico. “It is a huge improvement,” says Tomczyk.

To make room for CoMP, the observatory replaced its former Prominence and Inner Coronal Studies instrument with a more compact sensor that detects the same emission line of hydrogen, known as h-alpha, but at a fraction of the cost and with higher spatial resolution. 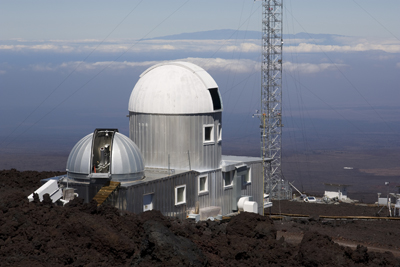 Other changes are in the offing. By late 2012, a new coronagraph, part of the forthcoming COronal Solar Magnetism Observatory (COSMO), will replace the current K-coronameter, which has been in place since 1980. The new instrument will provide significantly better temporal resolution and signal-to-noise ratio, plus more uniform spatial resolution. These qualities will allow for better monitoring of coronal mass ejections (CMEs), a primary driver of space weather. The new instrument can also collect data from lower coronal altitudes than before, which will help spot the onset of CMEs.

For more on the CoMP replacement, see the news story on the HAO website.