Climate change: Drought may threaten much of globe within decades

This news release has been revised to reflect a miscalculation in the original study that inadvertently resulted when simulations of historical drought were combined with simulations of future drought. The revised maps, below, indicate that drought levels on the Palmer Drought Severity Index may reach -10 in certain regions, whereas the levels reached -20 on the original maps. Similarly, upper-latitude areas become less moist than previously projected. Large portions of the globe are still expected to experience dryness that is extreme if not unprecedented. For many regions, the corrected data show the movement toward drought taking place about three decades slower than originally projected.

BOULDER—The United States and many other heavily populated countries face a growing threat of severe and prolonged drought in coming decades, according to a new study by National Center for Atmospheric Research (NCAR) scientist Aiguo Dai. The detailed analysis concludes that warming temperatures associated with climate change will likely create increasingly dry soil conditions across much of the globe in the next 30 years, possibly reaching a scale in some regions by the end of the century that has rarely if ever been observed in modern times.

Using an ensemble of 22 computer climate models and a comprehensive index of drought conditions, as well as analyses of previously published studies, the paper finds much of the Western Hemisphere, along with large parts of Eurasia and Africa, may be at threat of extreme drought this century.

In contrast, higher-latitude regions from Alaska to Scandinavia are likely to become more moist.

The new findings appear this week as part of a longer review article in Wiley Interdisciplinary Reviews: Climate Change. The study was supported by the National Science Foundation, NCAR’s sponsor.

“We are facing the possibility of widespread drought in the coming decades, but this has yet to be fully recognized by both the public and the climate change research community,” Dai says. “If the projections in this study come even close to being realized, the consequences for society worldwide will be enormous.”

While regional climate projections are less certain than those for the globe as a whole, Dai’s study indicates that most of the United States, especially the West, will be significantly drier by the 2030s. Large parts of the nation may face an increasing risk of extreme drought during the century.

Other countries and continents that could face significant drying include:

The study also finds that drought risk can be expected to decrease this century across much of Northern Europe, Russia, Canada, and Alaska, as well as some areas in the Southern Hemisphere. However, the globe’s land areas should be drier overall.

“As Dai emphasizes here, vast swaths of the subtropics and the midlatitude continents face a future with drier soils and less surface water as a result of reducing rainfall and increasing evaporation driven by a warming atmosphere. The term 'global warming' does not do justice to the climatic changes the world will experience in coming decades.  Some of the worst disruptions we face will involve water, not just temperature.”

A portrait of worsening drought

Previous climate studies have indicated that global warming will probably alter precipitation patterns as the subtropics expand. The 2007 assessment by the Intergovernmental Panel on Climate Change (IPCC) concluded that subtropical  areas will likely have precipitation declines, with high-latitude areas getting more precipitation.

In addition, previous studies by Dai have indicated that climate change may already be having a drying effect on parts of the world. In a much-cited 2004 study, he and colleagues found that the percentage of Earth’s land area stricken by serious drought more than doubled from the 1970s to the early 2000s. Last year, he headed up a research team that found that some of the world’s major rivers are losing water.

In his new study, Dai turned from rain and snow amounts to drought itself, and posed a basic question: how will climate change affect future droughts? If rainfall runs short by a given amount, it may or may not produce drought conditions, depending on how warm it is, how quickly the moisture evaporates, and other factors.

Droughts are complex events that can be associated with significantly reduced precipitation, dry soils that fail to sustain crops, and reduced levels in reservoirs and other bodies of water that can imperil drinking supplies. A common measure called the Palmer Drought Severity Index (PDSI) classifies the strength of a drought by tracking precipitation and evaporation over time and comparing them to the usual variability one would expect at a given location.

Dai turned to results from the 22 computer models used by the IPCC in its 2007 report to gather projections about temperature, precipitation, humidity, wind speed, and Earth’s radiative balance, based on current projections of greenhouse gas emissions. He then fed the information into the Palmer model to calculate the PDSI. A reading of +0.5 to -0.5 on the index indicates normal conditions, while a reading at or below -4 indicates extreme drought. The index ranges from +10 to -10 for current climate conditions, although readings below -6 are exceedingly rare, even during short periods in small areas.

By the 2030s, the results indicated that some regions in the United States and overseas could experience particularly severe conditions, with average decadal readings potentially dropping to -2 to -4 in much of the central and western United States as well as several regions overseas, and -4 or lower in parts of the Mediterranean. By the end of the century, many populated areas, including parts of the United States and much of hte Mediterranean and Africa, could face readings in the range of -4 to -10. Such decadal averages would be almost unprecedented.

Dai cautions that global climate models remain inconsistent in capturing precipitation changes and other atmospheric factors, especially at the regional scale. However, the 2007 IPCC models were in stronger agreement on high- and low-latitude precipitation than those used in previous reports, says Dai.

There are also uncertainties in how well the Palmer index captures the range of conditions that future climate may produce. The index could be overestimating drought intensity in the more extreme cases, says Dai. On the other hand, the index may be underestimating the loss of soil moisture should rain and snow fall in shorter, heavier bursts and run off more quickly. Such precipitation trends have already been diagnosed in the United States and several other areas over recent years, says Dai.

“The fact that the current drought index may not work for the 21st century climate is itself a troubling sign,” Dai says. 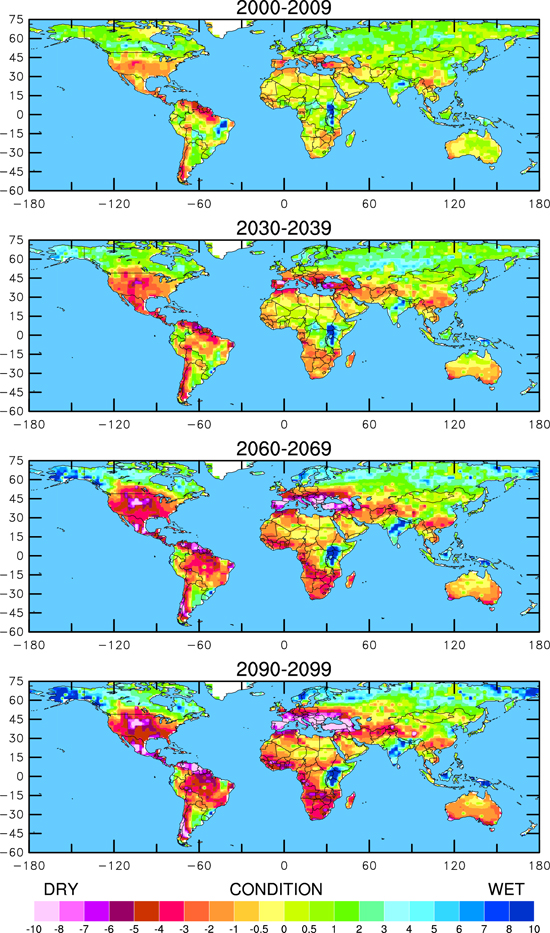 The maps use a common measure, the Palmer Drought Severity Index, which assigns positive numbers when conditions are unusually wet for a particular region, and negative numbers when conditions are unusually dry. A reading of -4 or below is considered extreme drought. Regions that are blue or green will likely be at lower risk of drought, while those in the red and purple spectrum could face more unusually extreme drought conditions. Update: The above maps were uploaded to this article in June 2012. (Courtesy Wiley Interdisciplinary Reviews. This image is freely available for media & nonprofit use*.)