Intrigued by an atmospheric mystery bringing down aircraft, a small group of scientists at NCAR embarked on a series of field studies from the late 1970s through the 1980s. Their findings transformed air safety, and the applied research group they launched at NCAR now extends well beyond aviation.

Scientists had known for decades that thunderstorms could produce strong downdrafts, yet pilots and air traffic controllers still found themselves surprised by sudden wind changes over small distances. After a crash killed 113 people at New York’s Kennedy International Airport in 1975, a safety analyst noticed sharply contrasting reports from aircraft near the crash. Some had found the weather relatively calm, while others reported much worse conditions.

The safety analyst contacted Tetsuya Fujita, a renowned tornado expert from the University of Chicago. Fujita had been puzzling over starburst-like patterns he’d observed on the ground along the paths of strong thunderstorms. It was as if pulses of descending air had landed like bombs, pushing debris in all directions. Fujita suspected that such a downdraft was the culprit at Kennedy, but one far stronger and smaller than usual—a new type that he dubbed a “downburst.”

As with some of Fujita’s earlier discoveries, a number of observers were skeptical. But NCAR’s Robert Serafin and Clifford Murino offered the center’s two new Doppler radars to help Fujita hunt for downbursts. The Illinois State Water Survey provided another Doppler radar, and the three platforms were deployed in the spring and summer of 1978 for the NSF-funded NIMROD study (Northern Illinois Meteorological Research on Downbursts).

NCAR’s James Wilson recalls the day of their first success, 29 May: “We were looking at the radar and we saw a downburst. It was right on top of us.” The area of diverging winds was even more compact than expected, with a change in wind speed of more than 60 miles per hour (100 kilometers per hour) across less than 3 miles (5 km). Fujita labeled the event a “microburst.” 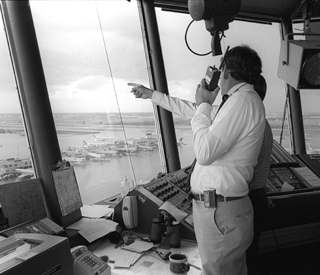 NCAR’s John McCarthy spent much of his time during the summers of 1984 and 1985 in the control tower of Denver’s Stapleton International Airport during the CLAWS project (Classify, Locate, Avoid Wind Shear).

“The FAA was still not ready to admit there was such a thing as a microburst,” says Wilson. That changed midway through the project, as a microburst-related crash killed 153 people in New Orleans. The FAA promptly threw its support behind JAWS before the project concluded later that summer.

In 1984, the Classify, Locate, and Avoid Wind Shear project—again in Denver—brought researchers closer to a wind-shear warning system. Along with documenting more than 180 microbursts, CLAWS reinforced the JAWS discovery of two microburst types. In “dry” microbursts, common in semiarid regions, rain evaporates as it falls, leading to cool downdrafts. In “wet” microbursts, as occurred in New Orleans, intense rain and hail produce pockets of strongly descending air.

The findings from NIMROD, JAWS, and CLAWS were quickly put to use. McCarthy teamed with Boeing and others to produce the Wind Shear Training Aid, now a required training program for all commercial jet pilots in the world. Pilots shared their encounters with wind shear in a series of FAA-funded, NCAR-produced videotapes that trained pilots on microburst survival techniques.
On the research front, Wilson and NCAR’s Rita Roberts proposed a radar-based technique to detect a key precursor to microbursts: air flows converging several kilometers above ground. Collaborating closely with NCAR, the Massachusetts Institute of Technology’s Lincoln Laboratory translated the concept into software that automatically detects wind shear in real time from Doppler radar data. The software has drawn on a network of Doppler radars deployed at dozens of major U.S. airports since the 1990s. Together, these efforts have become a gold standard of technology transfer and saved hundreds of lives: from 1995 to date, no major U.S. aircraft has been felled by a microburst.

Not everyone felt that applied science belonged at a center founded on basic research. “NCAR hadn’t done anything like this before,” notes Wilson. Gaining acceptance for the work took years, acknowledges McCarthy, who led the program until 1997 before joining the Naval Research Laboratory. Today, with RAL one of NCAR’s largest activities, “that fight is long gone.”

"The goal is to reduce crashes, injuries, and deaths."

The dangers of vehicular travel are so notoriously underrated that some white-knuckle fliers don’t think twice about cruising down a packed interstate at more than a mile a minute. Bad weather only increases the risk. An estimated 1.5 million U.S. motor vehicle accidents are associated with poor weather, according to the National Research Council. On average, those mishaps cause about 7,400 deaths and 690,000 injuries.

As it continues working toward safer air travel, NCAR’s Research Applications Laboratory has joined a group that’s addressing the much broader challenge of highway safety. The lab began testing a prototype system in 2009 that uses vehicles as moving weather stations. The data they collect could help alert other drivers to hazardous conditions ahead.

“The goal is to reduce crashes, injuries, and deaths by getting drivers the information they need about nearby hazards,” says NCAR’s Sheldon Drobot. Drivers would be notified of conditions they can expect to encounter in the next few seconds and minutes, giving them a chance to slow down or take other action. 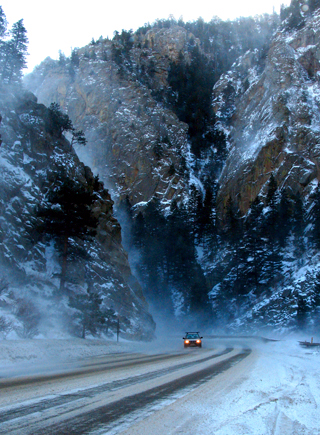 The road-weather information system is part of IntelliDrive, a U.S. Department of Transportation initiative aimed at reducing accidents, increasing mobility, and reducing environmental impacts. Within a few years, if all goes according to plan, motor vehicles will be sharing information automatically with each other and with central databases. Along with alerts on hazardous weather, drivers might receive warnings about nearby vehicles that are moving erratically or running through a red light.

One of the biggest challenges will be dealing with data from millions of moving platforms. “It’s not enough to process the information almost instantaneously,” says William Mahoney, who oversees the system’s development for NCAR. “It needs to be cleaned up, sent through a quality control process, blended with traditional weather data, and eventually delivered back to drivers.” As a side benefit, meteorologists would glean a wealth of detail on local conditions that could help improve forecasts for motorists and nonmotorists as well. 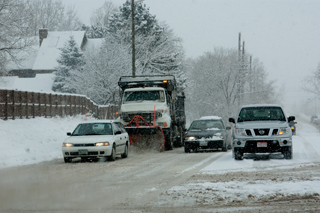 As with the safety systems they helped craft for pilots, the NCAR researchers are taking pains to ensure that the weather warnings issued by IntelliDrive are succinct and easy to comprehend. For now, the vehicles are doing their part, according to Drobot: “The tests show that cars can indeed communicate critical information about weather conditions and road hazards.”