BOULDER—Cities worldwide are failing to take necessary steps to protect residents from the likely impacts of climate change, even though billions of urban dwellers are vulnerable to heat waves, sea level rise, and other changes associated with warming temperatures. 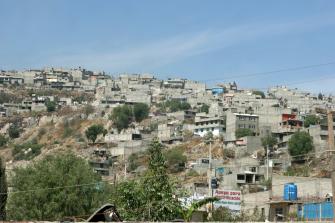 Houses cling to a hillside near Mexico City. Urban areas around the world, especially impoverished areas, are failing to prepare for the likely impacts of climate change. (©UCAR, Photo by Carlye Calvin. This image is freely available for media use. For more information, see Media & nonprofit use.*)

A new examination of urban policies by Patricia Romero Lankao at the National Center for Atmospheric Research (NCAR), in conjunction with an international research project on cities and climate change, warns that many of the world’s fast-growing urban areas, especially in developing countries, will likely suffer disproportionately from the impacts of changing climate. Her work also concludes that most cities are failing to reduce emissions of carbon dioxide and other greenhouse gases that affect the atmosphere.

“Climate change is a deeply local issue and poses profound threats to the growing cities of the world,” says Romero Lankao. “But too few cities are developing effective strategies to safeguard their residents.”

Romero Lankao’s studies appear this month in a special issue of Current Opinion in Environmental Sustainability and in a synthesis article in an upcoming issue of European Planning Studies. The research was conducted in association with the United Nations Human Settlements Programme (UN-HABITAT) and funded by the National Science Foundation, NCAR’s sponsor.

With more than half the world’s population living in cities, scientists are increasingly focusing on the potential impacts of climate change on these areas. The locations and dense construction patterns of cities often place their populations at greater risk for natural disasters, including those expected to worsen with climate change. Potential threats associated with climate include storm surges that can inundate coastal areas and prolonged hot weather that can heat heavily paved cities more than surrounding areas.

The impacts of such natural events can be magnified in an urban environment. For example, a prolonged heat wave can exacerbate existing levels of air pollution, causing widespread health problems. Poorer neighborhoods that may lack basic facilities such as reliable sanitation, drinking water, or a dependable network of roads are especially vulnerable to natural disasters. Moreover, populations are increasing most quickly in small- and medium-sized urban areas, which often lack the services and infrastructure to manage the rapid influx, according to Romero Lankao.

Little defense for the vulnerable 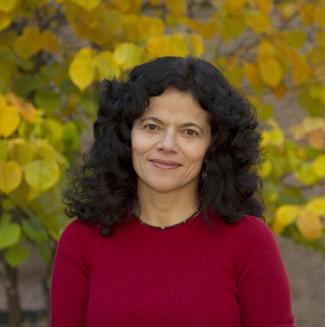 Patricia Romero Lankao (©UCAR, Photo by Carlye Calvin. This image is freely available for media use. For more information, see Media & nonprofit use.*)

The number of urban residents worldwide has quadrupled since 1950, and cities are continuing to grow rapidly, especially in developing nations. Romero Lankao cites projections that, by 2020, there will be more than 500 urban areas with 1 million or more residents. Many residents in poorer countries live in substandard housing without access to reliable drinking water, roads, and basic services. Neighborhoods sometimes spring up on steep hillsides or floodplains, leaving them vulnerable to storms.

But even on the heels of deadly catastrophes that scientists say will become more common with climate change, such as flash floods in Rio de Janeiro or heat waves in Europe, leaders are often failing to reinforce their defenses against natural disasters.

Romero Lankao cites three reasons for the failure to prepare: fast-growing cities are overwhelmed with other needs, city leaders are often under pressure to downplay the need for health and safety standards in order to foster economic growth, and climate projections are rarely fine-scale enough to predict impacts on individual cities.

“Local authorities tend to move towards rhetoric rather than meaningful responses,” Romero Lankao writes. “What is at stake, of course, is the very existence of many human institutions, and the safety and well-being of masses of humans.”

Cities are also failing in many cases to curb their own emissions of greenhouse gases, the study finds. Instead of imposing construction standards that could reduce heating and air conditioning needs or guiding development to emphasize mass transit and reduce automobile use, many local governments are taking a hands-off approach.

“Cities can have an enormous influence on emissions by focusing on mass transit systems and energy efficient structures,” Romero Lankao says. “But local leaders face pressures to build more roads and relax regulations that could reduce energy use.”

The study also cites efforts in some cities to reduce emissions as part of a larger strategy to ease traffic and other problems. For example, central London’s Congestion Charging Zone is intended to encourage more use of mass transit. And several Latin American cities, such as Curitiba, Brazil, and Bogota, Colombia, are integrating new development with mass transit systems.

As cities attempt to meet the needs of their low-income residents, some strategies—including moving residents away from risk-prone areas and improving housing and services—may also improve their readiness for a changing climate.

“As hubs of development, cities have shown that they can become sources of innovation,” Romero Lankao says. “The good news is that policymakers can discover ways to improve sanitation, health, and safety as they try to reduce emissions and adapt to climate impacts.”