8 September 2011  •  A balloon-borne instrument sailing in the Arctic stratosphere in June obtained some of the best observations to date on the high-speed, Sun-driven winds that howl through the thermosphere more than 100 kilometers (60 miles) above Earth. Launched from Esrange, Sweden, the instrument—an upward-pointing Fabry-Perot interferometer dubbed HiWind—gathered data amid round-the-clock sunlight during a three-day journey that ended in Nunavut, Canada. 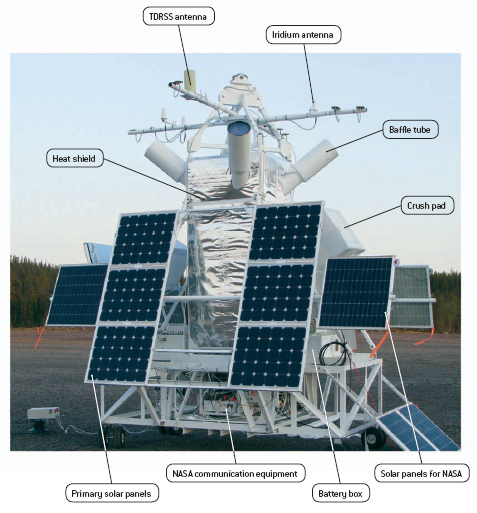 HiWind’s solar panels are continuously positioned to face the sun during flight to provide power for the instrument and shade critical areas of the payload from intense solar radiation. A large radiator at the rear of the payload allows precise thermal control of sensitive components inside the instrument. Pointing information is provided via differential GPS and a Sun detector developed by NASA to drive a motorized rotator between the payload and the balloon. (Photos by Greg Card.)

“There have been many attempts to measure daytime thermospheric winds from ground-based and satellite-borne instruments, but many have only obtained mixed results,” says NCAR’s Qian Wu. “I’m very excited about HiWind, as it will make a big difference.”

“It was very rewarding to see HiWind leave the launch vehicle and silently drift into the early morning sky,” says Card, who served as project engineer and traveled to Canada to retrieve instrument data from the recovery site.

Researchers need wind data from the thermosphere in order to validate models. NCAR maintains two ground-based Fabry-Perot interferometers, one at each pole, that provide nighttime data on high-altitude winds. However, the same sunlight that generates the strongest thermospheric winds also complicates their measurement from below. “The background scatter is pretty high in sunlight, and the signal we’re looking at is pretty weak,” says Wu. “We’re trying to analyze wind speeds on the order of a few meters per second by measuring a very minute Doppler shift in the light.” There’s much less scatter from sunlight in the thin stratosphere than on the ground, Wu notes.

Data from HiWind will help scientists study the impact of heating in high-latitude regions on thermosphere global circulation, the interaction between the thermosphere and ionosphere above the polar cap during the summer, and how energy is transferred from the solar wind to Earth’s upper atmosphere. The data will also be used to validate two key NCAR community models: TIEGCM (Thermosphere Ionosphere Electrodynamic General Circulation Model) and WACCM (Whole Atmosphere Community Climate Model).

Wu and colleagues are now cultivating partners from academia, including Bodo Reinisch (University of Massachusetts at Lowell), and hope to re-fly HiWind in 2013 and 2014. “The data are certainly of interest to many university users,” says Wu. 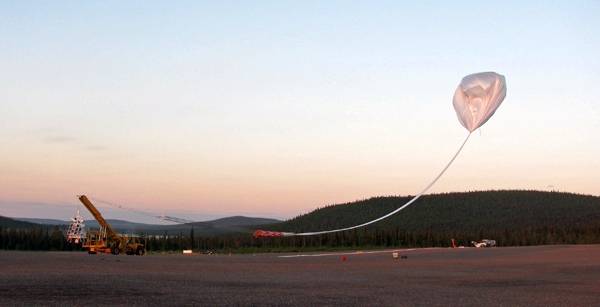 HiWind took off from a launch facility in Esrange, Sweden. (Photo by Greg Card.)