A whirlwind of research

February 10, 2009 | The concept of harnessing the wind’s energy is hardly new—Egyptian vases from 3,500 B.C.E. depict ships under sail. Still, wind is among the most difficult weather variables to forecast. Topography, ground cover, temperature inversions, and foliage all affect its strength and direction. 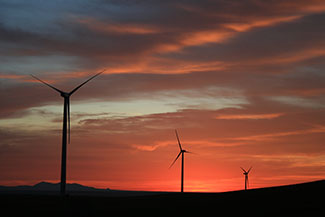 As wind energy grows in importance, this forecast problem is taking on new urgency, with several groups at NCAR studying how wind turbines and farms interact with the atmosphere and how their output can be better predicted and managed.

In December, NCAR finalized an agreement with Xcel Energy to provide highly detailed, localized weather forecasts to help the utility company’s wind energy production. The forecasts will enable Xcel to better integrate electricity generated from wind into the power grid, in particular by helping plant operators decide when to power down traditional coal and natural gas plants and rely on wind energy instead.

“One of the major obstacles that has prevented more widespread use of wind energy is the difficulty in predicting when and how strongly the wind will blow at wind farms,” says Bill Mahoney, who oversees the project for RAL. “These forecasts are a critical step in using more energy from wind.”

Over the next year and a half, NCAR will develop a prototype advanced wind prediction system and begin generating test forecasts for Xcel wind farms in Colorado, Minnesota, New Mexico, Texas, and Wyoming. Experimental forecasts may start as soon as May. NCAR will eventually transfer the system over to Xcel. If successful, other wind forecasting companies in the United States and overseas may adopt the technology in their push to help utilities transition away from fossil fuels. 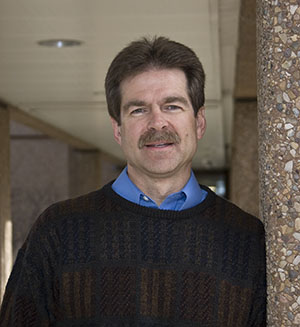 Bill Mahoney and colleagues in RAL are helping Xcel Energy predict when and where the wind will blow.

Researchers in RAL have built a unique modeling capability, called the Real-Time Four Dimensional Data Assimilation (RTFDDA) system, that is based on the Weather Research and Forecasting model (WRF). RTFDDA collects diverse weather observations from various platforms: upper-air and surface reports, commercial aircraft reports, mesonets, and data from radars, wind profilers, satellites, and other instruments, and assimilates these data using a technique designed to increase their impact on the analysis of the initial conditions.

The purpose of the system is to pinpoint the wind conditions in the vicinity of wind turbines, which generally stand about 200−400 feet (60−122 meters) above the ground, arrayed in tightly clustered wind farms. Winds at these heights are usually far stronger than at 33 feet (10 meters), the height used by ground-level weather stations.

Traditional wind forecasts rely heavily on statistical forecasting methods, since numerical weather forecast products available from operational centers are produced with coarse-grid, larger-scale models. The RTFDDA system is designed to provide a bird’s-eye view of local weather through a multiple-level downscaling algorithm. The RAL researchers hope that the system will immediately cut error rates by 5 to 10%. Their long-term goal is to reduce the error rate to less than 25%, which would help make the costs of wind energy more competitive against traditional power plants.

The research behind RTFDDA sprang from RAL’s work in modeling weather for U.S. Army test ranges and national security programs; researchers enhanced WRF for this purpose to provide small-scale, high-resolution weather forecasts. “We designed the model for the Army test ranges, but the technology is readily applicable to wind energy,” explains lead modeler Yubao Liu.

More than half of all U.S. states have adopted formal green energy goals, a number of them mandating that utilities increase use of renewable energy as a way to reduce dependence on fossil fuels. The New York Times reported in December that Congress and the Obama administration may impose a mandate that the nation get 10 or 15% of its electricity from renewable sources within a few years; currently, less than 3% of the nation’s electricity comes from renewable sources, not including hydroelectric.

Using wind as an energy source poses unique ­challenges, however. Not only is wind notoriously difficult to predict and manage, but large amounts of electricity cannot be stored in a cost-effective manner, meaning that any power generated by a wind turbine or power plant must be promptly consumed. If an electric utility powers down a coal or natural gas–fired facility in anticipation of wind-driven energy, those plants may not be able to power up fast enough should the wind fail to blow. The only option in such a scenario is to buy energy on the spot market, which can be very costly. Conversely, if the wind blows more strongly or erratically than anticipated, the surge of energy can overload the system.

A series of scale problems

In ESSL/MMM, Peter Sullivan and Ned Patton are doing basic turbulence research that underlies wind energy. Using supercomputers, they create simulations of atmospheric turbulence that they use to explore problems ranging from large scale (where should wind turbines be placed?) down to very small scales (characterizing the wind field within which a turbine’s blades operate).

One of their research questions is where to site wind farms, beyond the obvious—where the wind blows. Land-surface characteristics such as hills, trees, and the turbines themselves interact with the atmosphere to influence local wind speed, direction, and turbulence characteristics. Another consideration is how to space turbines. Because a wind turbine creates a wake behind it, when turbines are grouped together in wind farms, the wakes affect each other and can result in wind farms underproducing compared to expectations. “This is a really important issue because there are aspects to optimizing turbine spacing that can lend to enhanced energy capture,” Ned explains.

Another pressing issue for the wind industry is the structural fatigue that results as turbines wear down under the wind’s pressure. Most turbines are built to last 20 years, but their actual lifetime is closer to five. Peter and Ned are collaborating with researchers outside NCAR to simulate extreme wind, wind shear, and turbulence events that stress turbines, with the goal of improving their design.

These graphs show changes in turbulent energy as wind flows left to right over two hilly land surfaces, the first with sparse vegetation and the second with vegetation ten times denser. The dashed black line represents the tops of trees, while the top of the image is 80 meters (260 feet), which is close to the height of modern wind turbine hubs whose blades are typically 40–50 meters (130–165 feet) long. When all other parameters are held constant, an increase in vegetation density can dramatically increase turbulence kinetic energy up to heights within which wind turbines operate. (Images courtesy Ned Patton, ESSL/MMM.)

In an intriguing study, Don Lenschow (MMM and EOL) collaborated with David Keith (University of Calgary) and former NCAR scientist Phil Rasch (Pacific Northwest National Laboratory) to study how wind farms could affect climate. Their goal was to determine what would happen if massive wind farms blanketed large portions of Earth, large enough to produce a significant fraction of the world’s total electrical energy.

Don provided input on the boundary layer and turbulence, while Phil helped with modeling using a global general circulation model. The research, which was led by David and published in Proceedings of the National Academy of Sciences in 2004, showed that massive wind farms—on the scale of covering most of the U.S. Midwest along with most of Europe and a large area of east Asia—had an impact on climate in the model simulations, albeit minor.

“The differences were small,” Don says. “It didn’t change overall global temperature, but it changed the distribution of temperatures.”

By adding drag to the atmosphere, massive wind farms could perturb the general circulation. Temperatures in the northern temperate and polar regions cooled slightly in the study, with compensating warming in the vicinity of the wind farms.

Don emphasizes that the effect is hardly noticeable and not significant except in the case of unrealistically large wind farms. “But we do think it was an interesting result, not from the standpoint of changing our ways of incorporating wind energy, but from the standpoint of satisfying curiosity and comparing the climatic effects with other energy sources,” he says. “You really can’t do large projects on planet Earth without having some impacts that are global.”