NCAR wind forecasts save millions of dollars for Xcel Energy

By issuing forecasts that are 35 percent more accurate than previous forecasting methods, the system enables utility operators to constantly anticipate the amount of energy produced by wind farms across Xcel Energy's service area. As a result, the utility can make critical decisions about saving money by powering down traditional coal and natural gas plants when possible while reliably meeting the needs of its customers. 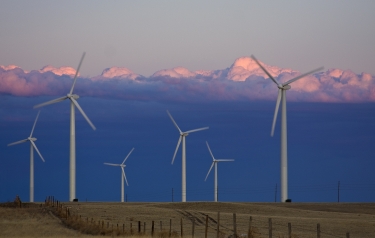 Wind turbines near Grover, Colorado. (©UCAR. Photo by Carlye Calvin. This image is freely available for media use. For more information, see Media & nonprofit use.*)

“The goal of this project is to make it more affordable for Xcel Energy to bring on more wind energy,” says William Mahoney, an NCAR program director overseeing the project. “Xcel Energy has been very proactive in adding wind energy to its system, but one of the major obstacles is the difficulty in predicting when and how strongly winds will blow at the locations of turbines. Every fraction that we can improve the forecasts results in real savings.”

The system, which has become increasingly accurate since NCAR entered into a contract with Xcel Energy to begin developing it in 2009, saved the utility $6 million in 2010. Future savings will vary from year to year, depending on such factors as prices of other energy sources and the amount of wind in a given year.

The wind energy forecasting system relies on a suite of tools, including highly detailed observations of atmospheric conditions and an ensemble of cutting-edge computer models. It issues frequent high-resolution wind energy forecasts, updated with new information every 15 minutes, for wind farm sites.

It is used for wind farms in states served by Xcel Energy, including Colorado, Minnesota, New Mexico, Texas, and Wisconsin.

The U.S. Department of Energy’s National Renewable Energy Laboratory supported the project by evaluating several mathematical formulas to calculate the amount of energy that turbines generate when winds blow at various speeds and directions.

"Wind is challenging because of the impacts it can have on our operations due to its intermittency,” says Eric Pierce, Xcel Energy's managing director of energy trading/commercial operations. “This new forecasting system will enable us to harness wind far more effectively while saving millions of dollars for our customers. We are very pleased to use this as a key tool toward building a diverse portfolio.”

More than two dozen states have mandated that utilities increase their use of renewable energy as a way to reduce dependence on fossil fuels such as coal, oil, and natural gas, which affect air quality and release greenhouse gases associated with climate change. But the shift to wind means relying on a resource that is notoriously difficult to predict and manage.

Energy generated by a wind turbine or any other source must be promptly consumed because large amounts of electricity cannot be stored in a cost-effective manner. If an electric utility powers down a coal or natural gas facility in anticipation of wind-driven energy, those plants may not be able to power up fast enough should the winds fail to blow. The only option in such a scenario is to buy energy on the spot market, which can be very costly.

Conversely, if the winds blow more strongly or erratically than anticipated, the surge of energy can overload the system.

Forecasting wind around turbines is challenging because landscape features such as hills and trees can reshape the wind speed and direction and cause turbulence in ways that may greatly influence the amount of energy that is produced. In addition, most forecasting models are designed to generate information about winds close to ground level rather than at about 200 feet, which is where Xcel’s turbine hubs are typically located. 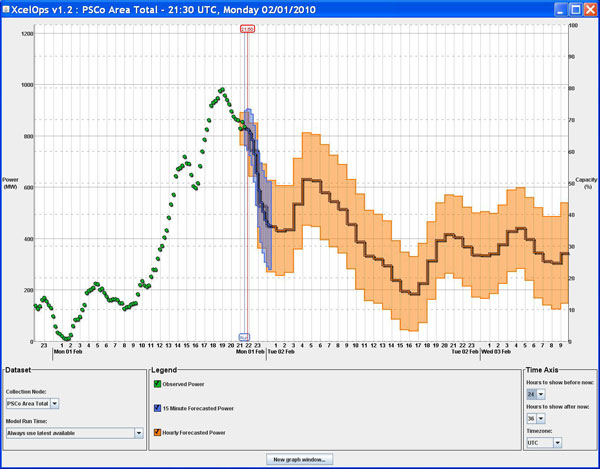 Sample output from NCAR's wind energy prediction system for Xcel Energy. The time moves ahead from left to right, with hours (in UTC) shown along the horizontal axis at bottom and power output (in megawatts) shown along the vertical axis at left. The green dots at left represent actual power generated in megawatts up to the initial forecast point of 2130 UTC (2:00 pm Mountain Time) on February 1, 2010.
The solid line shows the predicted power in megawatts for the next 36 hours. Orange shading around the solid line represents the typical forecast error from the preceding seven days. The actual wind should fall within the orange prediction zone about 75% of the time.
Operators can choose to display data by turbine, farm, or larger region, and by time up to 120 hours in the future. (©UCAR. Image courtesy NCAR and Xcel. This image is freely available for media use. For more information, see Media & nonprofit use.*)

To generate the forecasts, the NCAR system incorporates observations of current atmospheric conditions from a variety of sources, including satellites, aircraft, weather radars, ground-based weather stations, and sensors on the wind turbines themselves. The information is fed into four powerful NCAR-based tools:

The project builds on forecast technologies that NCAR has successfully developed for the U.S. military, National Weather Service, aviation industry, U.S. Department of Transportation, overseas governments, and other organizations in the public and private sectors.

Although Xcel Energy now runs the system, NCAR will continue to make refinements, such as making it easier to add wind farms to the forecasting system. In addition, the system will continue to become more accurate, with the software automatically making adjustments based on any differences between the energy forecasts and actual energy generation.