Sudden heat-ups of the outer atmosphere are gaining attention for their impacts on communications, but can they be forecast?

November 17, 2011  • Winter weather usually conjures up images of events that we can see or feel, like fluffy snowflakes or pelting sleet, freezing temperatures or gusts of wind.

But there’s also a wintertime phenomenon that unfolds high in the stratosphere, and it can have significant effects on radio communications, GPS signals, and other sensitive electronic systems that rely on satellites. 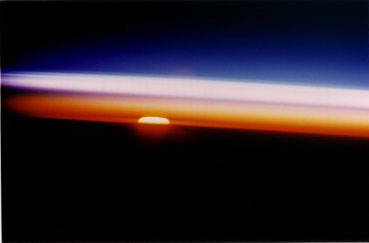 Layers of smoke, dust, and aerosol make the stratosphere visible (the band of white) above the troposphere (band of purple) and the Sun in this NASA space shuttle photo. The stratosphere of the Northern Hemisphere can undergo dramatic warming events during winter. (Photo courtesy NASA.)

Known as sudden stratospheric warmings, these events take place during winter in the Northern Hemisphere. During an event, areas of the stratosphere abruptly heat up by 20, 30, or more degrees Fahrenheit (10, 20, or more degees Celsius) while expanding and becoming less dense. This sets off a chain reaction that reverberates to regions of the outer atmosphere, such as the ionosphere, whose physical state is critical for radio signals and satellite operations.

Scientists are using a combination of observations and computer models to better understand what causes these sudden warming events. For example, a recent study led by NCAR scientist Jadwiga Richter used a sophisticated computer model to find a link between tropical atmospheric patterns, such as the El Niño–Southern Oscillation, and the frequency and characteristics of sudden stratospheric warmings.

Researchers are also examining the unusual checkerboard pattern of disturbances caused by the events. The influences of those disturbances reaches from the upper latitudes toward the equator and from the stratosphere to other layers of the atmosphere.

“These are very complex phenomena that can affect a surprisingly large region of the atmosphere,” says NCAR scientist Hanli Liu, an upper atmosphere specialist. 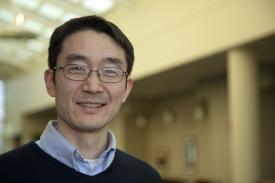 events, which can still heat the stratosphere by about 45°F (25°C), take place more often.

The warmings are triggered by perturbations in the atmosphere known as Rossby waves, that are shaped by Earth’s rotation. These waves begin at the surface and propagate upward. Scientists are uncertain, however, why some wintertime Rossby waves trigger the warmings while others do not.

These phenomena occur only during Northern Hemisphere winter months because that’s when the prevailing winds in the stratosphere blow from west to east, mirroring the predominantly eastward flow in the troposphere, the layer of the atmosphere between the stratosphere and the surface. During a warming event, the impact of the Rossby wave is to push stratospheric air toward the pole and force it downward, compressing the air and causing heating.

“Right now it’s impossible to provide reliable long-range forecasts of when to expect a sudden stratospheric warming,” says Liu. “If scientists can learn enough about these events to predict them and their impacts on the thermosphere and ionosphere, that would provide great benefits to society by minimizing disruptions to telecommunications systems.”

>>>
About Hanli Liu
About the Whole Atmosphere Community Climate Model