The quest for a smooth, safe flight

August 3, 2009 | More than three million people around the world fly on commercial aircraft every day. According to the International Civil Aviation Organization, in 2007 there were only 0.014 deaths for every 100 million passenger-kilometers (about 0.023 deaths per 100 million miles), giving air travelers the confidence-inspiring odds of more than a million to one of surviving a typical journey, and likely even better odds in countries with high safety standards for aviation. 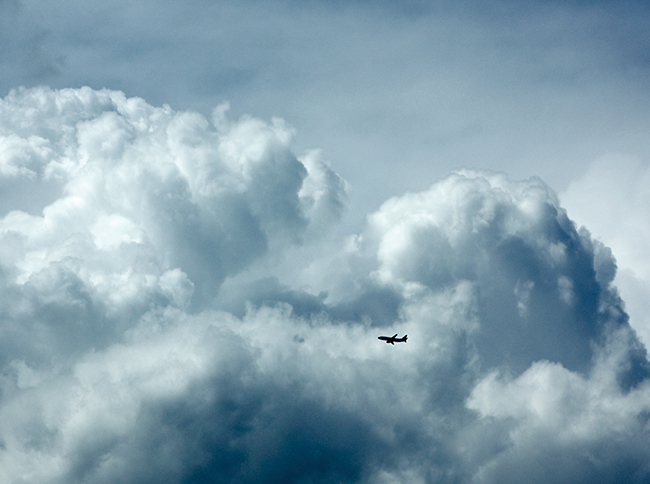 And yet the crashes of Air France Flight 447 and a Yemeni Airbus this summer have drawn attention to aviation safety, the Air France accident in particular raising questions about whether adequate information about storms and turbulence over remote ocean regions is available.

Nearly 30 years ago, a Federal Aviation Administration program to solve the riddle of microbursts—intense downdrafts that used to pose great danger to aircraft—led to the birth of NCAR’s Research Applications Program, which later became RAL. Having countered the threat of microbursts, RAL researchers now address a wide range of weather hazards for aviation, including storms, lightning, and turbulence. Scientists in ESSL/HAO are also applying their research to aviation safety, developing a system for protecting air travelers from radiation exposure. 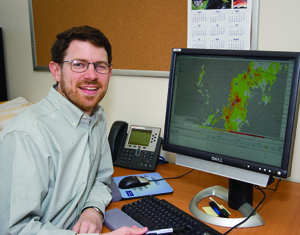 RAL’s John Williams is working with a team of ­researchers to develop a prototype system to provide pilots with updates about severe storms and turbulence as they fly across the open ocean between continents.

RAL’s John Williams, Cathy Kessinger, and Bob Sharman, working with a team of software engineers led by Gary Blackburn and Nancy Rehak, are developing a prototype system to provide pilots with updates about severe storms and turbulence as they fly across the open ocean between continents. The NASA-funded system, which draws on earlier oceanic nowcasting and turbulence forecasting work, aims to guide aircraft away from intense weather, such as the deep convection that Air France Flight 447 apparently encountered before crashing into the Atlantic Ocean.

“Pilots currently have little weather information as they fly over remote stretches of the ocean, which is where some of the worst turbulence encounters occur,” John says.

The new, global system is based on the approach used by RAL’s Graphical Turbulence Guidance (GTG) system, which alerts pilots and air traffic controllers to turbulence over the continental United States. For remote ocean regions, the new system works by combining satellite data and computer weather ­models with an artificial intelligence technique known as “random forests” that has proven useful for forecasting storms and storm-generated turbulence over land.

The component of the system that identifies major storms over the ocean is already available for aircraft use on an experimental basis. The entire prototype system is on track for testing next year, when pilots on select transoceanic routes will receive real-time turbulence updates and provide feedback to the ­researchers. When the system is finalized in about two years, it will be capable of generating routine, global 3-D maps of storms and turbulence that can be used to provide real-time information to pilots and ground-based controllers.

A dearth of data above the seas

Currently, pilots of transoceanic flights receive preflight briefings and, in certain cases involving especially intense storms, in-flight weather information that is usually updated every four hours. They also have onboard radar, but these units are designed to detect precipitation, whereas turbulence is often located far from the most intense precipitation. 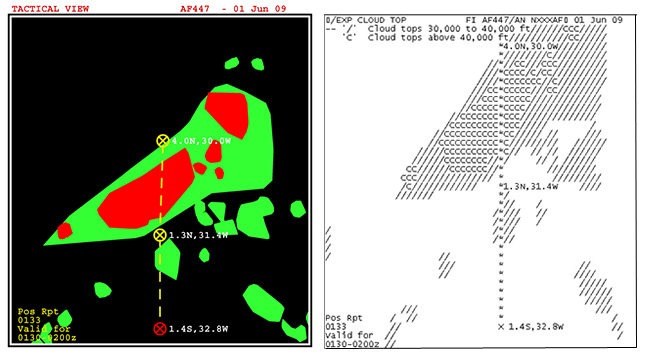 These two maps, based on an analysis of satellite data, show the heights of storm clouds—which often correlate with storm intensity—along the flight path of Air France Flight 447. Each map shows the same information, including flight path with waypoint coordinates (latitude and longitude), cloud tops at 30,000 to 40,000 feet (green or /), and cloud tops above 40,000 feet (red or C).

Although transoceanic flights do not currently receive this type of information, researchers in RAL have created a prototype system to generate graphical (left) and text-based (right) displays. They’ve designed the displays to be provided to pilots via uplink on an experimental basis. Over the next two years, the team is developing a more sophisticated system that will identify areas of likely turbulence in storms and clear air. (Images courtesy Gary Blackburn, Cathy Kessinger, and John Williams, RAL.)

These and other gaps in observation make pinpointing turbulence over the ocean far more challenging than over land. Weather satellites are often the only source of information over remote regions, and they tend to provide images less frequently than over land, making it difficult to capture fast-changing ­conditions. They also do not directly measure turbulence.

As a result, pilots often must choose between detouring hundreds of miles around potentially stormy areas or taking a chance and flying directly through a region that may or may not contain intense weather. Thunderstorms can develop quickly and move rapidly, rendering weather briefings and updates obsolete.

The GTG system provides real-time maps of turbulence at various altitudes over the continental United States. Such a system, had it covered remote ocean regions, could possibly have alerted the pilots of the doomed Air France flight to the stormy conditions along their flight path, although the cause of that disaster has not been determined. “It seems likely that the information provided by a real-time uplink of weather conditions ahead would have, at a minimum, improved the pilots’ situational awareness,” John says.

“Even over the middle of the ocean, where we don’t have land-based radars or other tools to observe storms in detail, we can still inform pilots about the potential for turbulence and possibly lightning,” Cathy adds. 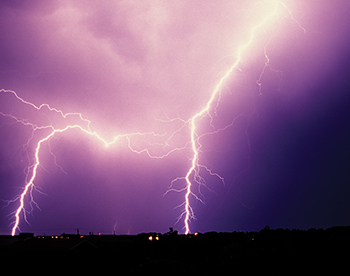 Lightning strikes on aircraft are quite common—as frequent as one strike per year on each commercial airplane, according to some estimates. Although lightning strikes were responsible for a number of crashes in the 1960s and ‘70s, today the damage is usually limited to superficial scorch marks on a plane’s exterior, thanks to advances in aircraft technology.

Modern aircraft skins are made primarily of either aluminum or advanced composite fibers that conduct electricity well, allowing currents to flow through the skin without affecting the plane’s interior. Commercial aircraft are also fitted with electrical discharge wicks on their wingtips that dissipate electricity from lightning strikes away from the fuselage. The sensitive electronic equipment and wiring inside a plane is shielded and precautions are taken to assure that lightning currents cannot cause sparks near an aircraft’s fuel system.

There is still a remote risk, however, that lightning can disable a plane’s electronics. (Early speculation suggested this was the case with Air France Flight 447.) In RAL, researchers working on turbulence and convection are starting up a project that may reveal whether or not lightning is present in a storm.

“Any time you’re close enough to the updrafts and downdrafts in a storm, you run the risk of being hit by lightning or experiencing turbulence,” Cathy says. “You want to be far away from these weather hazards. Thunderstorm anvils can also produce lightning and turbulence hazards.”

Cathy and Wiebke Deierling have funding from NASA to study how to use satellite signatures to test the likelihood of lightning in storms. They plan to collect data sets from satellites and compare them to data from ground-based sensors and other sources, testing equations that correlate to the presence of lightning. This will allow the satellite-based signatures to be applied to oceanic regions that are too remote to be covered by ground-based lightning detection systems.

Severe weather and turbulence aren’t the only hazards to air travel. Exposure to cosmic radiation (radiation originating from the Sun and outer space) is a growing concern for the health and safety of commercial airline crews, so much so that the Environmental Protection Agency, Federal Aviation Administration, and International Commission of Radiobiological Protection consider commercial aircraft crews to be radiation workers. Low-dose radiation is associated with cancer, although there is little evidence so far that occupational exposure to cosmic radiation increases cancer risk.

Cosmic radiation levels rise with altitude, exposing flight crews and passengers to more radiation than they would be subjected to on Earth’s surface. The radiation exposure at commercial flight altitudes of 30,000–40,000 feet (9–12 km) is about 100 times higher than on the ground. Flight crews, who can spend up to 1,000 hours per year aboard aircraft, are exposed to cumulative radiation doses in the range of 2 to 5 milliSievert (mSv) per year, in addition to the usual dose of 2 to 3 mSv 0received per year through human-caused and natural radiation sources. 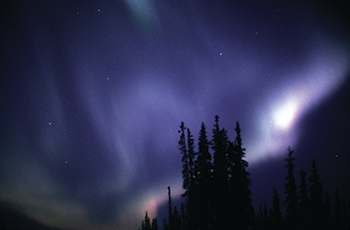 In ESSL/HAO, researchers are involved with Nowcasting of Atmospheric Ionizing Radiation for Aviation Safety (NAIRAS), a NASA-funded program to develop tools for communicating space weather radiation hazards to the aviation community, particularly to those involved in high-altitude and high-latitude flights. (Radiation exposure is greater at high latitudes, since Earth’s magnetic field concentrates cosmic radiation near the poles.)

“What we’re trying to do is develop a numerical forecasting tool to tell people what the environment is like,” says HAO scientist Mike Wiltberger.

Cosmic radiation is part of Earth’s natural background environment; however, levels increase when solar storms and solar flares cause solar energetic particle (SEP) events, sending high-energy particles into Earth’s atmosphere. The HAO researchers are primarily focusing on these SEP events for NAIRAS, drawing from models of the magnetosphere (the region that surrounds Earth’s magnetic field, preventing most of the Sun’s particles from reaching Earth). The project is still in the early stages, but the team’s goal is to assess the incoming radiation environment and pass these data along to research partners who will then forecast radiation at specific altitudes and points in time.