Bob Henson | March 23, 2012  •  The last 10 days have brought what may be the gentlest round of extreme weather ever to grace the United States. It’s hard to think of March temperatures in the 70s and 80s as anything other than delightful. Yet beneath that pleasant veneer lies one of the most bizarre weather episodes in recent U.S. history. A summerlike dome of high pressure across the Midwest, coupled with a stream of warm, humid air from the Gulf of Mexico to Canada, sent temperatures soaring to unheard-of levels for this time of year. 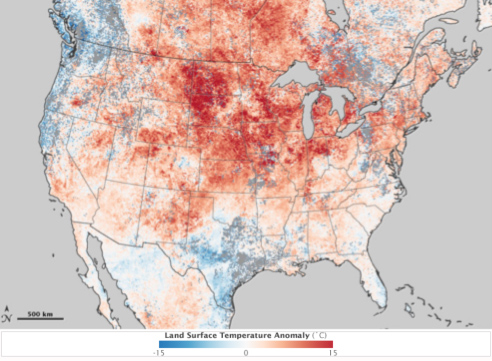 This NASA depiction of land-surface temperature anomalies between March 8 and 15 shows the effects of the Great Warm Wave kicking off across the Great Plains of the United States and central Canada. In some areas, the land surface was more than 18°F (10°C) warmer than average. (Image courtesy NASA Earth Observatory.)

This “warm wave,” which is just now beginning to wind down, is exceptional in many ways. It’s been long lasting, widespread, and extreme—that is, extreme in terms of how far it’s strayed from seasonal norms.

Yet it took a while for reporters to begin paying serious attention to the unusual warmth and some of its implications, including record pollen counts and early budding of trees. Perhaps this is because balmy temperatures and sunshine just don’t seem “extreme” compared to the death and destruction parceled out by, say, a major hurricane or a deadly midsummer heat wave. An old media saying has it that “if it bleeds, it leads”—but video of people sunbathing and flowers blooming can’t compete with houses being ripped apart or emergency cooling centers packed with the infirm.

Those who pay regular attention to weather details, including National Weather Service (NWS) forecasters and leading weather bloggers, have struggled to capture the magnitude of this event without hyperventilating. It’s not been easy, given the bevy of truly astounding records.

Rather than try to provide chapter and verse here, I’ll simply highlight 10 of the most intriguing aspects of the Great Warm Wave of March 2012. If you want to dig deeper, you’ll find extensive coverage in the last few days of posts at WunderBlog, Capital Weather Gang, Climate Central, and Accuweather, among other national and local news sources. Several local NWS offices have also constructed very helpful pages that put the last few days of records in context. Check out these summaries from Duluth and Minneapolis, Minnesota; Milwaukee, Wisconsin; Omaha, Nebraska; Chicago, Illinois; and Gaylord, Grand Rapids, and Detroit, Michigan. (You can check other local offices for similar information by going to the main NWS page and clicking on the region of interest, which takes you to that area’s website.)

Here are my picks for 10 top facets of the Great Warm Wave of 2012, in no particular order.

According to the invaluable U.S. Records page—the NOAA site that compiles records set at official U.S. weather stations—there were 6,477 daily record highs set or tied from March 1 to 22, 2012. That compares to a paltry 345 daily record lows. (A daily record means the highest or lowest temperature observed on a given date since a weather station was established, which is typically 60 to 120 years ago, depending on the station.) For perspective, there were more record highs set in the 50 U.S. states during the first 18 days of March than in the entire three months of meteorological winter. That period (December, January, and February) was itself the fourth warmest in U.S. weather history for the 48 contiguous states.

Temperatures that leap ahead of April

Amazingly, several major cities in eastern Canada soared to warmer readings over the last couple of days than they’d ever before observed in either March or April. This includes St. John, New Brunswick (25.4°C or 77.7°F on the 21st); Charlottetown, Prince Edward Island (24.5°C or 76.1°F on the 22nd); and Halifax, Nova Scotia (27.2°C or 81.0°F on the 22nd). Several locations in Michigan fell just short of such all-time March/April highs, including Flint, Sault St. Marie, and Traverse City.

It’s one thing to set a daily record; it’s another to set a whole string of them. Often the conditions that lead to a record can only maintain themselves for a day or two. But the Great Warm Wave brought more than a week of record-setting air to a large part of the Midwest. Chicago broke or tied its record high on nine consecutive days (3/14 to 3/22), hitting at least 80°F on seven of those days. Only one April has ever had that many 80°F readings in Chicago, never mind in March. And International Falls, Minnesota—the “icebox of the nation”— thawed out with record highs broken or tied on every day except one from 3/10 to 3/22. A newer weather station will set plenty of records simply by virtue of its skimpy data set, but few if any U.S. weather stations with a century or more of data, such as Chicago or International Falls, experienced so many consecutive records before the Great Warm Wave struck.

In a month of disorienting warmth, the honor for the single toastiest temperature I could find goes to Winner, South Dakota. The mercury jumped to 94°F on March 18, which was the earliest 90° reading ever observed in the northern Great Plains—so early, in fact, that it preceded the first day of spring.
* Update | 24 March: The 94°F reading, released in preliminary NWS products, came from an automated station at Winner. However, other observers in Winner and elsewhere reported temperatures in the upper 80s. According to forecasters at the Rapid City NWS office, as well as South Dakota state climatologist Dennis Todey, it appears that the actual high in Winner on March 18 was 87°F—still an impressive reading for mid-March in the northern Plains.
* Update | 18 May: After reviewing all available data, the NWS office in Rapid City has concluded that the official high for Winner on March 18 was 90°F, which secures its place as the record holder for the earliest 90°F reading in the region.

You know it’s a very mild 24-hour period when the temperature can’t even get below the record high for the date. This happened in Rochester, Minnesota (low of 62°F on the 18th; previous record high was 60°F) and Mount Washington, New Hampshire (low of 44°F on the 21st; previous record high was 43°F) as well as Marquette, Michigan, and International Falls. It’s the first time that veteran weather watchers such as Jeff Masters have ever seen such an event happen even once.

One of the main reasons why the Great Lakes were the epicenter of the recent warmth is that the region’s snow and ice cover, which normally persists well into spring, was virtually gone. This allowed energy from the increasing sunlight of March to go into heating the ground and air, rather than melting snow and ice. The quick departure of an already-skimpy snowpack is evident on mid-March satellite images (see left). As for ice, this year only about 5% of the Great Lakes experienced ice cover, compared to about 40% in a typical winter, and water temperatures have climbed to record levels, already warming above 50°F in parts of four of the five lakes. Overall, ice cover on the Great Lakes has diminished by 71% since the 1970s, according to a recent paper in the Journal of Climate led by NOAA’s Jia Wang.

From Minnesota down to Georgia

While the warm wave’s intensity peaked in the northern states and Canada, it’s been unusually balmy in the South as well. Along with record-setting pollen counts, Atlanta experienced a solid week of highs in the 80s (from 3/14 to 3/20). That was its longest string of consecutive 80-degree days ever observed in March, beating the old record of five.

Humidity as well as heat

In some areas, the record warmth had a muggy edge to it. The flow of air from the Gulf of Mexico brought atmospheric moisture over parts of the Plains and Midwest to unprecedented levels for March. In both Rochester, Minnesota, and La Crosse, Wisconsin, it was the first time that a dew point temperature of 62° had ever been recorded before April. That dew point corresponds to enough moisture to produce 100% humidity at an air temperature of 62°F. On the plus side, the moisture helped produce heavy, drought-quenching rains of six inches or more across parts of Oklahoma and nearby states.

A test case for climate change

The last few months haven’t been as extremely mild everywhere. Alaska has had one of its coldest winters on record, and on a global level, the period from December to February was only the 22nd warmest in 133 years of record keeping. Yet the intensity of the Great Warm Wave brings to mind other recent events, including the unprecedented heat last summer in Texas and the 2010 heat wave in Russia. What’s the role of global warming in goosing these events? To some extent, it depends on how you pose the question, as explained in our recent article on extreme weather forensics. Climate change can be seen as the straw breaking the camel’s back, or as just one straw among many on that same camel’s back. In any case, the scope and intensity of the Great Warm Wave should make it a superb case for event attribution research—the growing field in which a particular weather event is examined for the fingerprints of climate change.