“Smart cars” are poised to keep us safer on the road

June 1, 2012  •  Driving: It’s many people’s least favorite aspect of winter. Whether it’s navigating roads covered in fresh snow or skidding on insidious black ice, winter transportation can be a white-knuckle experience. And whatever the season, even Siri, Apple’s personal digital assistant, can’t warn you that there’s a patch of fog lurking around the bend.

Adverse weather is a factor in more than 1.5 million U.S. road accidents each year, resulting in more than 7,000 deaths. A prototype system being developed at NCAR could help reduce that toll by pooling and processing data gathered by weather-smart vehicles. (©UCAR. Photo by Carlye Calvin. This image is freely available for media & nonprofit use.)

In the future, however, a similar sort of digital intelligence may remove some of the stress factor from driving in dangerous conditions. NCAR scientists are developing a system in which wireless-enabled vehicles transmit automated updates about weather and road conditions to a central database, which then relays alerts to other drivers in the area.

The goal is to reduce crashes, injuries, and deaths by giving drivers information about nearby hazards.

“What you really want to know isn’t just the general weather conditions in the 20-mile zone around you—you want to know what’s going on at the next street corner. And should you go left or right at the light,” says NCAR scientist Sheldon Drobot. “This system will tell drivers what they can expect to run into in the next few seconds and minutes, giving them a critical chance to slow down or take other action.”

The prototype system, which is called the Vehicle Data Translator, is sponsored by the U.S. Department of Transportation’s Research and Innovative Technology Administration and Road Weather Management Program. 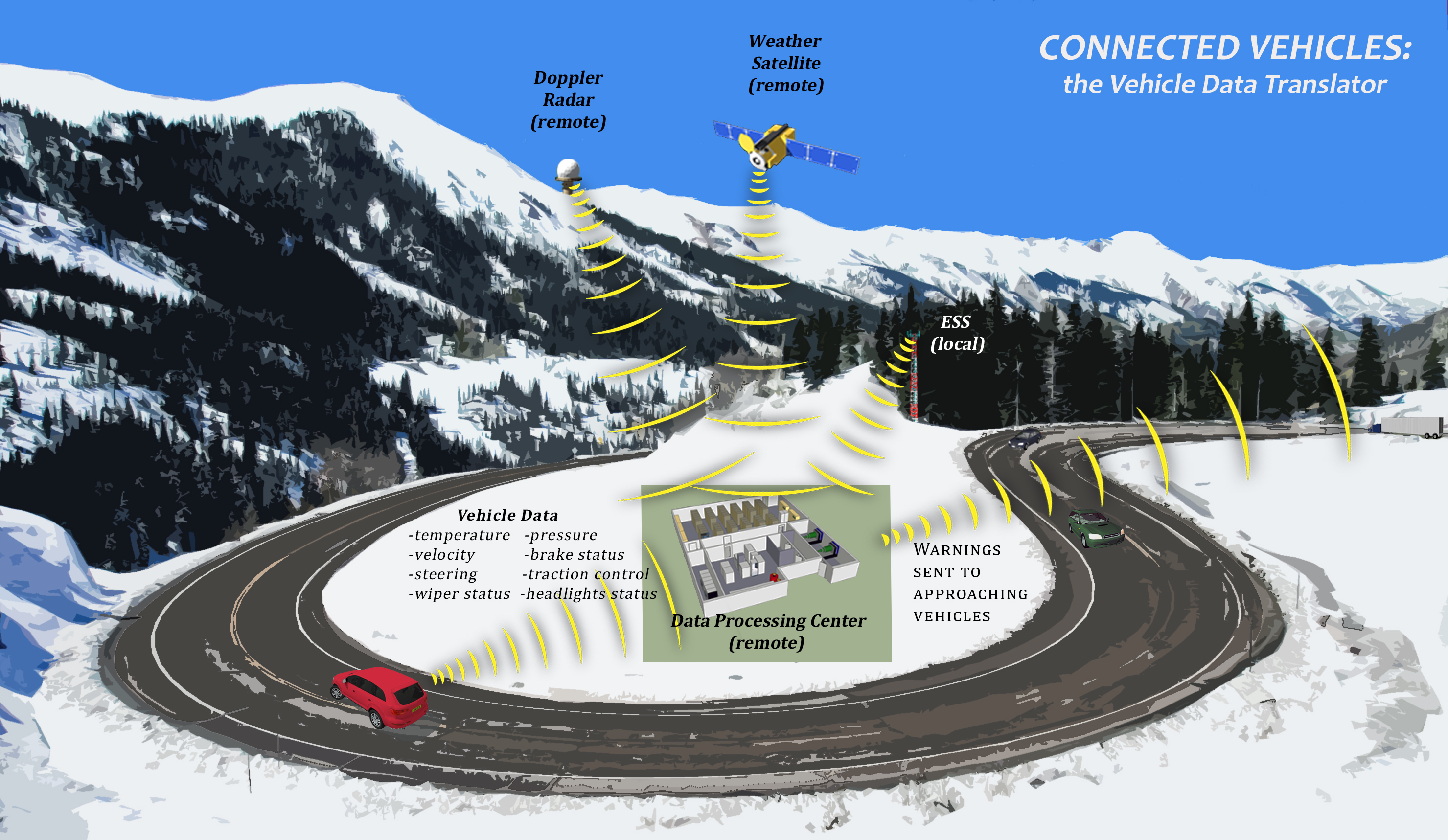 The prototype Vehicle Data Translator aims to improve driving safety by warning motorists about nearby hazards. Information about adverse conditions would be automatically transmitted from vehicles to a remote data processing system. The system would incorporate weather information from other sources, including radars and satellites, and then send alerts to drivers in the area. (©UCAR. Illustration by Lex Ivey. This image is freely available for media & nonprofit use.*)

Onboard equipment collects weather data, such as temperature, and indirect indications of road conditions, such as the activation of antilock brakes. This information is transmitted to a central database, where it is integrated with other local weather data and traffic observations, along with details about the road’s surface material. Incoming data will be anonymous to protect the privacy of drivers.

The processed data would then be used to warn motorists about upcoming hazards and even suggest alternate routes. The system would also alert emergency managers to hazardous driving conditions and help road crews clear snow more efficiently.

NCAR researchers Sheldon Drobot, Michael Chapman, and Brice Lambi install a sensor in a vehicle as part of testing for the Vehicle Data Translator system. (©UCAR. Photo by Carlye Calvin. This image is freely available for media & nonprofit use.*)

In 2009, Drobot’s team first tested the system in the Detroit area, where drivers in 11 cars equipped with sensors sought out adverse winter road conditions. The researchers analyzed the reliability of the system by comparing data from the cars with weather observations from radars and satellites. They used this information to build the algorithms, or mathematical formulas, underlying the Vehicle Data Translator system.

This past winter, the team took the project to Minnesota and Nevada, outfitting Department of Transportation snowplows and supervisor trucks with sensors. Eighty vehicles in Minnesota and 16 in Nevada measured temperature, pressure, humidity, and other weather variables as the drivers went about their routine jobs. The researchers will use the data to continue to develop the software, in hopes of having a system ready for operational field testing by winter 2012–13.

Next year, the National Highway Traffic Safety Administration plans to use the results of these pilot tests to aid in determining whether the technology is mature enough to encourage vehicle manufacturers to include the equipment in new passenger vehicles.

The system would then be made available to private vendors, according to Drobot. “We have a long history of transferring technology to public use. We want to see our efforts implemented in the real world,” he says.