A wind energy forecasting system created by NCAR's Research Applications Laboratory has already saved Xcel Energy as much as $6 million in a single year. Now a new forecasting aid opens up the possibility of even more detailed and accurate short-term wind forecasts, potentially further increasing the efficiency of wind energy production.

That tool is called VDRAS, the Variational Doppler Radar Analysis System. Created by NCAR scientist Jenny Sun and colleagues, VDRAS relies on data assimilation, a technique for combining real-world observations and computer model output to create a more accurate forecast. It can provide utilities with a day’s advance notice of a “ramp event”—a major change in winds for a few hours due to a passing front or another atmospheric event. The advance notice enables utilities to plan their use of gas-powered turbines or other facilities, switching them on or off as needed. 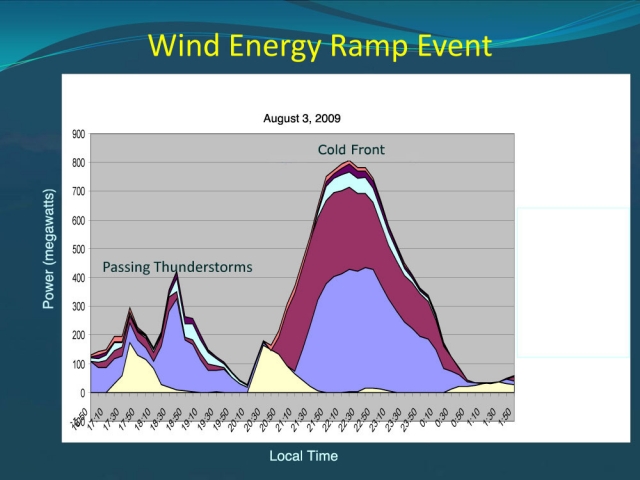 Changes in weather can have significant impacts on wind energy production. This graphic shows how passing thunderstorms and a cold front generated an 800-megawatt jump in energy production over the course of just four hours. (Image courtesy Sue Ellen Haupt, NCAR.)

VDRAS has a very fast update cycle, providing new data from real-time radar and other sources for assimilation every 6–12 minutes. The mathematical technique it relies on, called 4DVar (Four-Dimensional Variational), is the gold standard for the field of data assimilation. The system uses freely available observations from the National Weather Service's Doppler radar network, so it can be run anywhere in the country without requiring new and costly instrumentation.

Like the system created for Xcel, VDRAS works with these two other NCAR-based tools: the advanced research version of the Weather Research and Forecasting model, which generates very detailed predictions of areas as small as 3 kilometers (1.8 miles) square; and the Dynamic Integrated ForeCast system, which fine-tunes and optimizes the ongoing forecast.

VDRAS is currently running at about 10 locations in the U.S. and abroad for forecasters at several federal agencies. NCAR 's Sue Haupt, the scientific program manager for the Xcel project, is encouraged by experimental results with that system. “The preliminary study showed that it's going to make a big impact on very short term forecasts for wind power,” she says.