BOULDER—For airline passengers who dread bumpy rides to mountainous destinations, help may be on the way. A new turbulence avoidance system has for the first time been approved for use at a U.S. airport and can be adapted for additional airports in rugged settings across the United States and overseas. 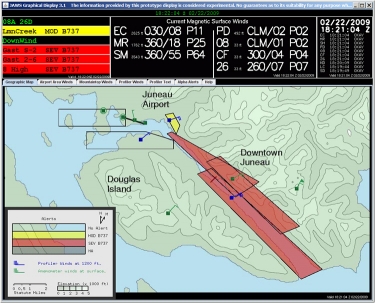 The system, developed by the National Center for Atmospheric Research (NCAR), provides information pilots can use to route aircraft away from patches of potentially dangerous turbulence. It uses a network of wind measuring instruments and computational formulas to interpret rapidly changing atmospheric conditions.

The Federal Aviation Administration formally commissioned the system in July for Alaska’s Juneau International Airport. NCAR researchers can now turn their attention to adapting the system to other airports that often have notoriously severe turbulence, in areas ranging from southern California and the Mountain West to Norway and New Zealand.

The Juneau system was patterned after a similar system, also designed by NCAR, that has guided aircraft for several years at Hong Kong’s heavily trafficked Chek Lap Kok Airport.

“By alerting pilots to areas of moderate and severe turbulence, this system enables them to fly more frequently and safely in and out of the Juneau airport in poor weather,” says Alan Yates, an NCAR program manager who helped oversee the system’s development. “It allows pilots to plan better routes, helping to reduce the bumpy rides that passengers have come to associate with airports in these mountainous settings.”

The system offers the potential to substantially reduce flight delays. In Alaska’s capital city, where it is known as the Juneau Airport Wind System or JAWS, it enables the airport to continue operations even during times of turbulence by highlighting corridors of smooth air for safe take-offs and landings. 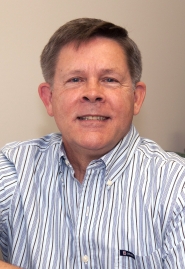 Al Yates (©UCAR. Photo by Carlye Calvin. This image is freely available for media & nonprofit use.)

“The JAWS system has nearly eliminated all the risk of flying in and out of Juneau,” says Ken Williams, a Boeing 737 captain and instructor pilot with Alaska Airlines. “I wish the system would be deployed in other airports where there are frequent encounters with significant turbulence, so pilots can get a true understanding of what the actual winds are doing on the surrounding mountainous terrain as you approach or depart.”

The project was funded by the Federal Aviation Administration. NCAR is sponsored by the National Science Foundation.

Turbulence has long been a serious concern for pilots approaching and departing airports in steep terrain. Rugged peaks can break up air masses and cause complex and rapidly changing patterns of updrafts and downdrafts, buffeting an aircraft or even causing it to unexpectedly leave its planned flight path.

In Juneau, after several turbulence-related incidents in the early 1990s—including one in which a jet was flipped on its side during flight and narrowly avoided an accident—the FAA imposed strict rules of operation that effectively shut down the airport during times of atmospheric disturbance. The agency then asked NCAR to develop a system that would allow pilots to avoid regions of turbulence. Otherwise, Alaska’s capital would be isolated at many times from the rest of the state, since the only way to travel in and out of Juneau is by airplane or boat.

The NCAR team used research aircraft and computer simulations to determine how different wind patterns—such as winds that come from the north over mountains and glaciers and winds that come from the southeast over water—correlated with specific areas of turbulence near the airport. To do this they installed anemometers and wind profilers at key sites along the coast and on mountain ridges. The team has installed ruggedized, heated instruments that can keep functioning even when exposed to extreme cold, wind, and heavy icing conditions.

The Federal Aviation Administration accepted JAWS for operational use this year.

The five anemometer sites and three wind profiler sites around the airport transmit data multiple times every minute. Pilots can get near-real-time information about wind speed and direction, and a visual readout showing regions of moderate and severe turbulence in the airport’s approach and departure corridors, from the FAA’s Flight Service Station or online at a National Weather Service website, where an integrated display "app" is also available for download.

“Juneau was an extremely challenging case, and we’re pleased that the new system met the FAA’s high standards,” Yates says. “We look forward to exploring opportunities to support development of turbulence avoidance systems at additional airports. Our goal is to improve flying safety and comfort for millions of passengers.”