BOULDER—The National Center for Atmospheric Research is developing a prototype system to provide aircraft with updates about severe storms and turbulence as they fly across remote ocean regions. The system is designed to help guide pilots away from intense weather, such as the thunderstorms that Air France Flight 447 apparently encountered before crashing into the Atlantic Ocean on June 1.

The NCAR system, being developed with funding from NASA, combines satellite data and computer weather models with cutting-edge artificial intelligence techniques to identify and predict rapidly evolving storms and other potential areas of turbulence. The system is based on products that NCAR has developed to alert pilots and air traffic controllers about storms and turbulence over the continental United States. 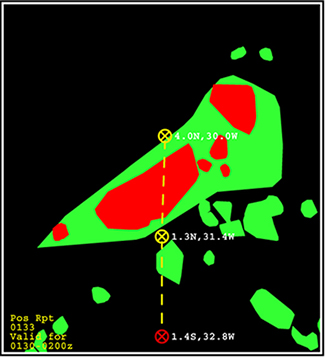 These two maps, based on an NCAR analysis of satellite data after the event, show the heights of storm clouds--which often correlate with storm intensity--along the flight path of Air France Flight 447. Each map shows the same information, including flight path with waypoint coordinates (latitude and longitude), cloud tops at 30,000 to 40,000 feet (green or "/"), and cloud tops above 40,000 feet (red or "C").

Although flights crossing the oceans do not currently receive this type of information, NCAR has created a prototype system to generate such graphical (above) and text-based displays (below). They are designed to be provided to pilots via uplink to the cockpit on an experimental basis. Over the next two years, NCAR is developing a more sophisticated system that will identify areas of likely turbulence in storms and in clear air for use by pilots and air traffic controllers. 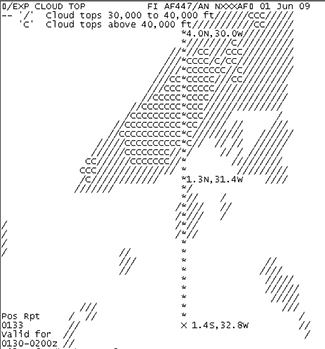 See above for a description of this text-based display for cockpit printers. [ENLARGE] (©UCAR, images by Gary Blackburn, Cathy Kessinger, and John  Williams, NCAR.) News media terms of use*

"Pilots currently have little weather information as they fly over remote stretches of the ocean, which is where some of the worst turbulence encounters occur," says NCAR scientist John Williams, one of the project leads. "Providing pilots with at least an approximate picture of developing storms could help guide them safely around areas of potentially severe turbulence."

The component of the system that identifies major storms over the ocean is already available for aircraft use on an experimental basis.

The entire prototype system, which will identify areas of turbulence in clear air as well as within storms, is on track for testing next year. Pilots on selected transoceanic routes will receive real-time turbulence updates and then provide feedback on the system to NCAR. The researchers will adjust the system as needed.

When the system is finalized in about two years, it will provide pilots and ground-based controllers with text-based maps and graphical displays showing likely regions of turbulence and of storms.

In addition to NCAR, other organizations taking part in the research include the Massachusetts Institute of Technology's Lincoln Laboratory, the Naval Research Laboratory, and the University of Wisconsin-Madison.

Pinpointing turbulence over the oceans is far more challenging than over land because of sparse observations. Weather satellites are often the only source of information over these remote regions. But the satellites provide images less frequently in general than over land, which can make it difficult to capture fast-changing conditions, and they do not directly measure turbulence.

All this information, however, is of limited value. Thunderstorms may develop quickly and move rapidly, rendering the briefings and weather updates obsolete. Onboard radars are designed to detect clouds and precipitation, but turbulence is often located far from the most intense precipitation. As a result, pilots often must choose between detouring hundreds of miles around potentially stormy areas or taking a chance and flying directly through a region that may or may not contain intense weather.

In contrast, NCAR provides real-time maps of turbulence at various altitudes over the continental United States. Such a system, had it encompassed remote ocean regions, could have alerted the pilots of the doomed Air France flight to the stormy conditions along their flight path. The cause of that disaster has not been determined, and it is impossible to know whether the system could have prevented it.

"It seems likely that the information provided by a real-time uplink of weather conditions ahead would have, at a minimum, improved the pilots' situational awareness," Williams says.

Williams and his colleagues have recently completed two critical steps in identifying turbulence over the oceans: 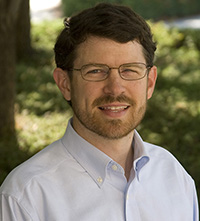 The next step is to identify areas of possible turbulence within and around intense storms. To do so, the team will study correlations between storms and turbulence over the continental United States where weather is more closely observed. The scientists will then infer the likelihood of turbulence associated with storms over the oceans, keying in on satellite indicators such as rapidly expanding clouds or places where the tops of storm clouds are cooling quickly.

They will also develop mathematical equations to account for differences in cloud systems over the United States compared to over the oceans, including the tropics.

In addition to providing aircraft and ground controllers with up-to-the-minute maps of turbulence, the NCAR team is turning to an artificial intelligence technique, known as "random forests," to provide short-term forecasts of turbulence. The random forests, which have proven useful for forecasting thunderstorms over land, consist of many decision trees that each cast a yes-or-no "vote" on crucial elements of a storm at future points in time and space. This enables scientists to forecast the movement and strength of the storm over the next few hours.

"Our goal is to give pilots a regularly updated picture of the likely storms ahead as they fly over the ocean so they can take action to minimize turbulence and keep their aircraft out of danger," explains NCAR scientist Cathy Kessinger, a project team member. "Even over the middle of the ocean, where we don't have land-based radars or other tools to observe storms in detail, we can still inform pilots about the potential for violent downdrafts, turbulence, and possibly lightning."