BOULDER—Close to 9 out of 10 adult Americans obtain weather forecasts regularly, and they do so more than three times each day on average, a new nationwide survey by scientists at the National Center for Atmospheric Research (NCAR) has found. The value Americans place on these forecasts appears to be far more than the nation spends on public and private weather services.

The research is the first comprehensive study of its kind to examine how the public perceives, uses, and values weather forecasts. Funded by the National Science Foundation, NCAR's sponsor, and the National Oceanic and Atmospheric Administration, the study appears in the June issue of the Bulletin of the American Meteorological Society.

U.S. adults obtain an estimated 300 billion forecasts each year, says NCAR scientist and lead author Jeffrey Lazo. The study also reveals that most people are generally satisfied with weather forecasts and have fairly high confidence in forecasts with a lead time of one to two days. 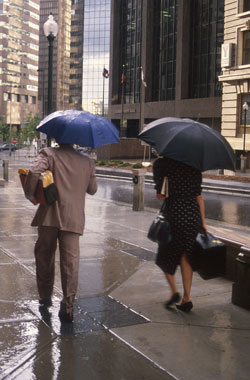 Consulting a weather forecast can help avoid the surprise of a rain storm. [ENLARGE] ©UCAR News media terms of use*

"Weather forecasts equate to an enormous volume and multiplicity of information, when you account for the array of forecast providers, communication channels, and the size and diversity of the U.S. population," Lazo says.

Understanding how individuals use day-to-day weather information can help direct the development of more relevant and valuable weather forecasts and warnings by providers like the National Weather Service, he adds.

Gaining a better understanding of people's attitudes and behaviors toward forecasts also provides valuable information to forecasters and emergency managers.

More than three forecasts a day

The Internet-based survey, conducted in November 2006, collected information about respondents' weather-related activities and experiences, as well as basic demographic information. Of the 1,520 individuals surveyed, 1,465 (96 percent) said they used weather forecasts.

Although the number of forecasts a person obtains varies significantly from day to day, depending on factors like weather events and planned activities, the researchers found that on average survey participants received forecasts 3.8 times a day. These findings, when extrapolated to the total U.S. adult population of 226 million, indicate that Americans receive a yearly total of about 300 billion forecasts.

The authors cautioned that it is difficult to put a dollar figure on the value of forecasts. However, the researchers asked respondents what they believed forecasts to be worth, presenting them with hypothetical amounts that they were currently paying in taxes and asking if they felt that value was correct, worth more, or worth less than the amount indicated.

Respondents indicated that, on a per-household basis, they would place an average value of about 10.5 cents on every forecast obtained. This equates to an annual value of $31.5 billion. In comparison, the cost of providing forecasts by government agencies and private companies is $5.1 billion, according to the paper.

"Our estimates indicate that Americans are getting a good deal on weather forecasts," says Lazo. "While it's hard to precisely estimate the value of the forecasts, it is clear that there is a significant difference between the cost of forecasts and the value that people place on them." 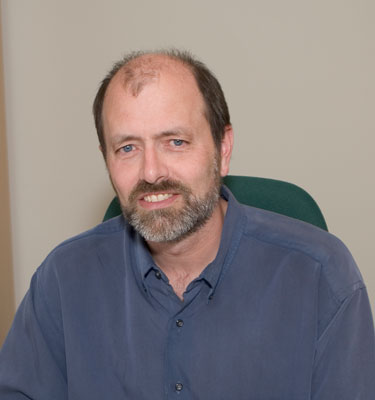 Fascination with the weather

Coauthor Julie Demuth, an NCAR associate scientist, says the study also reveals people's curiosity about the weather, with 85 percent of respondents saying that more than half the time they obtain forecasts simply to know what the weather will be like.

"This tells us that people generally have a high level of interest in weather forecasts, regardless of whether they are using this information directly for planning and decision making," says Demuth.

The most common source for forecast information is local television stations, with individuals obtaining forecasts 33.7 times per month on average. Cable television and radio are the next most popular sources. Web pages and newspapers were less common sources overall, but both are a daily or more frequent source of forecasts for 27 percent of respondents.

"We should be doing this type of survey every two to three years so we can see what changes are happening, particularly in how people are using technology like mobile phones and the Internet to receive forecasts," says Lazo.