BOULDER—The threat of global warming can still be greatly diminished if nations cut emissions of heat-trapping greenhouse gases by 70 percent this century, according to a new analysis. While global temperatures would rise, the most dangerous potential aspects of climate change, including massive losses of Arctic sea ice and permafrost and significant sea level rise, could be partially avoided.

The study, led by scientists at the National Center for Atmospheric Research (NCAR), will be published next week in Geophysical Research Letters. It was funded by the Department of Energy and the National Science Foundation, NCAR's sponsor.

"This research indicates that we can no longer avoid significant warming during this century," says NCAR scientist Warren Washington, the lead author. "But if the world were to implement this level of emission cuts, we could stabilize the threat of climate change and avoid catastrophe." 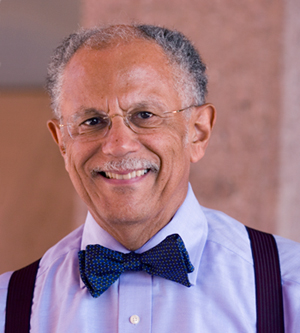 Average global temperatures have warmed by close to 1 degree Celsius (almost 1.8 degrees Fahrenheit) since the pre-industrial era. Much of the warming is due to human-produced emissions of greenhouse gases, predominantly carbon dioxide. This heat-trapping gas has increased from a pre-industrial level of about 284 parts per million (ppm) in the atmosphere to more than 380 ppm today.

With research showing that additional warming of about 1 degree C (1.8 degrees F) may be the threshold for dangerous climate change, the European Union has called for dramatic cuts in emissions of carbon dioxide and other greenhouse gases. The U.S. Congress is also debating the issue.

To examine the impact of such cuts on the world's climate, Washington and his colleagues ran a series of global supercomputer studies with the NCAR-based Community Climate System Model. They assumed that carbon dioxide levels could be held to 450 ppm at the end of this century. That figure comes from the U.S. Climate Change Science Program, which has cited 450 ppm as an attainable target if the world quickly adapts conservation practices and new green technologies to cut emissions dramatically. In contrast, emissions are now on track to reach about 750 ppm by 2100 if unchecked.

The team's results showed that if carbon dioxide were held to 450 ppm, global temperatures would increase by 0.6 degrees C (about 1 degree F) above current readings by the end of the century. In contrast, the study showed that temperatures would rise by almost four times that amount, to 2.2 degrees C (4 degrees F) above current readings, if emissions were allowed to continue on their present course. 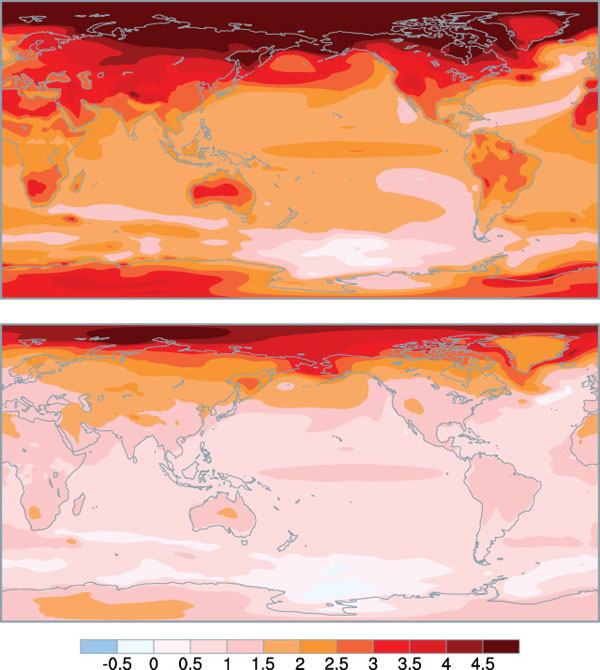 New computer simulations show the extent that average air temperatures at Earth's surface could warm by 2080-2099 compared to 1980-1999, if (top) greenhouse gases emissions continue to climb at current rates, or if (bottom) society cuts emissions by 70 percent. In the latter case, temperatures rise by less than 2°C (3.6°F) across nearly all of Earth's populated areas. However, unchecked emissions could lead to warming of 3°C (5.4°F) or more across parts of Europe, Asia, North America, and Australia. [ENLARGE] (Graphic courtesy Geophysical Research Letters, modified by UCAR.) News media terms of use*

Holding carbon dioxide levels to 450 ppm would have other impacts, according to the climate modeling study:

The research team used supercomputer simulations to compare a business-as-usual scenario to one with dramatic cuts in carbon dioxide emissions beginning in about a decade. The authors stressed that they were not studying how such cuts could be achieved nor advocating a particular policy.

"Our goal is to provide policymakers with appropriate research so they can make informed decisions," Washington says. "This study provides some hope that we can avoid the worst impacts of climate change--if society can cut emissions substantially over the next several decades and continue major cuts through the century."

Title: "How Much Climate Change Can Be Avoided by Mitigation?"