NCAR tests system to steer drivers away from dangerous weather

BOULDER—Scientists at the National Center for Atmospheric Research (NCAR) are testing an innovative technological system in the Detroit area this month that ultimately will help protect drivers from being surprised by black ice, fog, and other hazardous weather conditions.

The prototype system is designed to gather detailed information about weather and road conditions from moving vehicles. Within about a decade, it should enable motor vehicles equipped with wireless technology to transmit automated updates about local conditions to a central database, which will then relay alerts to other drivers in the area. 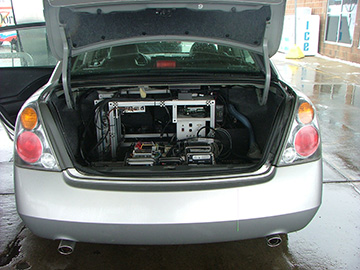 Each of the test cars driving around Detroit contains onboard equipment that collects, stores, and transmits weather data. In the future, such onboard equipment will be much smaller and integrated into the car design instead of taking up trunk space. [ENLARGE] (©UCAR, photo by Michael Chapman.) News media terms of use*

"The goal is to reduce crashes, injuries, and deaths by getting drivers the information they need about nearby hazards," says Sheldon Drobot, the NCAR program manager in charge of the project. "The system will tell drivers what they can expect to run into in the next few seconds and minutes, giving them a critical chance to slow down or take other action."

NCAR's road weather system is part of IntelliDriveSM, a national initiative overseen by the Department of Transportation (DOT) to use new technologies to make driving safer and improve mobility. Officials envision that, over the next 10 years or so, motor vehicles will begin to automatically communicate with each other and central databases, alerting drivers to threats that range from adverse road conditions to nearby vehicles that are moving erratically or running through a red light. The goal of the DOT is to reduce motor vehicle accidents by 90 percent by 2030.

An estimated 1.5 million motor vehicle accidents annually are associated with poor weather, resulting in about 7,400 deaths and 690,000 injuries, according to a 2004 National Research Council report, Where the Weather Meets the Road. The report called for improving safety by establishing a nationwide observation system to monitor weather conditions along roads and warn drivers about potential hazards.

For the road weather portion of IntelliDrive, vehicles will use sensors to measure atmospheric conditions such as temperature, pressure, and humidity. An onboard digital memory device will record that information, along with indirect signs of road conditions, such as windshield wipers being switched on or activation of the antilock braking system. 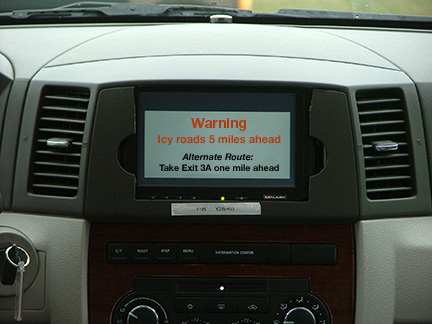 This composite image simulates the type of visual alert that a driver might receive from the road warning system being tested by NCAR. (©UCAR, photomontage by Michael Chapman and Carlye Calvin.)

The information will be transmitted to a central database, where it will be integrated with other local weather data and traffic observations, as well as details about road material and alignment. The processed data will then be used to update motorists in the area when hazards are present and, when appropriate, suggest alternate routes.

The incoming data would be anonymous. Officials are working on guidelines to allow drivers to opt out of the system for privacy considerations.

In addition to providing motorist warnings, such a system will alert emergency managers to hazardous driving conditions and enable state highway departments to efficiently keep roads clear of snow. It can also help meteorologists refine their forecasts by providing them with continual updates about local weather conditions.

Motor vehicle manufacturers plan to install the onboard equipment in every new vehicle sold in the United States within a few years as part of a voluntary program to improve driving safety.

On the prowl for bad weather

NCAR scientists and engineers are testing the weather piece of the system by collecting information from 11 specially equipped cars in the Detroit area. Test drivers are on the prowl for adverse conditions, especially heavy rain and snow. Engineers will analyze the reliability of the system by comparing data from the cars with other observations from radars and weather satellites. They will also look at whether different models of cars—in this case, Jeep Cherokees, Ford Edges, and a Nissan Altima—produce comparable measurements of weather and road conditions. 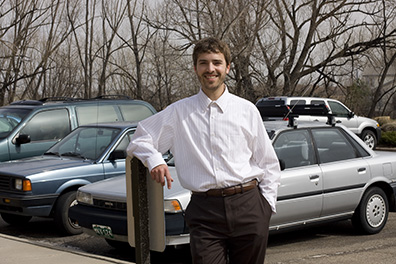 The tests, which began early this month and will run for about two weeks, will help the NCAR team refine its software to accurately process data from motor vehicles. In the future, the team also hopes to study which types of weather information will be most useful and how that information can be clearly and safely communicated to drivers, possibly through a visual display or audio alert.

Processing a deluge of observations

One of the biggest challenges for NCAR is to determine how to process the enormous amounts of data that could be generated by about 300 million motor vehicles. The center has worked with the Department of Defense, the aviation industry, and other organizations to analyze complex weather observations. But the new system incorporates information from far more sources, and those sources are moving.

NCAR engineers are developing mathematical formulas and other techniques to accurately interpret the information and eliminate misleading indicators. If a driver, for example, turns on the windshield wipers in clear weather to clean the windshield, the NCAR data system will identify that action as an outlier rather than issuing a false alert about precipitation.

"It's not enough to process the information almost instantaneously," says William Mahoney, who oversees the system's development for NCAR. "It needs to be cleaned up, sent through a quality control process, blended with traditional weather data, and eventually delivered back to drivers who are counting on the system to accurately guide them through potentially dangerous conditions."

IntelliDrive is a service mark of the U.S. Department of Transportation.