BOULDER—A team of scientists has successfully flown from the Arctic to the Antarctic this month aboard an advanced research aircraft, the first step in a three-year project to make the most extensive airborne measurements of carbon dioxide and other greenhouse gases to date. The findings will help scientists determine where and when greenhouse gases enter and leave the atmosphere, a critical prerequisite for taking steps to curb global warming.

"This mission is providing us with amazing data about carbon dioxide and other greenhouse gases from all over the world," says Britton Stephens, a scientist with the National Center for Atmospheric Research (NCAR) and one of the project's co-principal investigators. "This will lead to improved predictions about greenhouse gases and enable society to make better decisions about climate change." 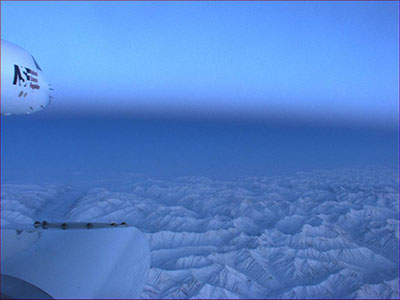 This photo of the Arctic was taken from the HIAPER aircraft during the HIPPO mission. HIAPER is also known as the NSF/NCAR G-V. [ENLARGE] (©UCAR.) See more photos and video in the HIPPO Multimedia Gallery. News media terms of use*

The three-year campaign relies on the powerful capabilities of a specially equipped Gulfstream V aircraft, owned by the National Science Foundation (NSF) and operated by NCAR. The research jet, known as the High-performance Instrumented Airborne Platform for Environmental Research (HIAPER), has a range of about 7,000 miles (11,000 kilometers), which allows scientists to traverse large regions of the Pacific Ocean without refueling, gathering air samples along the way. Researchers will take the jet from an altitude of 1,000 feet (300 meters) above Earth's surface up to as high as 47,000 feet (14,000 meters), into the lower stratosphere.

The project, HIAPER Pole-to-Pole Observations (HIPPO), brings together scientists from organizations across the nation, including NCAR, Harvard University, the National Oceanic and Atmospheric Administration (NOAA), the Scripps Institution of Oceanography, the University of Miami, and Princeton University. NSF and NOAA are funding the project.

The scientists departed January 8 on the first of five missions. Their flights took them from Colorado to Alaska and the Arctic Circle, then south to New Zealand and Antarctica. Later this week, the jet will return from Easter Island to Colorado. 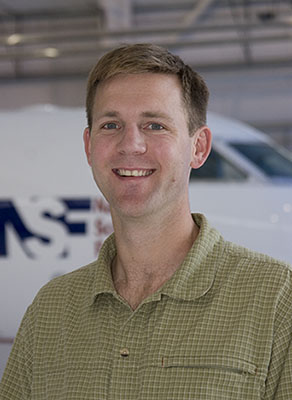 The four subsequent missions through mid-2011 will follow similar flight paths, but at different times of year, resulting in a range of seasonal snapshots of concentrations of greenhouse gases. The research will help answer such questions as why atmospheric levels of methane, a potent greenhouse gas, have tripled since the Industrial Age and are on the rise again after leveling off in the 1990s. Scientists will also analyze other gases and particles in the atmosphere that can affect temperatures by influencing clouds or the amount of solar heat that reaches Earth's surface.

"We're flying this wonderful plane all over the globe and taking a slice out of the atmosphere to see what's in it," says principal investigator Steven Wofsy of Harvard. "It's the first time we'll be able to see the whole globe all at once in great detail. This is giving us a completely new picture of how greenhouse gases are entering the atmosphere and being removed from it, both by natural processes and by humans."

"This is the first time that anyone has systematically tried to map the distribution of carbon dioxide and related gases from the Arctic to the Antarctic and from the surface to the upper atmosphere," says Ralph Keeling of Scripps, another co-principal investigator. "Oceanographers have been doing similar mapping of the ocean for decades. But for the atmosphere, the approach is revolutionary. Each day we get a snapshot of another piece of the world. We are assembling a global picture, flight by flight."

One of the major challenges in climate science is tracking the approximately 30 billion tons of carbon emitted each year from motor vehicles, factories, deforestation, and other sources. About 40 percent of this invisible gas accumulates in the atmosphere, with the rest apparently being absorbed by oceans and terrestrial ecosystems.

Flying from pole to pole will enable the HIPPO team to study how logging and regrowth in northern boreal forests and tropical rain forests, as well as changes in upper atmospheric winds around Antarctica, are affecting levels of carbon dioxide (CO2) in the atmosphere. The research will also provide a baseline against which to evaluate the success of efforts to curb carbon dioxide emissions and enhance natural CO2 uptake and storage.

This task of balancing the "carbon budget" is gaining urgency as the world moves toward agreements to limit greenhouse gases. Some countries or regions could be rewarded with carbon credits for taking steps such as preserving forests believed to absorb carbon dioxide.

"Huge sums of money could exchange hands based on where the carbon appears to be going," NCAR's Stephens says.

Scientists have used ground stations and a few satellites to determine the global average concentration of CO2 in the atmosphere. But ground stations can be separated by thousands of miles, which hinders their ability to measure CO2 in specific locations. And the limited views from satellites do not enable scientists to make regional measurements.

Many of the instruments aboard HIAPER have been designed especially for the HIPPO project. They will enable scientists to measure CO2 and other gases across the planet in real time, instead of collecting a limited number of samples in flasks and bringing them back to the lab for later analysis.

"Essentially, we have a flying laboratory that we're taking around the world, sucking in air and doing the measurements as we go," Stephens says.

"By using the unique capabilities of the research jet, we are gaining tremendous insights into the atmosphere," says Anne-Marie Schmoltner, who is helping to oversee the project as NSF section head for lower atmosphere research. "Scientists who work with computer models will be busy for years using this information to refine our understanding of atmospheric processes and the role of greenhouse gases."