BOULDER—Wildfires can boost ozone pollution to levels that violate U.S. health standards, a new study concludes. The research, by scientists at the National Center for Atmospheric Research (NCAR), focused on California wildfires in 2007, finding that they repeatedly caused ground-level ozone to spike to unhealthy levels across a broad area, including much of rural California as well as neighboring Nevada.

The study was published today in Geophysical Research Letters. It was funded by NASA and by the National Science Foundation, which sponsors NCAR.

"It's important to understand the health impacts of wildfires," says NCAR scientist Gabriele Pfister, the lead author. "Ozone can hit unhealthy levels even in places where people don't see smoke." 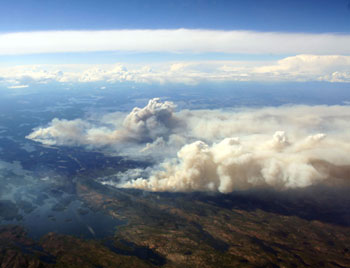 Wildfires, such as this blaze in western Canada last summer, can create unhealthy levels of ozone pollution. [ENLARGE] (Photo by Cameron S. McNaughton.) News media terms of use*

Although scientists have long known that wildfires can affect air quality by emitting particles and gases into the air, there has been little research to quantify the impacts. Fires worsen ozone levels by releasing nitrogen oxides and hydrocarbons, which can form ozone near the fire or far downwind as a result of chemical reactions in sunlight.

The researchers, using a combination of computer models and ground-level measurements, studied intense California wildfires that broke out in September and October of 2007. They found that ozone was three times more likely to violate safe levels when fire plumes blew into a region than when no plumes were present.

At the time of the wildfires, the public health standard for ozone set by the Environmental Protection Agency (EPA) was 0.08 parts per million over an eight-hour period. The EPA has since tightened the standard to 0.075 parts per million. Under the stricter standard, the number of violations would have nearly doubled.

While ozone in the stratosphere benefits life on Earth by blocking ultraviolet radiation from the Sun, ozone in the lower atmosphere can trigger a number of health problems. These range from coughing and throat irritation to more serious problems, such as aggravation of asthma, bronchitis, and emphysema. Ground-level ozone pollution also damages crops and other plants.

"Wildfires are expected to worsen in the future, especially as our climate grows warmer," Pfister says. "But we are only now beginning to understand their potential impacts on people and ecosystems, not only nearby but also potentially far downwind." 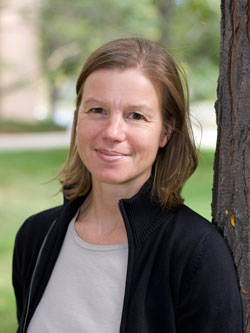 The unhealthy levels of ozone the researchers detected occurred mostly in rural areas. This finding may be a result of the computer modeling, which lacked the fine detail to zoom in on relatively compact urban areas. However, the authors also speculate that wildfire emissions have a greater impact on ozone levels in the countryside than on cities. The reason has to do with chemistry. Cities tend to have more nitrogen dioxide, a pollutant that can, at high levels, reduce the efficiency with which ozone is produced or even destroy ozone.

"The impact of wildfires on ozone in suburban and rural areas, far from urban sources of pollution, was quite noticeable," says NCAR scientist Christine Wiedinmyer, a co-author of the paper.

The paper notes that ozone levels would likely have been even greater except that Santa Ana winds in October blew wildfire plumes over the Pacific Ocean, safely away from populated areas.

To measure the impact of the fires on ozone formation, the researchers turned to a pair of computer models developed at NCAR. With the first one, a specialized fire model, they estimated the amount of vegetation burned and resulting emissions of nitrous oxides, sulfur dioxide, and other pollutants. Those results went into a global air chemistry model that simulated the movement of the emissions and evolving chemistry and tracked the resulting formation of ozone as the fire plumes spread downwind.

The scientists compared their modeling results with ozone measurements from a network of EPA ground stations at various sites in California. This enabled them to determine both the number of ozone violations and the extent to which the wildfires contributed to those violations. It also enabled them to verify the accuracy of the model.