BOULDER—Mountain pine beetles appear to be doing more than killing large swaths of forests in the Rocky Mountains. Scientists suspect they are also altering local weather patterns and air quality.

A new international field project, led by scientists at the National Center for Atmospheric Research (NCAR), is exploring how trees and other vegetation influence rainfall, temperatures, smog, and other aspects of the atmosphere. Plants take in and emit chemicals that affect the air, and they also absorb varying amounts of incoming heat from the Sun. When portions of a forest die, the local atmosphere can change in subtle ways.

"Forests help control the atmosphere, and there's a big difference between the impacts of a living forest and a dead forest," says NCAR scientist Alex Guenther, a principal investigator on the project. "With a dead forest, we may get different rainfall patterns, for example." 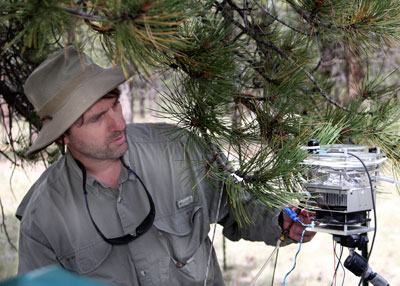 NCAR scientist Alex Guenther examines an instrument at a field site in a Colorado forest. [ENLARGE] (©UCAR, photo by Carlye Calvin.) News media terms of use*

Launched this summer, the field project is scheduled to continue for four years over a region extending from southern Wyoming to northern New Mexico. Scientists plan to use aircraft and ground-based instruments, as well as computer models, to study interactions between the planet's surface and the atmosphere.

The project is known as BEACHON. (It is pronounced "beacon" and stands for Bio-hydro-atmosphere Interactions of Energy, Aerosols, Carbon, H2O, Organics, and Nitrogen.) It is funded by the National Science Foundation, NCAR's sponsor. Organizations participating in the project include Colorado College, Colorado State University, Cornell University, Texas A&M University, and the universities of Colorado, Idaho, Minnesota, New Hampshire, and Washington, as well as the U.S. Forest Service, the Environmental Protection Agency, and universities in Austria, France, and Japan.

The impacts of vegetation

BEACHON will allow scientists to glean insights into such topics as cloud formation, climate change, and the cycling of gases and particles between the land and the atmosphere. Plants emit water vapor, other gases, and microscopic particles that influence the atmosphere in subtle and complex ways.

For example, some tiny airborne particles from plants rise into clouds and seed them, providing a surface for water droplets to adhere to and develop into raindrops. Greenhouse gases such as carbon dioxide (CO2), which is emitted in large quantities from beetle-devastated forests, combine with extra CO2 produced by human activities to influence the amount of heat from the Sun that reaches Earth or gets reflected back into space. Plants also emit chemicals known as volatile organic compounds that can interact with human- caused pollution to influence the formation of particles and ground- level ozone, or smog, affecting both air quality and local temperatures. 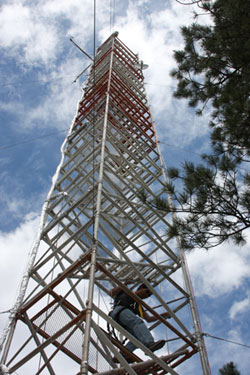 BEACHON researchers use towers that rise above the forest canopy to measure the exchange of gases and particles between plants and the atmosphere. [ENLARGE] (©UCAR, photo by Carlye Calvin.) News media terms of use*

When large areas of trees are killed by pine beetles or other causes, these interactions are disrupted. This may change cloud and precipitation patterns for a decade or more, which can, in turn, further alter the land cover.

Preliminary computer modeling suggests that beetle kill can lead to temporary temperature increases of about 2-4 degrees Fahrenheit. This is partly because of a lack of foliage to reflect the Sun's heat back into space. Scientists also believe that beetle kill stimulates trees to release more particles and chemicals into the atmosphere as they try to fight off the insects. This worsens air quality, at least initially, by increasing levels of ground-level ozone and particulate matter.

Wildfires, clearcutting, and new development also affect the atmosphere by removing vegetation. But the impacts in each case can vary significantly, depending on the remaining vegetation and changes to soil conditions.

The exchange of gases and particles between the surface and the atmosphere is critical in arid areas such as the western United States. Even slight changes in precipitation can have significant impacts on the region.

"Here in the western United States, it is particularly important to understand these subtle impacts on precipitation," Guenther says. "Rain and snow may become even more scarce in the future as the climate changes, and the growing population wants ever more water."

While other field projects have measured emissions from plants, BEACHON is unusual because it will continue for at least four years and cover an entire region. This will allow researchers to examine the impacts of emissions in different seasons and measure year-to- year changes.

To conduct measurements, researchers plan to use specially equipped aircraft as well as towers that are about 100 feet high and measure emissions above the forest canopy. Additional observations will come from a variety of soil and moisture sensors, instruments for gases and tiny particles, radars, and lidars, which are radar-like devices that use light instead of radio waves.

"BEACHON will give us a very comprehensive picture of a forest's impact on the atmosphere," Guenther says. "But at this point, we don't know what the project will reveal. We may end up with more questions than answers. 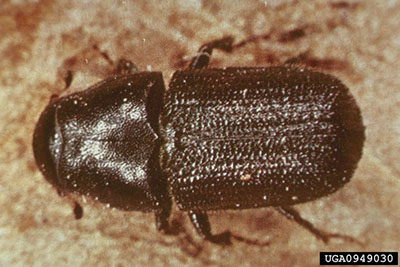 The mountain pine beetle (Dendroctonus ponderosae) is one of several types of bark beetles that attack evergreen trees across the West. [ENLARGE] (Photo courtesy USDA Forest Service and University of Arizona.) News media terms of use*