BOULDER—Plants in a forest respond to stress by producing significant amounts of a chemical form of aspirin, scientists have discovered. The finding, by scientists at the National Center for Atmospheric Research (NCAR), opens up new avenues of research into the behavior of plants and their impacts on air quality, and it also has the potential to give farmers an early warning signal about crops that are failing. 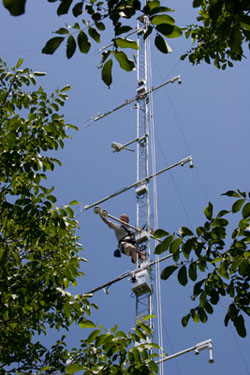 "Unlike humans, who are advised to take aspirin as a fever suppressant, plants have the ability to produce their own mix of aspirin-like chemicals, triggering the formation of proteins that boost their biochemical defenses and reduce injury," says NCAR scientist Thomas Karl, who led the study. "Our measurements show that significant amounts of the chemical can be detected in the atmosphere as plants respond to drought, unseasonable temperatures, or other stresses."

For years, scientists have known that plants in a laboratory may produce methyl salicylate, which is a chemical form of acetylsalicylic acid, or aspirin. But researchers had never before detected methyl salicylate in an ecosystem or verified that plants emit the chemical in significant quantities into the atmosphere.

The team of scientists reported its findings last week in Biogeosciences. The research was funded by the National Science Foundation, NCAR's sponsor.

Researchers had not previously thought to look for methyl salicylate in a forest, and the NCAR team found the chemical by accident. They set up specialized instruments last year in a walnut grove near Davis, California, to monitor plant emissions of certain volatile organic compounds (VOCs). These hydrocarbon compounds are important because they can combine with industrial emissions to affect pollution, and they can also influence local climate.

Karl and his colleagues speculate that the methyl salicylate has two functions. One of these is to stimulate plants to begin a process known as systemic acquired resistance, which is analogous to an immune response in an animal. This helps a plant to both resist and recover from disease. 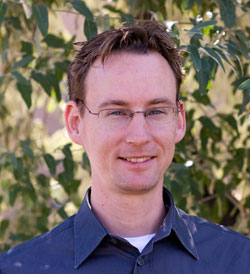 The methyl salicylate also may be a mechanism whereby a stressed plant communicates to neighboring plants, warning them of the threat. Researchers in laboratories have demonstrated that a plant may build up its defenses if it is linked in some way to another plant that is emitting the chemical. Now that the NCAR team has demonstrated that methyl salicylate can build up in the atmosphere above a stressed forest, scientists are speculating that plants may use the chemical to activate an ecosystem-wide immune response.

"These findings show tangible proof that plant-to-plant communication occurs on the ecosystem level," says NCAR scientist Alex Guenther, a co-author of the study. "It appears that plants have the ability to communicate through the atmosphere."

The discovery raises the possibility that farmers, forest managers, and others may eventually be able to start monitoring plants for early signs of a disease, an insect infestation, or other types of stress. At present, they often do not know if an ecosystem is unhealthy until there are visible indicators, such as dead leaves. 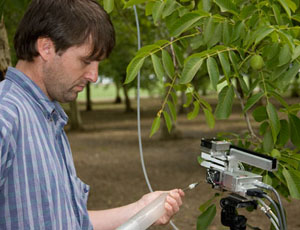 "A chemical signal is a very sensitive way to detect plant stress, and it can be an order of magnitude more effective than using visual inspections," Karl says. "If you have a sensitive warning signal that you can measure in the air, you can take action much sooner, such as applying pesticides. The earlier you detect that something's going on, the more you can benefit in terms of using fewer pesticides and managing crops better."

The discovery also can help scientists resolve a central mystery about VOCs. For years, atmospheric chemists have speculated that there are more VOCs in the atmosphere than they have been able to find. Now it appears that some fraction of the missing VOCs may be methyl salicylate and other plant hormones. This finding can help scientists better track the impact of VOCs on the behavior of clouds and the development of ground-level ozone, an important pollutant.

Title: "Chemical sensing of plant stress at the ecosystem scale"