BOULDER—Eric J. Barron was named director of the National Center for Atmospheric Research (NCAR) today, following a rigorous international search. He joins NCAR from the University of Texas, where he is dean of the Jackson School of Geosciences and holds the Jackson Chair in Earth System Science. Barron will join NCAR on or before August 1. 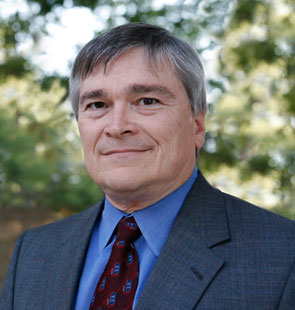 Eric Barron. [ENLARGE] (Photo courtesy of the University of Texas.)

"Eric is an outstanding scientist and educator with real vision and a deep understanding of NCAR based on career-long ties," says Richard Anthes, president of the University Corporation for Atmospheric Research, which manages NCAR for the National Science Foundation (NSF). "It is extremely unusual to find someone with experience and contributions to three fields. Eric is also a skilled and experienced administrator."

Anthes, who announced the appointment this morning, noted that the breadth of Barron's expertise will be especially important as NCAR extends its role in the Earth sciences through such undertakings as the creation of an Earth system computer model that will incorporate processes that take place as far away as the Sun.

Barron has authored or coauthored more than 120 peer-reviewed papers in geology, oceanography, and climate. He has chaired numerous NSF, NASA, and National Research Council (NRC) committees and panels, including the NRC Climate Research Committee, the NRC Board on Atmospheric Sciences and Climate, and NASA's Earth Observing System Science Executive Committee. He is a member of six professional societies and has been an editor of a number of climate and geology journals.

Barron's ties to NCAR range from student visitor to staff scientist, university collaborator, and most recently, chair of the UCAR Board of Trustees. He began his scientific career at NCAR as a geology graduate student. When he finished his Ph.D., he came to the center full time as a postdoctoral fellow and then an early-career scientist. Since moving to the university community he has remained a frequent collaborator with and scientific visitor to NCAR.

Barron plans to continue as an active scientist in his new position, in collaboration with other NCAR and university scientists. He is stepping down as UCAR trustee as of this appointment. Barron has been honored with the NASA Distinguished Public Service Medal, the Wilson Teaching Award from the Pennsylvania State University, and several other awards. He is currently chair of the Consortium for Ocean Leadership.