Computer analyses of global climate have consistently overstated warming in Antarctica, concludes new research by scientists at the National Center for Atmospheric Research (NCAR) and Ohio State University. The study can help scientists improve computer models and determine if Earth's southernmost continent will warm significantly this century, a major research question because of Antarctica's potential impact on global sea-level rise. 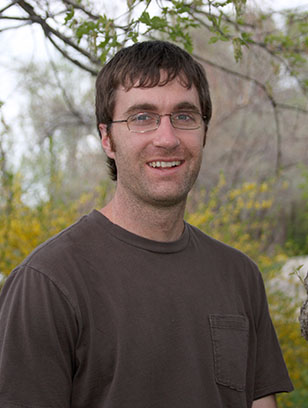 "We can now compare computer simulations with observations of actual climate trends in Antarctica," says NCAR scientist Andrew Monaghan, the lead author of the study. "This is showing us that, over the past century, most of Antarctica has not undergone the fairly dramatic warming that has affected the rest of the globe. The challenges of studying climate in this remote environment make it difficult to say what the future holds for Antarctica's climate."

The study marks the first time that scientists have been able to compare records of the past 50 to 100 years of Antarctic climate with simulations run on computer models. Researchers have used atmospheric observations to confirm that computer models are accurately simulating climate for the other six continents. The models, which are mathematical representations of Earth's climate system, are a primary method for scientists to project future climate.

Antarctica's climate is of worldwide interest, in part because of the enormous water locked up in its ice sheets. If those vast ice sheets were to begin to melt, sea level could rise across the globe and inundate low-lying coastal areas. Yet, whereas climate models accurately simulate the last century of warming for the rest of the world, they have unique challenges simulating Antarctic climate because of limited information about the continent's harsh weather patterns.

The study was published on April 5 in Geophysical Research Letters. It was funded by the National Science Foundation, NCAR's primary sponsor, and the Department of Energy.

The authors compared recently constructed temperature data sets from Antarctica, based on data from ice cores and ground weather stations, to 20th century simulations from computer models used by scientists to simulate global climate. While the observed Antarctic temperatures rose by about 0.4 degrees Fahrenheit (0.2 degrees Celsius) over the past century, the climate models simulated increases in Antarctic temperatures during the same period of 1.4 degrees F (0.75 degrees C). 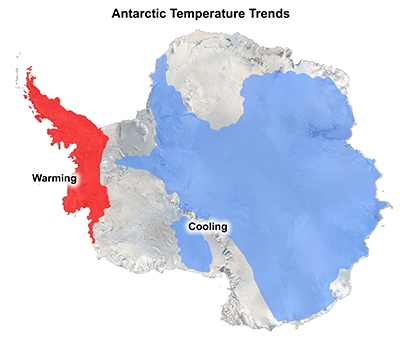 This map of Antarctica shows the approximate boundaries of areas that have warmed or cooled over the past 35 years. The map is based on temperatures in a recently-constructed data set by NCAR scientist Andrew Monaghan and colleagues. The data combines observations from ground-based weather stations, which are few and far between, with analysis of ice cores used to reveal past temperatures. [ENLARGE] (Illustration by Steve Deyo, UCAR.) News media terms of use*

Part of the reason that Antarctica has barely warmed has to do with the ozone hole over the continent. The lack of ozone is chilling the middle and upper atmosphere, altering wind patterns in a way that keeps comparatively warm air from reaching the surface. Unlike the rest of the continent, the Antarctic Peninsula has warmed by several degrees, in part because the winds there are drawing in warmer air from the north. The models generally capture these wind changes, although sometimes incompletely.

The study delivered a mixed verdict on Antarctica's potential impact on sea-level rise. The Intergovernmental Panel on Climate Change, which operates under the auspices of the United Nations, has estimated that sea-level rise could amount to 7 to 23 inches (18-59 centimeters) this century, in part because of melting glaciers worldwide. The Geophysical Research Letters paper suggests that warming in Antarctica over the next century could offset that by about 2 inches if the continent warms by 5.4 degrees F (3 degrees C), as computer models have indicated. The reason is that the warmer air over Antarctica would hold more moisture and generate more snowfall, thereby locking up additional water in the continent's ice sheets.

But the authors caution that model projections of future Antarctic climate may be unreliable.

"The research clearly shows that you can actually slow down sea-level rise when you increase temperatures over Antarctica because snowfall increases, but warmer temperatures also have the potential to speed up sea-level rise due to enhanced melting along the edges of Antarctica," says Monaghan, who did some of his research at Ohio State University before coming to NCAR. "Over the next century, whether the ice sheet grows from increased snowfall or shrinks due to more melt will depend on how much temperatures increase in Antarctica, and potentially on erosion at the ice sheet edge by the warmer ocean and rising sea level."

"The current generation of climate models has improved over previous generations, but still leaves Antarctic surface temperature projections for the 21st century with a high degree of uncertainty," adds co-author and NCAR scientist David Schneider. "On a positive note, this study points out that water vapor appears to be the key cause of the problematic Antarctic temperature trends in the models, which will guide scientists as they work to improve the climate simulations."