BOULDER—A much-discussed idea to offset global warming by injecting sulfate particles into the stratosphere would have a drastic impact on Earth's protective ozone layer, new research concludes. The study, led by Simone Tilmes of the National Center for Atmospheric Research (NCAR), warns that such an approach might delay the recovery of the Antarctic ozone hole by decades and cause significant ozone loss over the Arctic. 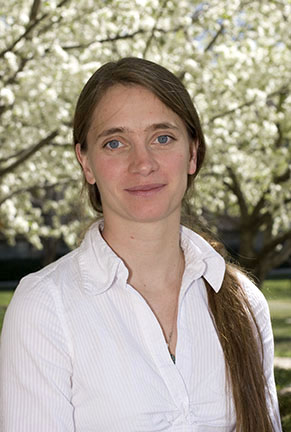 The study will be published Thursday in Science Express. It was funded by the National Science Foundation, which is NCAR's principal sponsor, as well as by NASA and European funding agencies.

"Our research indicates that trying to artificially cool off the planet could have perilous side effects," Tilmes says. "While climate
change is a major threat, more research is required before society attempts global geoengineering solutions."

In recent years, climate scientists have studied "geoengineering" proposals to cool the planet and mitigate the most severe impacts of global warming. Such plans could be in addition to efforts to reduce greenhouse gas emissions. One of the most- discussed ideas, analyzed by Nobel laureate Paul Crutzen and other researchers, would be to regularly inject large amounts of Sun-blocking sulfate particles into the stratosphere. The goal would be to cool Earth's surface, much as sulfur particles from major volcanic eruptions in the past have resulted in reduced surface temperatures.

Since major volcanic eruptions temporarily thin the ozone layer in the stratosphere, Tilmes and her colleagues looked into the potential impact of geoengineering plans on ozone over the poles. Sulfates from volcanoes provide a surface on which chlorine gases in the cold polar lower stratosphere can become activated and cause chemical reactions that intensify the destruction of ozone molecules, although the sulfates themselves do not directly destroy ozone.

The new study concluded that, over the next few decades, hypothetical artificial injections of sulfates likely would destroy between about one-fourth to three-fourths of the ozone layer above the Arctic. This would affect a large part of the Northern Hemisphere because of atmospheric circulation patterns. The impacts would likely be somewhat less during the second half of this century because of international agreements that have essentially banned the production of ozone-depleting chemicals.

The sulfates would also delay the expected recovery of the ozone hole over the Antarctic by about 30 to 70 years, or until at least the last decade of this century, the authors conclude.

Recovery of the ozone hole has been a major goal of policymakers worldwide. Nations agreed in 1987 to a landmark accord, known as the Montreal protocol, to restrict the production of industrial chemicals, known as CFCs (chlorofluorocarbons), that cause ozone-destroying chemical reactions. The ozone layer is critical for life on Earth because it blocks dangerous ultraviolet radiation from the Sun.

"This study highlights another connection between global warming and ozone depletion," says co-author Ross Salawitch of the University of Maryland. "These traditionally had been thought of as separate problems but are now increasingly recognized to be coupled in subtle, yet profoundly important, manners." 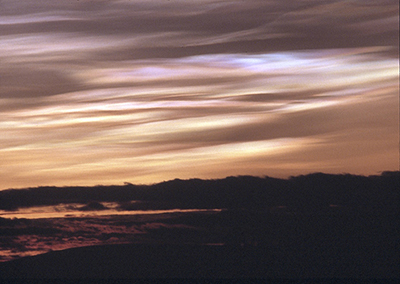 This sunset over northern Sweden in winter 1992 has a red tinge due to the presence of sulfate aerosol particles that were injected into the stratosphere by Mt. Pinatubo in June 1991. Also visible are polar stratospheric clouds, called mother-of-pearl, that consist of ice particles. [ENLARGE] (Photo by Fred Podlak, ©1992.)

To determine the relationship between sulfates and ozone loss, the authors used a combination of measurements and computer simulations. They then estimated future ozone loss by looking at two geoengineering schemes—one that would use volcanic- sized sulfates and a second that would use much smaller injections.

The study found that injections of small particles, over the next 20 years, could reduce the ozone layer by 100 to 230 Dobson Units. This would represent a significant loss of ozone because the average thickness of the ozone layer in the Northern Hemisphere is 300 to 450 Dobson Units. (A Dobson Unit is equivalent to the number of ozone molecules that would create a layer 0.01 millimeters thick under conditions at Earth's surface).

With large particles, the Arctic loss would range from 70 to 150 Dobson Units. In each case, the larger figure is correlated with colder winters.

The ozone loss would drop in the later part of the century to about 60 to 150 Dobson Units, depending on the size of the sulfates and the severity of winters.

The authors caution that the actual impacts on ozone could be somewhat different than estimated if atmospheric changes led to unusually warm or cold polar winters. They also warn that a geoengineering project could lead to even more severe ozone loss if a major volcanic eruption took place at the same time.

"Clearly much more research needs to be conducted to determine the full implications of geoengineering before we may seriously consider the injection of sulfate aerosols into the stratosphere," says co-author Rolf Müller of the Jülich Research Center in Germany.