BOULDER—Natural processes may prevent oceans from warming beyond a certain point, helping protect some coral reefs from the impacts of climate change, new research finds. The study, by scientists at the National Center for Atmospheric Research (NCAR) and Australian Institute of Marine Science (AIMS), finds evidence that an ocean "thermostat" appears to be helping to regulate sea-surface temperatures in a biologically diverse region of the western Pacific. 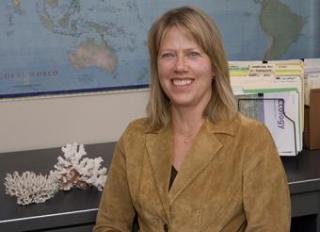 The research will be published online Saturday in Geophysical Research Letters. It was funded by the National Science Foundation, NCAR's primary sponsor, with support from the U.S. Department of Energy; the Japanese Ministry of Education, Culture, Sports, Science, and Technology; and AIMS.

The research team, led by NCAR scientist Joan Kleypas, looked at the Western Pacific Warm Pool, a region northeast of Australia where naturally warm sea-surface temperatures have risen little in recent decades. As a result, the reefs in that region appear to have suffered relatively few episodes of coral bleaching, a phenomenon that has damaged reefs in other areas where temperature increases have been more pronounced.

The study lends support to a much-debated theory that a natural ocean thermostat prevents sea-surface temperatures from exceeding about 88 degrees Fahrenheit (31 degrees Celsius) in open oceans. If so, this thermostat would protect reefs that have evolved in naturally warm waters that will not warm much further, as opposed to reefs that live in slightly cooler waters that face more significant warming.

"Global warming is damaging many corals, but it appears to be bypassing certain reefs that support some of the greatest diversity of life on the planet," Kleypas says. "In essence, reefs that are already in hot water may be more protected from warming than reefs that are not. This is some rare hopeful news for these important ecosystems."

Coral reefs face a multitude of threats, including overfishing, coastal development, pollution, and changes to ocean chemistry caused by rising levels of carbon dioxide in the atmosphere. But global warming presents a particularly grave threat because unusually warm ocean temperatures can lead to episodes of coral bleaching, in which corals turn white after expelling the colorful microscopic algae that provide them with nutrition. Unless cooler temperatures return in a few days or weeks, allowing algae to grow again, bleached corals often collapse and die.

Bleaching can occur naturally, but it has become increasingly widespread in recent decades. This is largely because sea-surface temperatures in tropical waters where corals live have increased about 0.5-0.7 degrees Fahrenheit (0.3-0.4 degrees Celsius) over the last two to three decades, with temperatures occasionally spiking higher.

However, between 1980 and 2005, only four episodes of bleaching have been reported for reefs in the Western Pacific Warm Pool. This is a lower rate than any other reef region, even though the western Pacific reefs appear to be especially sensitive to temperature changes. Sea-surface temperatures in the warm pool naturally average about 84 degrees Fahrenheit (29 degrees Celsius), which is close to the proposed thermostat limit. They have warmed up about half as much as in cooler areas of the oceans.

To study the correlation between temperatures and bleaching, the authors analyzed sea-surface temperatures from the period 1950-2006 in tropical waters that are home to corals, relying on measurements taken by ships, buoys, and satellites. They also used the NCAR-based Community Climate System Model to study computer simulations of past and future sea-surface temperatures. The team compared the actual and simulated temperatures to a database of coral bleaching reports, mostly taken from 1980 to 2005.

Will more warming raise the thermostat?

Researchers have speculated about several processes that could regulate ocean temperatures. As surface waters warm, more water evaporates, which can increase cloud cover and winds that cool the surface. In some areas, warming alters ocean currents in ways that bring in cooler waters. In addition, the very process of evaporation removes heat.

"This year, 2008, is the International Year of the Reef, and we need to go beyond the dire predictions for coral reefs and find ways to conserve them," Kleypas says. "Warming waters are just one part of the picture, but they are an important part. As we evaluate how and where to protect reefs, we need to determine whether the ocean thermostat offers some protection against coral bleaching."

The Western Pacific Warm Pool, which lies northeast of Australia, contains some of the warmest ocean waters in the world. Water temperatures in the warm pool have risen less than elsewhere in the tropics, which may explain why reefs there have experienced less coral bleaching. [ENLARGE] (©UCAR, illustration by Steve Deyo.)  News media terms of use*

Kleypas and her co-authors say more research needs to be conducted on the thermostat. In particular, scientists are uncertain whether global warming may alter it, raising the upper limit for sea-surface temperatures. Computer model simulations tend to capture the slow rate of warming in the western Pacific over the last few decades, but they show the warm pool heating rapidly in the future.

"Computer models of Earth's climate show that sea-surface temperatures will rise substantially this century," says NCAR scientist Gokhan Danabasoglu, a co-author of the study. "Unfortunately, these future simulations show the Western Pacific Warm Pool warming at a similar rate as the surrounding areas instead of being constrained by a thermostat. We don't know if the models are simply not capturing the processes that cause the thermostat, or if global warming is happening so rapidly that it will overwhelm the thermostat."