Inside the Colorado deluge

How much rain fell on the Front Range, and how historic was it?

Bob Henson • September 14, 2013  |  Even after the rains finally abated on Friday, I found myself struck by how the waterlogged air in Boulder felt oddly, almost eerily tropical. This only put an exclamation point on the weirdness of the week and its events. Four days of rainfall across Colorado’s Front Range produced massive flooding that’s marooned thousands of people, inundated many key roads, and damaged countless homes and businesses. 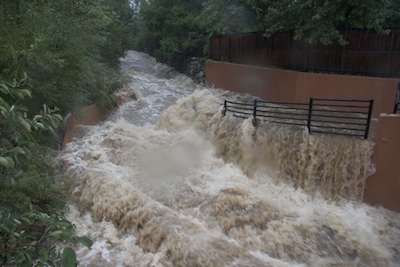 A bike/pedestrian path along Bear Creek in south Boulder—normally a placid thoroughfare—is engulfed by flood waters on Thursday afternoon, September 12. (Photo by Bob Henson, UCAR. This image is freely available for media & nonprofit use.)

Just how rare was this event? Was it a 100-year flood, or something bigger (or smaller)? As always, the answer depends on exactly what you’re looking at, and exactly where.

Rainfall: Off the charts

There’s no doubt that the rains in and near my hometown were truly historic, as evidenced by data from Boulder’s official weather station.

Part of the NOAA cooperative observing program, this station has been located at the NIST/NOAA campus in south Boulder since 1990. Boulder’s weather history actually extends much further back, to 1893, including the catastrophic 1894 flood that devastated central Boulder (more on that one below). 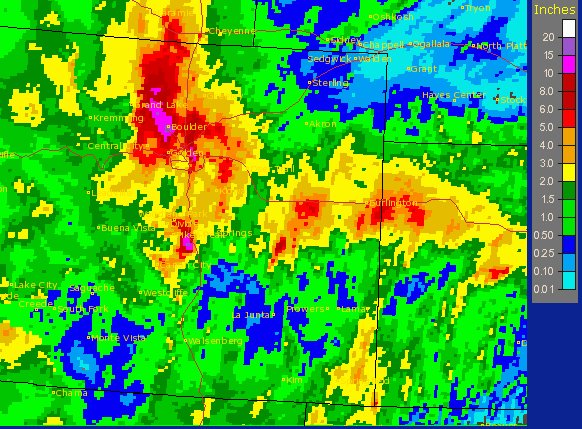 Rainfall amounts for the seven days ending at noon MDT on Friday, September 13, ranged from 5 to 10-plus inches across large swaths of the Colorado Front Range, with similar amounts eastward into northwest Kansas. (Image courtesy NOAA/NWS.)

The weather station was moved several times over that 97-year period, and observations weren’t kept as rigorously as today, so there are some missing data—though it’s unlikely an event as titanic as this week’s would have gone unobserved. 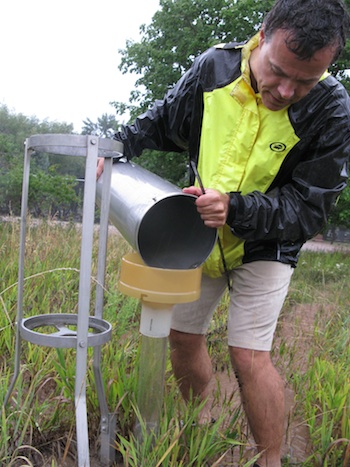 Matt Kelsch, a hydrometeorologist in UCAR’s Community Programs who volunteers with NOAA’s cooperative weather observing program, measures the historic daily total of 9.08 inches at Boulder’s official station on September 12. (Photo by Bob Henson, UCAR. This image is freely available for media & nonprofit use.)

Two things that helped make this rainfall historic are breadth and duration. Colorado can get much higher rainfall rates for brief periods and over small areas. One pocket of Fort Collins, Colorado, received more than 10 inches in less than six hours on July 28, 1997, leading to deadly flash floods there. However, it’s much harder to get the atmosphere to produce near-constant rain in large amounts for three-plus days across most of the semiarid High Plains and adjoining foothills of the Front Range.

Another unusual aspect is timing. Before now, the 10 heaviest single-day rains in Boulder history had all occurred between early April and early August. Interestingly, this week’s deluge followed a week-plus of record heat across much of the West that felt more like midsummer than September. Then the hot dome of upper-level high pressure shifted north and east, while a large but weak upper low set up shop across the western United States. With the main jet stream located well north into Canada, this pattern stayed in place for most of the week.

The immense amount of water that fell arrived at upper levels via a plume of deep moisture that surged northward from the tropics. At lower levels, the pattern drove moist air from the Great Plains toward the foothills, where it was forced upslope (see map). Together, these features blanketed the Front Range with the soggiest air mass ever recorded at Denver in September, as measured by radiosondes (weather balloons launched twice daily that sense the amount of water vapor through the depth of the atmosphere). 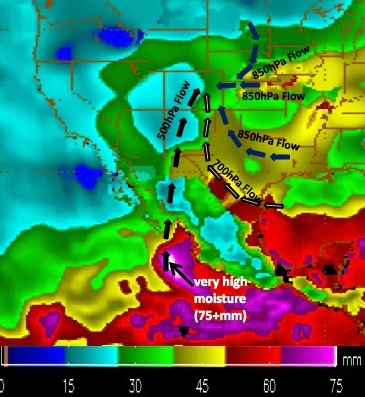 This map shows the amount of water vapor through the depth of the atmosphere (color legend at bottom in millimeters; 15 mm = 0.59 inches), as derived from satellite observations. The superimposed arrows show atmospheric flow at various levels, including 850 hPa (usually around 5,000 feet above sea level at this location and time of year), 700 hPa (around 10,000 feet), and 500 hPa (around 19,000 feet). (Image courtesy Sheldon Kusselson, NOAA.)

The transition from intense heat to heavy rain, and the weather features shown in the map, are similar to conditions more typical in July and August as part of the North American Monsoon pattern. They’re not so typical for September.

Engineers often refer to NOAA’s Atlas 14 to find frequency estimates: how often to expect precipitation of a given intensity and duration. Russ Schumacher (Colorado State University) used the atlas to calculate frequency estimates for the rains observed in the critical 48-hour window from 6 a.m. MDT Wednesday to 6 a.m. Friday. In doing so, Schumacher found that a large chunk of Boulder County and parts of several other state counties passed the 1000-year recurrence threshold.

This doesn’t mean that such a rainfall would literally be expected once every thousand years, like clockwork. Rather, it’s a statement of probability: a 1000-year rainfall has a 0.1% chance of occurring in any given year. Such values shouldn’t be taken as gospel—there are important caveats, including the hard-to-model behavior of the most extreme events—but they do suggest how truly noteworthy this week’s rains were.

“I think everyone who lives along the Front Range has known of the potential for a rain event that would produce ‘the next big flash flood’,” says Schumacher. “But I don't think anybody imagined that when it came it would cover such a large area and last so long.”

As for the floods themselves, it’s a bit more complicated to discern their precise rarity. For example, changes in the built environment—how streams are channeled, where parking lots replace fields, and so forth—affect how a flood moves through a watershed. So an identical weather event a century ago might produce a much different flood than the same event today. 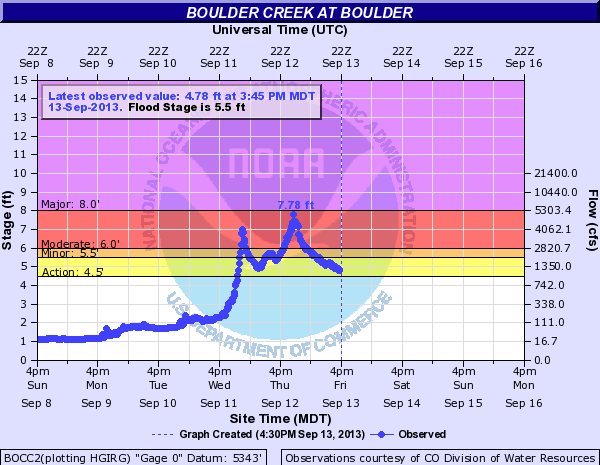 One of the main tools for measuring flooding is river gauges that monitor streamflow height. Scientists use the long-term records from these sites, along with models of the topography, meteorology, and hydrology of the surrounding watershed, to extrapolate the potential height of worst-case floods. As with the rainfall example above, the results are probabilistic: a “100-year flood” has a 1% chance of occurring in any given year, a 25-year flood has a 4% chance, and so on.

Near downtown, Boulder Creek—as measured just west of Broadway by a U.S. Geological Survey gauge—crested at an impressive 7.78 feet on Thursday evening, with an estimated flow of about 5,000 cubic feet per second (cfs). That’s the highest water observed downtown since the record flood of May/June 1894, when flows were estimated at more than 11,000 cfs and large swaths of downtown were inundated. That 1894 event saw lower precipitation amounts than were observed in much of Boulder County this past week, but the rains were accompanied by major runoff from snowmelt. In contrast, this week’s rains fell on a parched, snow-free landscape—at least one saving grace.

Why were some of the floodwaters in and near town apparently more extreme than those observed in downtown Boulder? Rainfall isn’t uniform across a region, so a given flood might be more extensive at one point along a river or creek, or in one part of town, than elsewhere. This week’s torrents included pulses of intense downpour embedded in steadier rain, so many smaller tributaries—engorged by these pulses—flowed into roads, homes, and yards where residents had never encountered such water before.

One can’t observe an event like this without reflecting on the longer-term, larger-scale picture. As a Climate Central article notes, one of the hallmarks of recent climate change in the United States and many other regions is a shift toward rain and snow being concentrated in more intense bursts, often with longer dry spells in between.

These trends, predicted by climate models, make physical sense. A warmer atmosphere can carry more water vapor, so when conditions are ripe for heavy precipitation, there’s more to work with. Slow-moving weather features also boost the odds of a prolonged event like this one, so researchers are continuing to investigate how and whether atmospheric blocking features will change in a future climate. 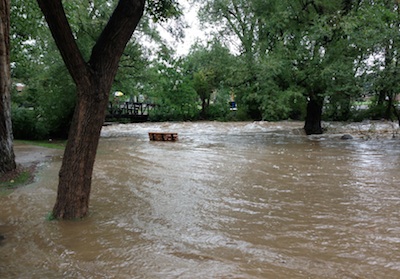 Not the day for bench-sitting: a scene along swollen Boulder Creek on September 12. (Photo by Bob Henson, UCAR. This image is freely available for media & nonprofit use.)

This week’s amazing deluge—which has affected neighboring states as well, including Kansas and New Mexico—should serve as an excellent candidate for an attribution and detection study. Through such work, scientists can use computer models to see how often similar events occur, both with and without the presence of greenhouse gases produced by human activity. It’s then possible to estimate how much the odds of such an event have been changed by fossil fuel use.

Even when researchers find that a given type of disaster has become more likely, a rare event is still going to be rare—and it can occur without any help from greenhouse gases. That’s why researchers have warned for decades about Colorado’s inherent vulnerability to flash floods. One of those researchers is geographer Eve Gruntfest, now at the National Science Foundation. Her landmark analysis of the Big Thompson disaster (see PDF), which killed 139 people on July 31, 1976—the evening of Colorado’s centennial day—resulted in the “climb to safety” signs now common across the region.

The late Gilbert White (University of Colorado) and his decades of research into flooding and safety are honored by a memorial marker at Boulder Creek and Broadway, showing the heights that floods of various return periods would reach. This week’s water appears to have risen above the 50-year level and topped out somewhere not too far from the 100-year mark.

When might the 500-year level be hit? It’s only a matter of time—though nobody can say exactly how much.

Update (Sept. 23):  It now seems the water may not have gone much past the 50-year level on the Gilbert White memorial, which would be roughly consistent with the flow indicated on the Boulder Creek hydrograph above. If I find a photo or a citable source, I'll add it here.