BOULDER, Colo. — Greenhouse gases are already having an accelerating effect on sea level rise, but the impact has so far been masked by the cataclysmic 1991 eruption of Mount Pinatubo in the Philippines, according to a new study led by the National Center for Atmospheric Research (NCAR).

Satellite observations, which began in 1993, indicate that the rate of sea level rise has held fairly steady at about 3 millimeters per year. But the expected acceleration due to climate change is likely hidden in the satellite record because of a happenstance of timing: The record began soon after the Pinatubo eruption, which temporarily cooled the planet, causing sea levels to drop.

The new study finds that the lower starting point effectively distorts the calculation of sea level rise acceleration for the last couple of decades.

The study lends support to climate model projections, which show the rate of sea level rise escalating over time as the climate warms. The findings were published today in the open-access Nature journal Scientific Reports. 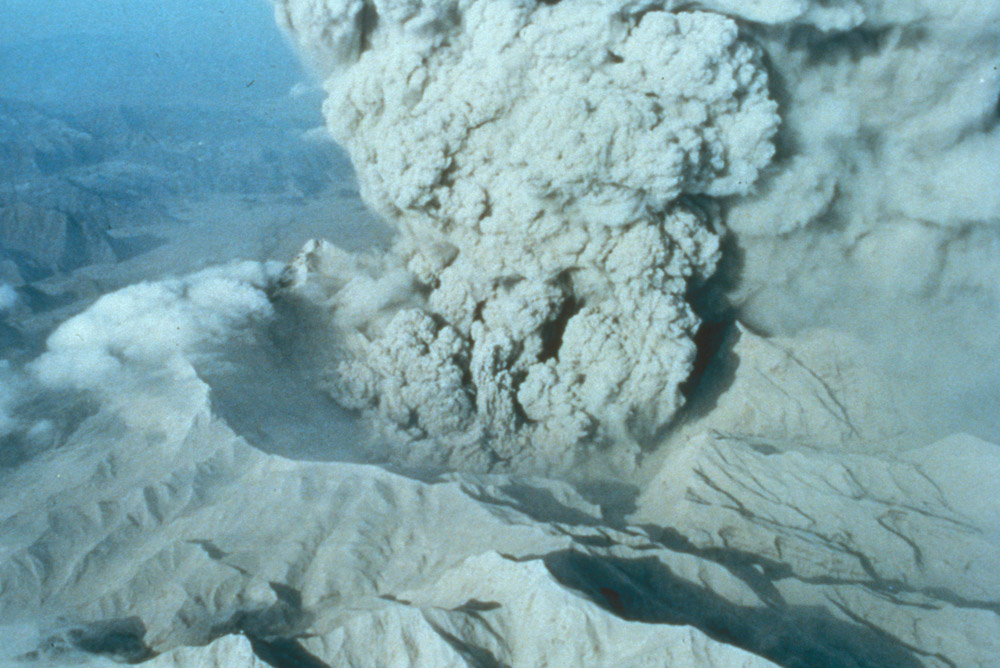 "When we used climate model runs designed to remove the effect of the Pinatubo eruption, we saw the rate of sea level rise accelerating in our simulations," said NCAR scientist John Fasullo, who led the study. "Now that the impacts of Pinatubo have faded, this acceleration should become evident in the satellite measurements in the coming decade, barring another major volcanic eruption."

Study co-author Steve Nerem, from the University of Colorado Boulder, added: “This study shows that large volcanic eruptions can significantly impact the satellite record of global average sea level change. So we must be careful to consider these effects when we look for the effects of climate change in the satellite-based sea level record."

The findings have implications for the extent of sea level rise this century and may be useful to coastal communities planning for the future. In recent years, decision makers have debated whether these communities should make plans based on the steady rate of sea level rise measured in recent decades or based on the accelerated rate expected in the future by climate scientists.

The study was funded by NASA, the U.S. Department of Energy, and the National Science Foundation, which is NCAR's sponsor.

Climate change triggers sea level rise in a couple of ways: by warming the ocean, which causes the water to expand, and by melting glaciers and ice sheets, which drain into the ocean and increase its volume. In recent decades, the pace of warming and melting has accelerated, and scientists have expected to see a corresponding increase in the rate of sea level rise. But analysis of the relatively short satellite record has not borne that out.

To investigate, Fasullo, Nerem, and Benjamin Hamlington of Old Dominion University worked to pin down how quickly sea levels were rising in the decades before the satellite record began.

Prior to the launch of the international TOPEX/Poseidon satellite mission in late 1992, sea level was mainly measured using tide gauges. While records from some gauges stretch back to the 18th century, variations in measurement technique and location mean that the pre-satellite record is best used to get a ballpark estimate of global mean sea level. 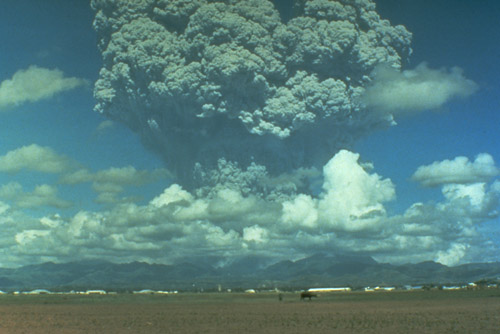 To complement the historic record, the research team used a dataset produced by running the NCAR-based Community Earth System Model 40 times with slightly different—but historically plausible—starting conditions. The resulting simulations characterize the range of natural variability in the factors that affect sea levels. The model was run on the Yellowstone system at the NCAR-Wyoming Supercomputing Center.

A separate set of model runs that omitted volcanic aerosols — particles spewed into the atmosphere by an eruption — was also assessed. By comparing the two sets of runs, the scientists were able to pick out a signal (in this case, the impact of Mount Pinatubo's eruption) from the noise (natural variations in ocean temperature and other factors that affect sea level).

"You can't do it with one or two model runs—or even three or four," Fasullo said. "There's just too much accompanying climate noise to understand precisely what the effect of Pinatubo was. We could not have done it without large numbers of runs."

Analyzing the simulations, the research team found that Pinatubo's eruption caused the oceans to cool and sea levels to drop by about 6 millimeters immediately before TOPEX/Poseidon began recording observations.

As the sunlight-blocking aerosols from Mount Pinatubo dissipated in the simulations, sea levels began to slowly rebound to pre-eruption levels. This rebound swamped the acceleration caused by the warming climate and made the rate of sea level rise higher in the mid- to late 1990s than it would otherwise have been.

"The satellite record is unable to account for everything that happened before the first satellite was launched, " Fasullo said. "This study is a great example of how computer models can give us the historical context that's needed to understand some of what we're seeing in the satellite record."

Understanding whether the rate of sea level rise is accelerating or remaining constant is important because it drastically changes what sea levels might look like in 20, 50, or 100 years.

“These scientists have disentangled the major role played by the 1991 volcanic eruption of Mt. Pinatubo on trends in global mean sea level,” said Anjuli Bamzai, program director in the National Science Foundation’s Division of Atmospheric and Geospace Sciences, which funded the research.  “This research is vital as society prepares for the potential effects of climate change."

Because the study's findings suggest that acceleration due to climate change is already under way, the acceleration should become evident in the satellite record in the coming decade, Fasullo said.

Since the original TOPEX/Poseidon mission, other satellites have been launched—Jason-1 in 2001 and Jason-2 in 2008—to continue tracking sea levels. The most recent satellite, Jason-3, launched on Jan. 17 of this year.

"Sea level rise is potentially one of the most damaging impacts of climate change, so it's critical that we understand how quickly it will rise in the future," Fasullo said. "Measurements from Jason-3 will help us evaluate what we've learned in this study and help us better plan for the future." 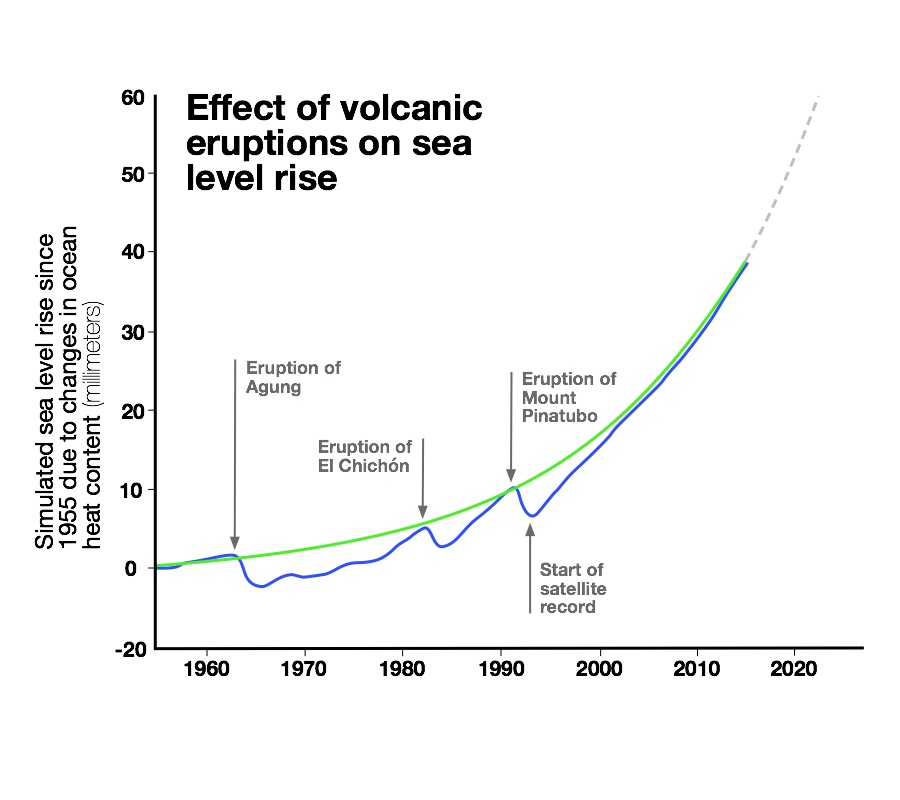 The graph shows how sea level rises and falls as ocean heat content fluctuates. After volcanic eruptions, the Earth cools and, in turn, the heat content in the ocean drops, ultimately lowering sea level.

The blue line between the start of the satellite record and present day makes a relatively straight line — just as we see from actual satellite observations during that time —  indicating that the rate of sea level rise has not accelerated. But in the future, barring another major volcanic eruption, scientists expect sea level to follow the gray dotted line, which is on the same accelerating path as the green line below it. Click to enlarge. (©UCAR. This graph is freely available for media & nonprofit use.)

Title: Is the detection of sea level rise imminent?