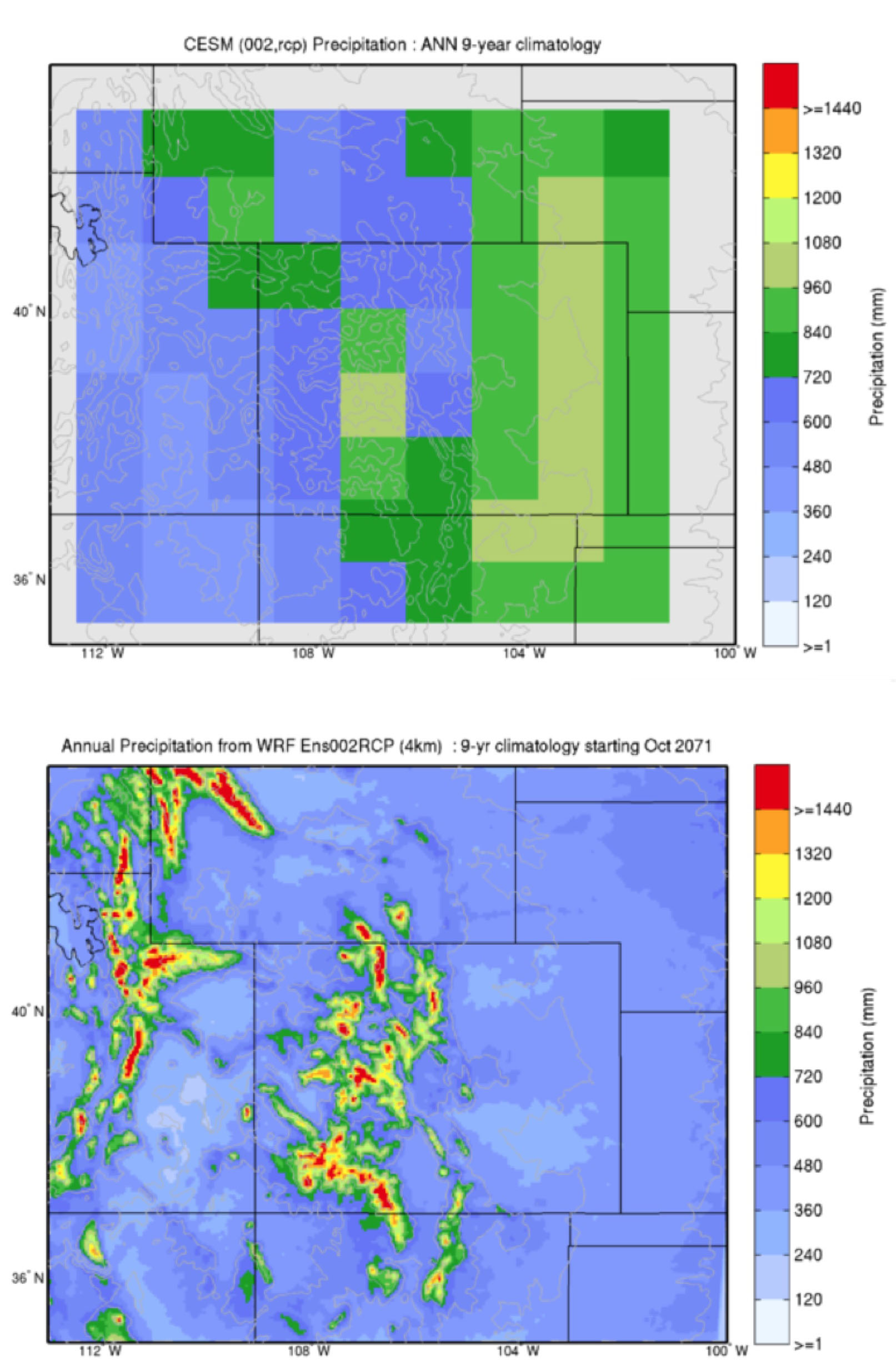 It's a practical reality that these models, which depict the entire planet, typically need to be run at a relatively low resolution due to constraints on supercomputing resources. But the result, a virtual morphing of peaks into hills, affects the ability of climate models to accurately project how precipitation in mountainous regions may change in the future — information that is critically important to water managers.

To address the problem, hydrologists have typically relied on two methods to "downscale" climate model data to make them more useful. The first, which uses statistical techniques, is fast and doesn't require a supercomputer, but it makes many unrealistic assumptions. The second, which uses a high-resolution weather model like the Weather Research and Forecasting model (WRF), is much more realistic but requires vast amounts of computing resources.

"ICAR is about 80 percent as accurate as WRF in the mountainous areas we studied," said NCAR scientist Ethan Gutmann, who is leading the development of ICAR. "But it only uses 1 percent of the computing resources. I can run it on my laptop."

How much precipitation falls in the mountains — and when — is vitally important for communities in the American West and elsewhere that rely on snowpack to act as a frozen reservoir of sorts. Water managers in these areas are extremely interested in how a changing climate might affect snowfall and temperature, and therefore snowpack, in these regions.

But since global climate models with low resolution are not able to accurately represent the complex topography of mountain ranges, they are unsuited for answering these questions.

For example, as air flows into Colorado from the west, the Rocky Mountains force that air to rise, cooling it and causing moisture to condense and fall to the ground as snow or rain. Once these air masses clear the mountains, they are drier than they otherwise would have been, so there is less moisture available to fall across Colorado's eastern plains.

Low-resolution climate models are not able to capture this mechanism — the lifting of air over the mountains — and so in Colorado, for example, they often simulate mountains that are drier than they should be and plains that are wetter. For a regional water manger, these small shifts could mean the difference between full reservoirs and water shortages.

"Climate models are useful for predicting large-scale circulation patterns around the whole globe, not for predicting precipitation in the mountains or in your backyard," Gutmann said.

Precipitation in millimeters over Colorado between Oct. 1 and May 1 as simulated by the Weather Research and Forecasting model (WRF), the Intermediate Complexity Atmospheric Research model (ICAR), and the observation-based Parameter-Elevation Regressions on Independent Slopes Model. (Images courtesy Ethan Gutmann.)

That's why using a model like WRF to dynamically downscale the climate data produces more reliable results — the model is actually solving the complex mathematical equations that describe the dynamics of the atmosphere. But all those incredibly detailed calculations also take an incredible amount of computing.

A few years ago, Gutmann began to wonder if there was a middle ground. Could he make a model that would solve the equations for just a small portion of the atmospheric dynamics that are important to hydrologists — in this case, the lifting of air masses over the mountains — but not others that are less relevant?

"I was studying statistical downscaling techniques, which are widely used in hydrology, and I thought, 'We should be able to do better than this,'" he said. "'We know what happens when you lift air up over a mountain range, so why don’t we just do that?'"

Gutmann wrote the original code for the model that would become ICAR in just a few months, but he spent the next four years refining it, a process that's still ongoing.

Last year, Gutmann and his colleagues — Martyn Clark and Roy Rasmussen, also of NCAR; Idar Barstad, of Uni Research Computing in Bergen, Norway; and Jeffrey Arnold, of the U.S. Army Corps of Engineers — published a study comparing simulations of Colorado created by ICAR and WRF against observations.

The authors found that ICAR and WRF results were generally in good agreement with the observations, especially in the mountains and during the winter. One of ICAR's weaknesses, however, is in simulating storms that build over the plains in the summertime. Unlike WRF, which actually allows storms to form and build in the model, ICAR estimates the number of storms likely to form, given the atmospheric conditions — a method called parameterization.

Even so, ICAR, which is freely available to anyone who wants to use it, is already being run by teams in Norway, Austria, France, Chile, and New Zealand.

"ICAR is not perfect; it's a simple model," Gutmann said. "But in the mountains, ICAR can get you 80 to 90 percent of the way there at 100 times the speed of WRF. And if you choose to simplify some of the physics in ICAR, you can get it close to 1,000 times faster."