BOULDER, Colo. — Expanding its work in renewable energy, the National Center for Atmospheric Research (NCAR) is launching a three-year project to develop specialized forecasts for a major wind and solar energy facility in Kuwait.

"We're putting our expertise and technology to work around the world," said NCAR Senior Scientist Sue Ellen Haupt, the principal investigator on the project. "This landmark project meets our mission of science in service to society."

The $5.1 million project will focus on developing a system to provide detailed forecasts of wind and solar irradiance at Kuwait's planned 2-gigawatt Shagaya renewable energy plant. After NCAR develops the system, the technology will be transferred to the Kuwait Institute for Scientific Research (KISR) for day-to-day operations. 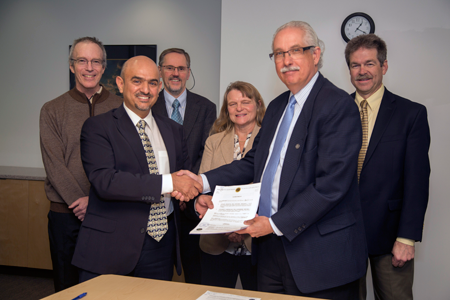 Salem Al-Hajraf of KISR and Antonio J. Busalacchi of UCAR shake hands over an agreement to create a renewable energy forecasting system. Behind them are NCAR scientists (left to right): Gerry Wiener, Branko Kosovic, Sue Ellen Haupt, and William Mahoney. (©UCAR. Photo by Carlye Calvin. This image is freely available for media & nonprofit use.)

The forecasts will help Kuwait reach its goal of generating 15 percent of its energy from renewable sources by 2030. With the ability to anticipate the amount of electricity that sun and wind will produce hours to days in advance, energy operators will be able to power up or down traditional plants as needed to meet demand.

"This technology will provide us with important benefits," said Salem Al-Hajraf, manager of KISR's Renewable Energy Program. "We are providing green energy to the grid using abundant sources of energy, which are sun and wind."

When electric utilities integrate power from intermittent sources such as wind or solar into the grid, they temporarily reduce or shut off traditional sources such as oil or natural gas. But if weather conditions fail to come together as expected, the utility may not be able to power up traditional plants in time to meet their customer needs.

To help utility managers anticipate renewable wind energy more reliably, NCAR has designed and is constantly improving a wind energy prediction system for Xcel Energy that has saved tens of millions of dollars for the utility’s customers in Colorado and nearby states. The specialized system relies on a suite of tools, including highly detailed observations of atmospheric conditions, advanced computer modeling, and artificial intelligence techniques that enable Xcel Energy to issue high-resolution forecasts for wind farm sites.

With funding from the U.S. Department of Energy, NCAR has also led a national team of scientists who have developed a cutting-edge forecasting system with the potential to save the solar energy industry hundreds of millions of dollars in the United States alone through improved forecasts. The new Sun4CastTM system, unveiled last year, greatly improves predictions of clouds and other atmospheric conditions that influence the amount of energy generated by solar arrays.

In Kuwait, the NCAR team will build on these technologies to develop both wind and solar energy forecasts. The scientists will customize the system to predict dust storms that can blot out sunlight and damage wind turbines. They will also incorporate the influence of nearby mountain ranges and the Persian Gulf on local weather patterns.

"This is a great opportunity to do research into dust and other particulates, which we haven't previously needed to focus on to this extent for wind and solar energy prediction," Haupt said. "This kind of work will pay multiple dividends for energy forecasting as well as better understanding and predicting of weather in certain desert environments."

Haupt and her team will collaborate with researchers at Pennsylvania State University and Solar Consulting Services in Florida, as well as with KISR.

"This is an exciting international partnership that will both generate significant economic benefits and advance our understanding of the atmosphere," said Antonio J. Busalacchi, president of the University Corporation for Atmospheric Research. "In addition to reducing energy costs for our partners in Kuwait, the knowledge that we gain will help us further improve weather prediction skills here in the United States."

KISR leads and partners internationally to develop, deploy, and exploit the best science, technology, knowledge, and innovation for public and private sector clients, for the benefit of Kuwait and others facing similar challenges and opportunities.

Sun4Cast is a trademark of the University Corporation for Atmospheric Research.