Raising forecasting skills in Africa and beyond

May 9, 2017 | Africa is particularly vulnerable to extreme weather, affecting food and water security and public health. In 2016 alone, Nigeria and South Africa suffered droughts, and Ethiopia's highlands were battered by floods.

But African meteorologists have been hindered by a relative dearth of weather observing stations and a lack of access to good forecast tools and training.

That's where the African Satellite Meteorology Education & Training Project, or ASMET, comes in. For 20 years ASMET, co-managed by the University Corporation of Atmospheric Research's COMET program, has helped fill the gaps by providing training to African forecasters on how to use satellite data to improve weather forecasts. 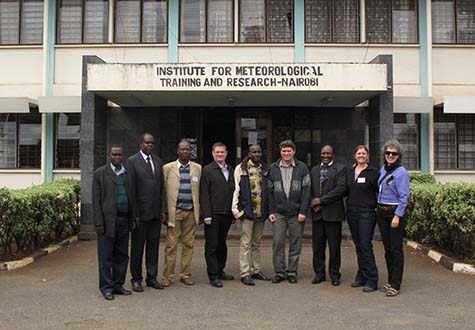 The project is funded by EUMETSAT (the European Organization for the Exploitation of Meteorological Satellites), which provides the equipment to download satellite data and the data itself to African meteorological services. EUMETSAT is an intergovernmental organization of 30 European countries.

"Radar and observations are very limited in Africa, so the main way that forecasters get weather information is through satellite imagery. ASMET develops training on how to use it," said Marianne Weingroff, an instructional designer and COMET's project manager on the international ASMET team.

"The overall goal of ASMET is to reduce the impact of weather-related disasters in Africa," added Vesa Nietosvaara, ASMET project manager with EUMETSAT.

The project began in 1997 when COMET conducted a nine-month training program on the instructional design process at UCAR for four meteorology instructors from the regional meteorological training centers in Kenya and Niger. They produced the first ASMET lessons and have played an instrumental role in bringing new people onto the project as it has expanded to include the weather services in South Africa and Morocco. The team selects topics of regional significance and develops the lessons, many of which are case studies.

Since its inception, the ASMET team has produced 20 self-paced learning lessons, offered online and on CDs, in English and French. The lessons have been viewed in 8,100 user sessions in 164 countries, indicating an interest far beyond Africa.

The lessons focus on satellite image interpretation.  It can be difficult, for example, to distinguish cloud types, and yet such interpretations can be critical in predicting storms. Beyond analyzing satellite images for general weather forecasting, the lessons cover the forecasting of high-impact events such as tropical cyclones, drought, floods, and even aviation weather. 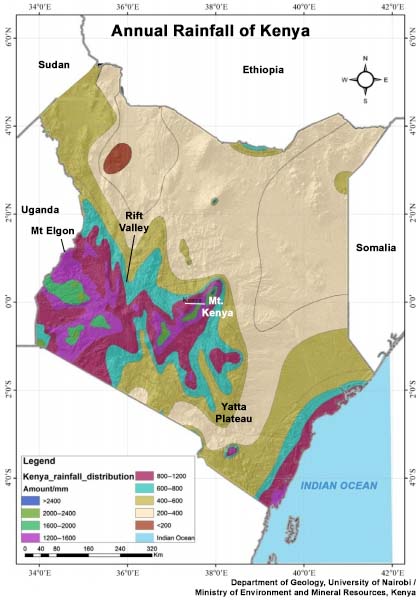 ASMET data, such as this rainfall distribution map, recently helped Kenyan forecasters prepare for a drought. (@COMET Standard Terms of Use.)

"There were concerns about aviation forecasts in Africa, so several years ago we created a series of case studies to teach forecasters how to improve them by using satellite imagery to predict different types of aviation weather, such as fog and clear air turbulence," Weingroff said.

Ignatius Gitonga Gichoni, an ASMET team member with the Kenya Meteorological Service, said ASMET has had a clear, positive impact on forecasting.

"A good example is the current seasonal drought that affected most of Kenya and neighboring countries," he said. "The forecast for the season, which we call the 'long rains' of March, April, and May, indicated rainfall at depressed levels. We issued alerts and reminders to the authorities so everybody would be aware of the impending situation. "

Henk Verschuur, the first ASMET project manager at EUMETSAT, cited the vitality of the program over the years. "It must be remembered that most of the team members work on ASMET outside their regular duties, which makes its longevity and success even more remarkable," Verschuur said.

Both the COMET and EUMETSAT ASMET program managers say that the different cultural and religious backgrounds of the team members have made for colorful discussions. At one team meeting, Weingroff recalled, members pored over Google Earth, looking to see where everyone was from, down to their neighborhoods and even houses.

"For some, it was a huge deal just to finish elementary school and be selected to attend high school. Nevermind advanced training," Weingroff said. "Their lives are complex, with some working extra jobs to make ends meet, etc. I've never known people from such profoundly different backgrounds who work together with such comaraderie and dedication. We work hard but also enjoy each other a lot."

Said Bruce Muller, COMET's international manager, "We're really trying to rally a diverse group of people toward the common cause of improving forecasts."